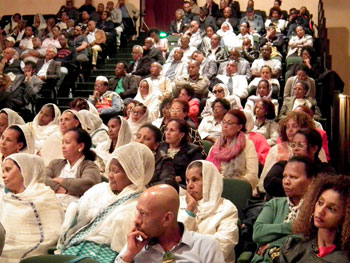 Eritrean nationals residing in Italy, Central and Western US as well as in the UK held different diplomatic activities.

Asmara, 27 April 2017- Eritrean nationals residing in Italy, Central and Western US as well as in the UK held different diplomatic activities.

At the seminar the Eritrean nationals residing in Milano and its environs conducted, the Eritrean Ambassador to Italy, Mr. Fesehatsion Petros pointed out that the strong unity and love of country of the Eritrean people is the secret for the prevailing peace and stability and that persistent effort is being exerted to build economically strong country and to ensure social justice.

Ambassador Fesehatsion also called on the nationals to develop organizational as well as economic and professional capacity and reinforce contribution to the national development programs.

Commending the discipline and love of country the Eritrean nationals are demonstrating, Mr. Enrico Marcora, adviser to the Mayor of Milano, expressed readiness to strengthen the relation between the Eritrean community and the Municipality of Milano.

In the same vein, members of the German National Union of Eritrean Women branch conducted seminar on 22 April in Frankfurt.

In the seminar six months activity report was presented and the participants conducted extensive discussion as regards recruiting new members.

At a seminar in which members of YPFDJ, NUEYS, and other nationals from 13 States took part, Mr. Berhane Gebrehiwet, Charge d’Affairs at the Eritrean Embassy in the US and Mr. Dawit Haile, head of Community Affairs, gave extensive briefings on the objective situation in the homeland and the significance of active participation in strengthening organizational capacity.

The participants on their part expressed readiness to strengthen participation in the national development program and portray the true image of their country.

The YPFDJ branch in Birmingham, the UK, also conducted its annual congress, according to report.