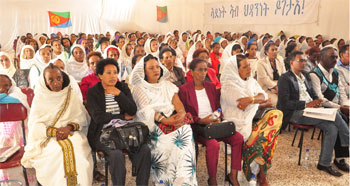 Board of the National Union of Eritrean Women in the Central region conducted first Congress this week.

Asmara, 29 April 2017 –  Board of the National Union of Eritrean Women in the Central region conducted first Congress this

week. Ms. Tekea Tesfamichael, Chairperson of the NUEW, said that the Union is exerting the necessary effort to develop women’s professional and economic capacity in addition to promoting their participation in political and socio-economic  programs.

The Head of political and organizational affairs in the NUEW branch in the Central region, Ms. Solomie Gebreselasie, stated that the Union is striving to eradicate harmful practices in partnership with stakeholders. She also called on women to strengthen organizational capacity and boost

participation  in the work place.

Ms. Liya Gebreab, Head of tourism branch in the region, explained that the newly established NUEW board would make significant contribution in the implementation of the envisaged programs.

Crocodile Tears: Cover for Real Threats in the Horn Region