Profession driven by Passion and Commitment 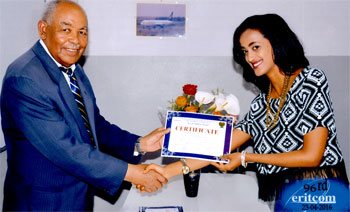 On today’s Q&A, we are glad to share a rather short chat we had with an elderly who is a great example of hard work and devotion to his profession. Now 87, Mr. Yaqob Weldekrstos has served as a teacher and at numerous positions at the Ethiopian Airlines. After his retirement he has been determined to share his experiences with the youth and has been doing so over the years.

Please take us back to your youthful years, Mr. Yaqob.

My pleasure, I was born in 1932 in a village called Geshnashm. When I was a 6th grade student, Eritrea was under the British Protectorate and already I was working as a teacher in rural areas for three years. Afterwards, I went to Adwa, Ethiopia, for another three years to study pedagogy. Once again, upon my return to Asmara, I took teaching as my professional job for another eight years. With an intent to enhance my qualifications, I begun taking evening classes in 1963 at the University of Asmara and graduated with a Commerce diploma in 1965. I was working and taking classes besides raising a family as I was married and was blessed with kids. Later that year I was employed at the Ethiopian Airlines as a cashier besides continuing my education at the University for a Degree in Accounting Administration and graduated in 1973.
Your experience as a teacher.

I was not entirely attached to my teaching career at the beginning as I was young. I didn’t understand it well. It is only after my return from Adwa that I really understood and fell in love with teaching. Let me tell you, it is a great delight to see people, who you have instructed, becoming someone in life. It is absolutely a thrilling feeling, and being a teacher is one of the greatest satisfactions I had experienced in my lifetime. It is a profession, which demands great patience and dedication but also has a satisfying result.

I first began working at the Airlines as a cashier. Nevertheless, I was able to do a good job since I had the educational background in accounting. At the time, the airlines was one of the biggest and was of American standards. It had a strong management and you can just imagine how much money was involved, I was the one who was in charge of all the airlines’ income. With time I soon registered myself at the workers association of the airlines and became the administrator of the Asmara branch. Which allowed me to gain great knowledge of the airlines business, handling employees and customers.

Despite my effective work at the airlines I wasn’t able to get to high management positions as I was working as undercover for the Hafash Wudubat (underground movement for Eritrea’s independence in Eritrean cities, villages and in the Diaspora). Our job was to bring significant information to the freedom fighters. Afterwards, I was promoted as a ticketing agent and worked until 1979. Subsequently, I was arrested as our wing of Hafash wudubat was discovered. I couldn’t go back to working as the airlines couldn’t trust us anymore and I don’t blame them, but luckily, I was employed as an administrator for the cargo service for almost ten years. What I learned during my airlines career is that the airline job is a bit complicated and can only be done through teamwork. It was a great experience for me.

After independence, I continued working at the cargo service, especially since I had 10 years of experience at the department. I worked there until I retired in 1993. Even after my retirement, I was asked to give trainings on different levels of airlines business, customer service and other departments for several governmental institutions.

Eritcom (Eritrean Communication Development Institute) it is an organization which stands to enhance the capacity of Eritrean youth. To provide them with different crash courses to lead their lives with and understand the importance of knowledge. At the start of the institution, we instructed members of the National Union of Eritrean Youth and Students (NUEYS) on how to lead seminars, secretariat sciences, and finance. And today we have many students who were instructed by Eritcom serving in diverse positions. Again, we have also taken part in teaching Eritel’s members in customer services. Similarly, we gave lectures and training to the Lilo freight transportation group on how to handle customers and deliver goods. These are few of the governmental institutions that Eritcom was involved with in enhancing their knowledge in different divisions. All in all, the institution had taught and trained over 4,019 students over the years, which I believe is a great youth capacity building.

The famous tea time you have at Eritcom…

Believe me it is not for an advertisement. That tea time is a time for me and my students to get close and talk about things like family. Almost 99% of my students are female and I genuinely care for them. I never want them to suffer due to low self-teem. I want them to understand that they are capable of doing great things and lead their lives without fear. The tea break is the time used to advise them to be strong and put their minds into achieving great things. I want them to think of me as a father and teacher. I make the tea myself and we enjoy a very short yet very productive break. And trust me that gets us closer, even after their graduation from the institute, most of them keep in touch with me.

Yes. I want to remind the Eritreans about something. We had a very good culture and work ethics, please let’s not spoil it. Let’s teach our children the meaning of our good culture and let them understand the importance of education and working hard. We are in a time where the Western world culture is affecting almost the whole world, let’s use the technologies in the most useful ways and not get addicted to it. I once again want to tell the youth, have a heart that works for the goodwill, and be a good example to your peers and work hard to achieve your dream.