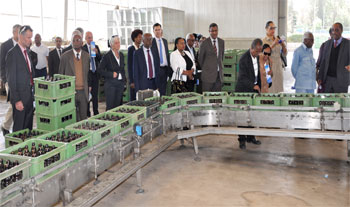 As to our social value, work is compared with dignity of the society. It goes like “No work, No dignity!” so value of work is very high in Eritrean society. To enhance work habit of citizens the government is putting efforts by organizing workers association for long.

The National Confederation of Eritrean Workers (NCEW) has taken the task of organizing workers as the top priority of its undertakings. It strongly believes that the organized and institutionalized way of working is the best course, for the preservation and respect of workers’ rights and interests.

As the continuation of its objectives beneficial for the national cause that started early on during the period of the liberation struggle, in the course of the last ten years the NCEW has been organizing the Eritrean workers in all the six administrative regions based on the Eritrean labor proclamation No.118/2001.

Like any other organizing processes, the development of rallying and organizing workers undoubtedly gains prominence

with time and rise of consciousness. Beyond the physical gathering, organizing people and workers involves a very arduous task of aligning the diverse outlooks and visions of the members to a certain degree of proximity. The person deployed in this task should be qualified enough with the knowledge of the objectives and missions of trade unions and possess the necessary communication skills. He /she is expected to be committed to his/ her duties and prove to be exemplar in the objectives and beliefs he/she upholds. Taking these factors into consideration, the NCEW has been engaged in organizing workers by forming and deploying ‘organizing committees’ which are provided with adequate theoretical and practical education and training. At present, it can be claimed that the majority of workers across Eritrea understand the essence of becoming organized.

Beyond the ascertainment of their rights and interests, the NCEW works on bringing about productivity at a national and industrial levels. This is because when one speaks about the rights of workers, it is clear that achieving increased productivity has to be taken into consideration. In order to raise workers’ productivity to its highest level, therefore, as a representative of the Eritrean workers, the NCEW carries on to deliver its mission working through its organs categorized in five Federations and Base Unions.

The NCEW does not only work among workers employed in the formal economic sectors. But it has also been taking planned actions to expand and strengthen its domain by organizing workers engaged in the informal sector into cooperatives and associations. The collaboration of the offices of local administrations, PFDJ and other government institutions has given a great impetus to the process.

At present, there are 158 base unions organized in five federations under the umbrella of the NCEW. Taking the stock of international conventions and the Eritrean labor proclamation in to consideration, the NCEW still strives to go beyond the present level, to reach and organize the other unorganized workers in ways that are beneficial to the country. One of these approaches is the establishment of cooperatives.

Like in all other developing countries, as the Eritrean economy is largely based on small scale labor intensive and unproductive agriculture is moving towards the modern science and technology driven industrial and service providing economy. In order to become efficient and move forward, the human capacity which is scattered in various forms has to be more organized than the present form. The NCEW strongly believes that when the available human resources are brought together and managed properly in a scientific and modern ways, there is no doubt that they can easily secure the demand and supply of resources for the people and the country. The formation of cooperatives will definitely play a big role in the stabilization of markets and enhancement of the transition from small scale to massive advanced economy.

On the 1st of May 2017, the 25th National Workers Day was celebrated at Asmara Beer Factory. It was prepared by the factory members cooperating with the NCEW in which many members have participated. There were participants from Ministry of Labor and Social Welfare, from People’s Front for Democracy and Justice (PFDJ) as well as other participants. It was celebrated with quite interesting programs which included tour of the Brewery to show the concrete activities of the workers in the factory. What it made the day different was that the 7th NCEW congress was commemorated under the theme of “STRONG ORGANIZATION FOR ROBUST UNION!” for two days with a strong aim in enhancing the work habit of Eritrean society.

In the occasion, the Secretary General of the National Confederation of Eritrean Workers Mr.Tekeste Baire underlined in his speech that the exceptionality of the occasion was that NCEW had a forum, the forum of the 7th congress as a workers organization from March 27 up to 29 of 2017 with an objective to bring transformation of a more effective and productive union through a better organization that takes place after conducting an assessment of past experiences’ strengths and weaknesses.

Mr. Tekeste added that the NCEW will attempt to search for a better platform that may advance the organizing motion which has been oscillating up and down. The NCEW will continue with greater zeal the pursuit of establishing and strengthening relations, which it has been building since the time of the revolution, with regional and international partners.

Similarly, Mr. Kahsay Gebrehiwet, Minister of Labor and Social Welfare in his speech highlighted that work and society cannot separate from one another; they always go together that work is the only way to insure the spiritual and material needs of the society. Accordingly, the efforts of NCEW in encouraging individuals believing to work together constantly, he said brings radical change in securing productive and healthy society. He added that extracting natural resources of the nation and distributing them equally among the population to insure life and harmony of the society is the main output of working without vacillating. All in all, the NCEW’s main focus is building strong organization, to have an effective union in safeguarding the value of work in Eritrea. Organization in terms of quality and quantity in order to reach at the higher tip of victory, however, requires the participation and contribution of each and every member of the Eritrean society.