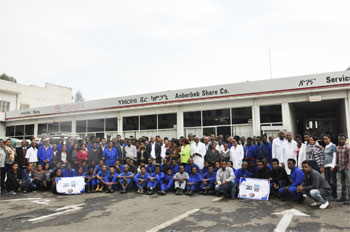 Cars have counted centuries since they have become part of our lives. Their revolution in transporting materials and people has gradually changed life styles. Looking back to history of automobiles we find different dates being attributed when the first car was invented and all of the dates started around 1789-1846. One of the first “real” automobiles was produced by Frenchman Amédée Bollée in 1873, who built a self-propelled steam road vehicle to transport groups of passengers.

There are many links from cars in general but mostly involving transportation. No car simply means no expedition at all. Besides it’s another industry that many people are earning money for living.

As far as transportation is concerned, the main car importer company in Eritrea is the Anberbeb Share Co. (ASCO). How everything startd with this co. is our todays’ development column coverage. It was initially established in 1984 during the armed struggle days under the Eritrean People Liberation Front (EPLF) in Sahl area in a place called Anberbeb. Basically, the objective of the garage was to repair and fix the numerous Toyota’s providing service in those days. In August 1992, the company reestablished itself as a business enterprise to continue providing after sales services. Starting from this stage, the co. has engaged itself in delivering maintenance services, selling spare parts, becoming an oil filling station, and washing service for small and big trucks. To improve its business activities the company invested ERN 5,000,000 and drafted its Articles and Memorandum of Association in late 1995 renaming itself Anberbeb Share Co. or ASCO. The capital in later years was upgraded into ERN 30,000,000 so as to match its time to time growing operations and revenues.

As of the moment, ASCO is an official representative of the Japanese car companies namely Toyota, Yamaha and Komatsu. Agreement to work as a representative of Toyota Company did not only mean introducing Toyota’s production rather taking the responsibility of offering the after sales service. The after sales service (preparing spare parts and providing qualified service) of this company provides the backbone of the sales activity. As a reflection to this, the number of Toyota cars in Eritrea has dramatically increased in the following years. Before 1995 most of the cars in Eritrea were FIAT. After 1996, however, Toyota cars are seen to dominate the traffic of the country. According to the data from land transportation authority, to this date, there are around 16,314 Toyota cars, more or less 68.68% of all cars moving in the country roads.

Later on May 1998, to enhance the production line, Anberbeb preferred to add another representation for Komatsu. Most of the machineries introduced in the country such as loaders, graders excavators, cranes, crushers, rollers and many more others are Komatsu’s products. On the very same year, another a deal was made with the Yamaha Company. Before having the deal with Yamaha there was an 85% of the Yamaha Outboard Engine in the Red Sea. Exploiting market opportunity was a good idea and so an outlet was opened at the coast. Nowadays, Yamaha motor cycles are witnessed in sheer number in the country. Lest to mention, Yamaha Marine accessories are commonly used with sailors and seamen. Besides, most recently, Anberbeb, has started business relations with Yanmar diesel engine manufacture company located in Osaka, Japan.

Anberbeb commits itself to providing the sales and after sales service for the three represented companies. So far, the after sales service of Toyota and Yamaha is well taken care of and the Komatsu after sales service is progressing. To assist the after sales service and overall service the technology transfer from Japan is crucially important to enhance employee standards. As a distributor for and agent of the three companies in Eritrea Anberbeb Share Co. has won many developments over the years. To mention some, it enabled itself to import around 70% spare parts of the of Toyota and Yamaha, to institute the Toyota Manufacturing Company (TMC) training session and get advanced technical services, to introduce warranty system into its operations. Most of all Toyota and Yamaha owners or drivers make the habit of periodic service to their automobiles which the company highly recommends to everyone.

A car that made it through ASCO gets a warranty of three years or within 100,000 km coverage. Technology transfer, lower prices, and trainings from Japan companies are constant. 170 Toyota representatives throughout the world are aligned to provide cars of these companies. More than 40 are situated in the continent of Africa. Core competence of the ASCO is training the human resource. Mr. Ghirmay Abrehe, General Manager of the company, believes that manpower development is crucial for company advancement. He further said that, since cars these days are becoming sophisticated and computerized, the manpower needs to be upgraded. Trainings such as maintenance aimed at Toyota technicians, frequent repair training categorized as Pro technician training, Diagnosis Training, as well as Advanced Diagnosis training to make trainees Master technicians in diagnosis are provided. A refresher training for new model mechanisms and also Latest Diagnosis training is also provided. The training center was established in 1997 after having the agency’s certificate and is abided by the curriculum of TMC.

Team assessment looks for team spirit inside the co. Thus, last week ASCO has conducted a team assessment week looking for a team spirit inside operations. The team spirit idea is organized by meetings between unit heads and members, section heads with unit heads, department heads with section heads and General Manager with department heads to find solutions to recent challenges encountering the company and is performed for about an hour on daily basis. Last week alone the company was able to conduct 91 meetings covering several issues.

For overall company effectiveness, Anberbeb strives for a team led work, transparency and accountability with in the personnel and management. Employee complaints are always respected. Complaints from employees are directly heard by the management without any bureaucratic procedures so as to improve work efficiency and avoid challenges instantly. Paperwork is minimized, efficiency is maximized and the employees in a team work spirit are completely in charge of their assigned activities.

The company continually operates under the systems and code of conducts adopted from TMC production systems, one of which is the Just in time (JIT) and Kaizen approaches (continuous improvement). JIT approach or production system seeks to avoid wastage and keeps zero inventories. This system in distributors such as Anberbeb is applied in a way that enhances the service efficiency to result in optimum customer satisfaction. As per TMC standards, Toyota members seek to continually improve their standard processes and procedures in order to ensure maximum quality, improve efficiency and eliminate waste, so do ASCO employees. This is what Kaizen means, and is applied to every sphere of the company’s activities. It is the heart of the Toyota Production System.

The assessment technique of the company evaluates that if only three out of 100 cars which received after sales service are brought back for any reason then target plan is achieved. Yet, if the number exceeds three percent, then a reassessment and table of discussion is arranged. Every activity is based on a policy enacted from TMC, that is, Plan, Do, Check, Action. This is a separate cycle which helps employees’ process activities in most efficient ways. Many procedures of the company are executed based on TMC policies drafted for 2014- 2018.

Staff of the company are technical school graduates, automotive technicians and mechanical engineering graduates. The technical and administration staff, being on teams, are highly dedicated, educated and competent. The workshop is fully equipped with skilled personnel, special tools and equipment and can diagnose, handle any type of repairs and overhauls. At present the company employs 183 personnel. The company performs its activities through seven departments: Personnel administration and general service section, Komatsu Department, Toyota Service Department, Toyota Parts Sales Department, Marketing and Toyota Sales Department, Yamaha Department, as well as Finance Department.

On annual basis, total sales of vehicles, Yamaha products, auxiliary equipment and spare parts is estimated around ERN 90,000,000.00 and it is expected to increase gradually as the market expands.

The company is preparing itself to accommodate future expansion of trading in small scale industries. According to Mr. Ghirmay, new and modern premises will be built in the near future. Moreover, to provide comprehensive services across the country, opening of branch offices in the various regions are on plan. Future plan of ASCO is to improve overall services based on the Kaizen philosophy. The day-to-day improvements those members and their team leaders make to their working practices and equipment including the early morning meetings mentioned earlier are parts of this.

All of these facts and endeavors are for ensuring one and one thing only-the ultimate satisfaction of customers. ASCO, through its after sales service, tirelessly strives to build a management for good customer relationship and to hand customers the services needed. Hence, by doing this for decades the company has already gone miles away in experience.