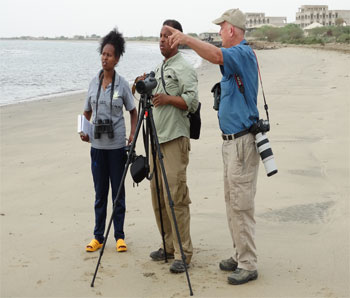 I am an ornithologist and I have been watching birds all of my life. This means more than 50 years of bird watching. I am lucky enough to have made a carrier out of my interest. My carrier had parts to it: I was a publisher. I published books on nature until my retirement a few years ago. But for even longer I have been and I still am a tour leader. I lead bird watching holidays all over the world. I have led about a 120 bird tours now.

There are tons of people who are interested in birds. Many of them are adventurers but for others it is a bit more serious, maybe a science research. Bird watchers mostly are either of a well-paying job because it is not a cheap activity, or they are retired and they’d like to have a tranquil vacation. These are people who pay thousands of pounds to be active and move around the world watching birds, and also venture in fantastic places where wild life is rich.

I am well connected. One of the things that I do is networking and so if someone asks me of someone else interested in birds, I would know. People come together to enjoy this leisure activity. There are an estimated 50000 active bird watchers in Britain; it might even be even more.

I can’t remember not being interested in birds. It started when I was very, very young. I was always spotting birds and birds net from a very young age. I never really study birds. I did biology. In those days you couldn’t study birds so I’ve never been an academician. So I consider myself largely self-taught.

A lot of people think of publishing as writing. Although I have authored books of mine but I have published hundreds of books. I worked for Bloomsbury which is one of the biggest companies in Europe. Also, we were the largest publishers of books related to nature and birds especially, certainly in Britain.
But I have also written 3 books. The last book I wrote was a field guide to the birds of the Horn of Africa. And my interest in the Horn of Africa started when I first visited Ethiopia in 1987.

In my publishing job, a field guide friend was supposed to write about the birds in the Horn of Africa. But he didn’t do much and so I tried to find somebody else to write the book. I couldn’t find anyone else so I did it myself. It was published in 2009. It covers the region of Eritrea, Ethiopia, Djibouti and Somalia. And so that has become my area of interest really. I have been coming to the Horn of Africa for a long time. I have led about 50 tours to Kenya. I have been to Yemen and to Somalia. But I had never been to Eritrea until now.

Back in 2009 when my book was published there was a tourism gala in London. And the stand of Ethiopia had a big space with m o r e t h a n the 30 airlines. Next to it was the Eritrean stand. It was rather small but packed with so many beautiful things and it was staffed with many Eritreans and non-Eritreans. That caught my attention. So I went and met some Eritreans with whom we became friends. In time I started to know more about Eritrea. My friends would invite me to join them in Eritrean National holidays to celebrate with them. And that is how I got to know Eritrea.

Ever since then I have been trying to find ways to actually come to Eritrea. A friend of mine introduced me to an Eritrean friend, Solomon. A few months ago I got a chance to come Eritrea and finally watch the countless birds of Eritrea.

I am also exceptionally proud of two young graduates who came around with me as we watched birds together. Fantastic young people, really. It is thanks to everyone involved that these past 11 days have been memorable.

I have been to almost every part of the country except for the islands. There is a great population of resident and migrant birds. I have been to Elabered. After Elabered we went to Keren, Agurdat in Gash Barka. Then we moved to Filfil and then we finished our tour in Massawa.

I found a new bird for Eritrea; it was n o t registered before. The Black Winged Pratinclle. It is commonly seen in Asia, but I found it here too. My experience here was not entirely unexpected but still very fascinating.

Our typical day would start at 6 in the morning because it gets hot at noon. We would watch birds until ten and then take a break. We’d go out again in the afternoon. You could do more in the highlands because it is a lot less hot outside.

In terms of birds, Eritrea is important. Breeding birds, residents and migrant birds are found here in big numbers!

Of course! I would love to bring some groups. It could be a good business of tourism for the country. But it is nice to start small. Bird watchers pay a lot. So commodities should be arranged. You would need trained professionals to guide tours.

There are some beautiful birds here, so it can be done, no problem. And most importantly the public needs to be aware of birds. I don’t think people here realize that you have so many beautiful and rare species. It is really important for local people to get involved and take care of the birds. It’s important for Eritreans to know about this rare wealth.

Involving the media would be great. The more there is about birds on TV the better. Well, here I don’t want to be misunderstood when I say that the birds need to be safeguarded. I have seen that the locals have no harmful practices against animals. Hunting is not a problem and I see no endangerment of birds.

So yes big potentials! I really hope for your country to be known for it. And I wish for Eritrea to be recognized and be part of international conventions and umbrella organizations for protection of wild life. Like the ICUN and Bird Life International, for example.

There is a lot of natural vividness that could be worked on. Eritrea is a small country. Did you know that you have some 600 species when in the whole of Europe there are about 800? … That’s is something that you should attach great importance to.

Every Day I am learning to swim in the vast oceans of brand new ideas. Editor,…