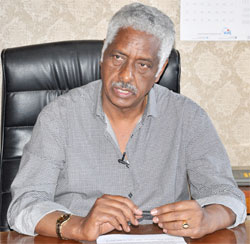 He explained that following the establishment of colleges in 2004 the number of students enrolled in higher education institutions has increased from 1,200 to 5,000 and that the total number of College students has risen from 5,000 to 14,000.

Indicating that diploma, first degree and maters as well as medical doctorate programs are being offered inside the country and abroad; Prof. Tadese explained that in the past nine years 500 citizens were provided with educational opportunity in Master’s degree and 60 in Doctorate.

He further pointed out that the fields of education introduced were aimed at supporting the nation’s development programs and that there exists strong cooperation with government institutions in evaluating the programs. He also stated that so far there exist 55  first degree, 55 diploma and 20 post-graduate programs.

Prof. Tadese expressed expectation that the citizens who benefited from higher educational opportunity would play due role in national development endeavors general and that of human resources in particular.