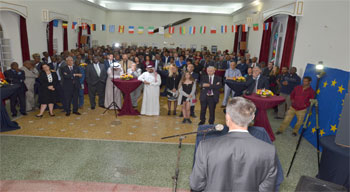 It’s Friday evening, a windy and chilly night is about to come and probably with some rain in parts of Asmara. The centre of the capital city becomes busy with residents enjoying the first hours of the weekend. Cafes, bars, restaurants fill up by the hour. The expat community, PFDJ officials, ministers, representatives of civil society groups, invited guests are also ready to enjoy the upcoming weekend by attending the celebration of Europe Day at Casa Degli Italiani.

The Head of the Delegation of the European Union in Eritrea, Ambassador Christian Manahl, accompanied by his peers, welcomes guests. Invitees take the time to greet each other, catch up and engage with one another. It is time to officially open the ceremony. People rushed to the beautiful hall of Casa, decorated with ancient Italian ornaments and some features of Italian colonization and the flags of Eritrea and the European Union (EU) standing tall on each side of the stage.

The event brought stakeholders under one roof and provided them with an occasion to discuss, share and engage with one another while enjoying the beautiful sound of Eritrean music at the hall. Ambassador Manahl, in his speech, highlights the importance of Europe Day and gave a glimpse to the current Eritrea-EU Cooperation.

Europe celebrated its 60th year anniversary since the signing of the 1957 Treaty of Rome on March 25th. Ambassador Manahl explained how a small organization of six member states grew through time and managed to bring European states together with the aim to forge harmony, peace, prosperity and security on the continent. The 28 members’ strong organization has allowed the EU to expand its work throughout the world and continues to be a “leading global trading partner”, the Ambassador adds. Currently, the EU has 139 delegations around the world and 30 operations while the union continues to be the biggest investor in development cooperation and humanitarian assistance.

Cooperation, as a key feature of the EU, as highlighted in the speech, reflects more than 20 years of EU-Eritrea partnership. As one of the first organizations to set foot in the

country in 1995, the Government of Eritrea and the EU instantly came into agreement to work in programs focusing on reconstruction, rehabilitation and manpower training under the 7th European Development Fund (EDF) known as the main EU catalyst for development cooperation with African, Caribbean and Pacific (ACP) countries (EU 2016). From the 10th EDF onwards, the focus shifted towards economic development rather than rehabilitation.

During the ceremony, Ambassador Manahl explained how the cooperation of mutual understanding and a spirit of partnership was made possible between the two entities. The signing of the 11th EDF in January 2016 was the outcome of efforts from both sides to come into agreement and designing the 2016-2020 National Indicative Development Program (NIDP). The signing of the 11th EDF made great echoes as the amount is worth 200 million Euros and the signing, without doubt, came in line with Eritrea’s specific needs and relevance.

On that account, as written in the 30th January 2016 edition of Eritrea Profile, the agreement concentrates mainly on energy for powering growth and in strengthening national institutions. With €175 million allocated to energy, the actual overview of activities and budget allocation bifurcates into two principle sectors: “energy for development” and “governance and public finance management”. €20 million or about 10% of the package will be earmarked for the following: “supporting and strengthening ministries and all regional administrations; establishing a clear, statistical and data-based system to assist with ongoing financial reform; economic planning designed intently to “encourage investment, create employment and reduce migration”. Whereas about 2.5 percent of funds, or €5 million, will be used towards a “technical cooperation facility” (M. Ghebremedhin 2016).

A year later, Ambassador Manahl takes the opportunity on Europe Day to update the audience on the current situation. In fact, the first part of the project that amounts to €90 million is now finalized and the implementation is keen to start in October this year. The main focus is renewable energy through energy support program nationwide. The rehabilitation of electric grid in Asmara is also on the agenda along with the support to improve the country’s power supply by assisting in managing the shift from solid biofuel energy towards renewable energy.

The cooperation also support capacity building in data management and statistics as well as financial management. The EU is also engaged in working with the Government of Eritrea on the United Nations Universal Periodic Review (UPR) recommendations. Partnering for development continues with discussions underway to rehabilitate the railway system in Eritrea as well as building new ones linking Eritrea to Sudan.

Europe Day provides also an opportunity to look at the current challenges and reflect on the future of EU and the world. As such, Ambassador Manahl stressed the actual challenges the EU is facing in terms of economic austerity in some member states, the issue of mass migration, the new security challenges and the rise of populous movements questioning European fundamental values while the world is facing environmental concerns and climate change.

Ambassador Manahl concludes by reminding participants that “security, peace and prosperity depend more than ever before on cooperation”.