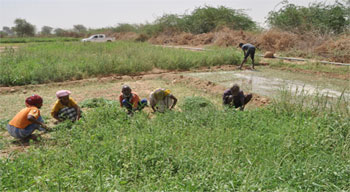 The critical need for increasing food production in developing countries like Eritrea is through modern technology. The government of Eritrea, in its Macro-Policy gave top priority: “the improved agricultural production through development of irrigated agriculture, and by enhancing productivity of peasants, pastoralists and agro- pastoralists”.

Agriculture is the mainstay of the Eritrean economy because the majority of its population is engaged in peasant farming, growing sorghum, barley, taff, maize, wheat, fruits and vegetables as food crops, while producing cotton, coffee, and oil seeds as industrial crops. Livestock development, dairy, meat and meat products, and sea fisheries also play significant roles in the economy. The agriculture sector therefore, is the prime mover in the economy.

Modern and commercial agriculture in Eritrea began with the advent of Italian colonialism in 1890. After independence, commercial farming is being practiced to meet the consumption demands of the urban population, to supply local industries with raw materials, and to generate foreign exchange reserves. There are few areas in Eritrea where modern agriculture is been practiced, they are: Aligidher, Hagas, Hamalmalo, Kerkeber, Gerset, Elabered etc.

As mentioned in the earlier part of the Gash effect, the majority of Eritreas are engaged in peasant farming, growing cereals such as maize, wheat, fruits and vegetables as food crops, and producing cotton, coffee, and oil seeds as industrial crops. Livestock products such as dairy, meat, and sea fisheries also play significant roles in the economy, eradicating poverty and most of all ensuing food security.

The current food security challenge in Eritrea consists of two dimensions: the first tries to maintain and increase Eritrea’s ability to meet its national food requirements, and the second seeks to eliminate inequalities and poverty amongst households. Food security is seen as a fundamental Right in Eritrea and guarantees its citizens the right to have access to sufficient food and water, and that the state must by legislation and other measures, within its available resources, avail to progressive realization of the right to sufficient food. As such, the Government of Eritrea since independence has been implementing agricultural projects over the three development regions, found in the nation mainly in the South West region of the country. The community integrated agricultural schemes that are underway under the National Crops and livestock corporation, ensures that food insecure groups in the country: gain access to agricultural productive resources; gain access to income and job opportunities to enhance their power to purchase food; are empowered to eat nutritious and safe food; have access to state provided relief measures that may be short to medium-term and on a sustained basis, depending on the nature of given interventions particularly where the group is unable to access sufficient food because of disability or extreme destitute conditions; and there is a continuous monitoring and evaluation of food security and nutrition status in the country.

Currently, two farming systems, the Integrated Farming Scheme (IFS) and the traditional farming practice, exist side by side. The IFS was started to develop semi-and commercial rain-fed agriculture, mainly in southern Gash-Barka, considered having the highest potential for the project. The aim of IFS is to increase crop production and incomes through the use of modern farming practices and larger land holdings. The government supports the IFS by granting land concessions and providing machinery and fertilizer at cost.

Broad-based agricultural development is a key for transformation in Eritrea. Due to the agricultural sector’s important role in the economy and for people’s incomes, accelerating agricultural growth is a must for reaching the government’s food security goals. Experiences from all successfully transforming countries suggest that agricultural growth must be broad-based. In reality, almost all staples are “self sufficient” products in the country, and hence their growth has to match with income growth for both rural and urban households.

Aligdher agro-industry project is one of the many agricultural sites found in the South-West development region. The Estate with encompasses three agricultural sites, of Aligidir, Tesenai, Enjihay; boosting the ability to produce crops such as – meshela, taff, maize; fruits like Lemon, Orange, Mango; Vegetables, Onion, Berbere, Pumpkins e.t.c

The Manager of the Agricultural Project, Mr. Dawit Abraha on his interview, pointed out that the crops are rain fed as well as cultivated through irrigation owing to the renovation of the water diversion canals constructed by the government. Additional he indicated that 2000 hectares of land have been cultivated this year only. Furthermore, he said that the Aligdir Micro Dam plays a pivotal role in storing water in the raining season and providing enough water to the agricultural sites found in the vicinity throughout the year.

Most of all though, the beneficiaries of the project in the area are the community farmers, the farmers are granted cultivable land through the raining season of summer and are able to produce crops, vegetables and fruits. The aim of the project is, in sustaining food production to improve the living conditions of rural communities by assisting especially small farmers in enhancing agricultural productivity and their incomes and to provide access to land and employment. The Tesenai, Enjihai, and Alighder agricultural sites respectively employ 150, 120 and 60 individuals, who work throughout the week. The Governments overall commitments towards the social upliftment of people in their communities by benefiting both farm and non-farm beneficiaries such as farm workers, household producers, food garden producers, rural and micro-entrepreneurs is massive. The Farmer Support Programme provides support to promote economic and market development to sustain adequate on-farm incomes which promotes stability, competitiveness, growth and transformation in the agricultural sector.

In terms of spatial patterns of crop production and input use, we find that, while some crops, such as Onion, Taff, Mashela, and lemon, have significant spatial patterns, some other crops, including maize, , tomato, Pumpkins, mango and animal food such as Alpha-Alpha, Columbus, Wurdi, Jira-Wira, and Cereals are grown by the three agriculture camps.

Taking a look at the current cultivated land in all camps, according to the managing director, the project currently boosts 16 hectares of Onions, 11 hectares of Berbere, 4 hectares of pumpkin and 8 hectares of taff.

In terms of input into the local market these agricultural camps this year alone were able to produce almost 2000 quintal of Onions, 70 quintal of berbere as well as Lemons, and oranges that were sent to Cities like Asmara, Dekemhare, Mendefera, Massawa and even Assab.

Most rural development programmes which aim to ensure income generation, implement important additional objectives specially the employments of extension agents and agricultural experts. This experts and extension agents help in explaining the inter-farm and inter-country differences in agricultural performance, along with the more conventional factors such as availabilities of land and water resources, inputs, credit, etc.

Thus for Eritrea’s Agricultural sector to have continuity and modernity in an ever changing world, the need to have competent experts in the field is a needed, more than any time in the past and as such the Ministry of Agriculture over the last quarter century of independence has been working tremendously to augment the ever growing Agricultural sector with certified Human capital. It is to be noted that the Ministry of Agriculture over the last quarter of century has given the appropriate need of trainings to its employees. In a factual manner, the Ministry has given short training courses to 17,658 personnel’s from the year 1992 to 2016. More so in the last 24 years the Ministry also had given trainings to almost 300,000 farmers, of which 110,000 were women.

In addition, Eritrea’s Hamelmalo College of Agriculture is one of the most vital and active contributors to this HRD. Accordingly, necessary reorientation and adjustments have been made to avoid duplication across faculties, not only the courses have been restructured but also the research programmes have been revamped and surplus staff redeployed to enhance efficiency of inputs and effectiveness of their output.

As a result of this investment in locally trained experts, Agricultural projects like Aligdher are primary beneficiaries. For instance this agricultural project within it encompasses experts in Veterinary science, Horticulturalists, Irrigation Engineers, Agronomists, e.t.c all trained and educated in the country’s colleges.

Current Project in the region include a banana plantation which will begin this year, the pilot project will start with the cultivation of William Bananas imported from Qatar. This sector will contribute in the alleviation of the problem of lack of production of banana and is hoped it will supply the Bannan and Tomato Factory found in the Alebu region. Furthermore the plantation will creat more job opportunities for farmers in the region.

In conclusion, the rehabilitation of the existing irrigation schemes and the construction of additional micro-dams in the region; the continued expansion of soil and water conservation programs to protect soil from degradation; use of fertilizers and crop rotation methods, adaptation of modern methods of production; the assistance of local farmers with modern machinery better quality seeds, chemical fertilizers and pesticides etc.; the harmonious integration of extension agents and experts with the local farmers are just a small portion of what has made the Aligdher Agro-project a success in the south-west development region.

Synopsis of the Archaeological Findings from the Greater Asmara Area