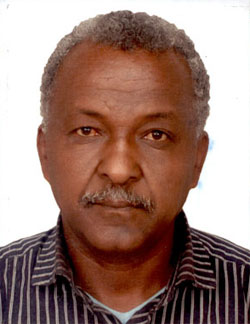 Thank you for having me, I am really grateful.

My name is Michael Berhe. I was born in Asmara in 1962. For a while I adopted reading as a hobby. I was actually reading a lot, so much so that it has influenced me to pursue writing as a career. I joined the armed struggle when I was a young boy. Soon, I joined the musical groups at the fields.

There are many books I liked. One is, Nseb Tiaklo Meriet (An Adequate Land for a Man). It is a book which has moved me.

Soon after independence, I was assigned to work as a reporter for Hadas Eritrea newspaper. I had an investigative column which raised numerous topics and ideas. It was a challenging column as some of the readers and individuals weren’t comfortable with the criticisms that the articles talked about. Then again, I worked for several years as news representative at the Northern Red-sea, for the radio, newspaper as well as TV. Besides this, I continued to write short stories and published books.

What I like about short stories is that you get to show your abilities of creating a full story with just few words. There, you need to have the right choice of words and characters to tell and create a great impression on the readers. It is a challenging section but I love it. A short story writer needs to have the ability to grab the readers’ mind eith the first paragraph and make a flow of the story till the end. That way, it is more enjoyable.

Yes. There are some fans that get mad at me for not finishing the stories in expected ways. I want my ending to be stronger than my introductions. I want to take my readers’ minds inside the story and make an impression of unforgettable short story.

First and foremost I am not from the high class people. That could be the reason. But mostly, I want to relate my stories and characters to reality. Most of the time, my stories originated from the past life I had at the field. The same goes with my characters. For example, for one of my books, Fetawi Seat (The watch lover), is someone who has great love for watches but couldn’t get one since he was a regular soldier. His dream to wear a watch was just a dream for him since only the administrators were allowed to wear one. After many years his dream was about to come true, as he was assigned to be a unit head, but unfortunately couldn’t find one. At the end, he was determined to get one after a battle from the enemies’ hands, but never made it alive. This character made a great impression on readers. He was unforgettable. So, to get back to the point, my characters are from real-life, easy to connect with the audience.

I have been able to get five books published. Each book has a collection of at least ten short stories. The first book I published was in 1991. A book I worked on with a collaboration of a friend Michael. Although the book had typing errors besides many problems, it had positive reactions response from readers. In addition, many of my short stories have been made in to documentary films and dramas. To mention a few, General Hussien, Island Aba Gubae that was based on true story, and recently Sire Haraj (a thrift trousers).

I do travel a lot, and that way I find interesting places and people. Island Aba Guba is a small island in Eritrea. What is interesting about this small island is that only one family resides there. They live a solitude life, which is far from the modern one. The father travels more than three days journey just to get a pure drinking water. What is amazing about them is, when they get sick, they light up a fire at the beach and leave sea products such as fish nails and corals. And the neighboring island residents come and leave a bag of medicines and some other products and take the sea products. It is an interesting life they lead there. That is why I wrote a story about them and it was made to be a documentary film.

They are right, it is. The cover is a man carrying a newborn donkey on his shoulders. Once again, I saw the old man on my way to the southern region, I just took the photo. I asked the man why he was carrying the donkey and he told me that his donkey gave birth on the way. He said that this donkey was going to serve him when it grew up but that day was his turn to do so. I found it interesting and felt like it expresses the story in my book. I believe that they are doing a great job. Most of them are college students and are busy with studies. However, they manage to bring great books to the reading society and I want to encourage them all to keep doing a good job. We have numerous great young writers. I think we should support them and lead them to the right directions.

I once again would like to thank you for inviting me on your page.

Synopsis of the Archaeological Findings from the Greater Asmara Area