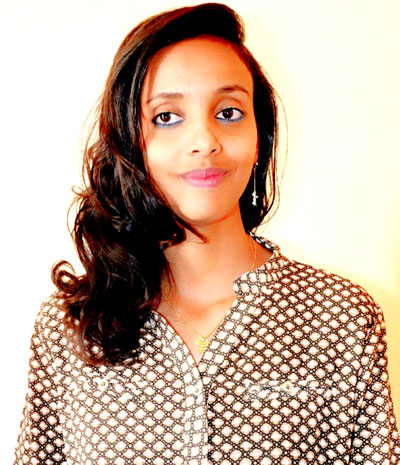 In few words this is how most of Eritrean youth should be defined: we are of progress not perfection. I am talking about fruitful young Eritreans in all walks of life and all professions. Eng. Saba Tekeste, at 26, is an example.
What are the topics that commonly pop out in your head? Let’s make the topics that you think of as a young Eritrean, which I am sure are also concerns of many young Eritreans, the focal points of our discussion on today’s Q&A page.

The top two would be education and professionalism, and, women’s rights.

Okay, good. So how about we start with Education and Professionalism. Eritrea is in fact one of the few African countries which invested tons in the provision of free education. Start with your personal educational endeavor and then we will discuss the subject matter.

Oh, so the others are not?

No. that is not what I am trying to imply. I dare to call it so because it is the second oldest profession after military engineering. After realizing the destruction their soldierly wit comported the first rehabilitation action human beings took was building houses, bridges, dams, schools, hospitals and more. So what I was trying to denote is the importance of civil engineering. Of course the other professions are equally important and all professions are related and also to some extent linked to humanity; but some are simply more linked. Saving lives and constructing social services plants for facilitating the life style and needs of human beings could be an example.

Many young people in Eritrea are educated and many more are extremely endowed with professional skills that might or might not have been acquired by necessarily sitting in class. The reality on the ground is of persistent youth that is always trying to learn and know more to eventually be multifaceted and poly-skilled. However, we do not publicize our knowledge nor our skills. We do not know each other. And what I thought the main hindrance for this was the lack of networking. A network for professionals and educated people whereby talents, projects, inclinations and more are exhibited for everyone to get to each other.

The idea popped out when I was in college and when I proposed it to friends it was eagerly welcomed, and so was MENTOR created.

It is an online monthly magazine. At first some friends and I created a group named ESS and we started by publishing senior year projects. It started small. We launched it in October 2016. And for three editions we posted it on our group’s page on Facebook. So it’s hard to say it was actually a publication, it was more of a group post. But when we realized more people were joining the Facebook group, we had to make it bigger and better. Hence we relied on NUEYS. So now, MENTOR functions under the umbrella of the National Union of Eritrean Youth and Students and has been published monthly since January.

The aim of MENTOR is to bring people together. Young professionals of all sorts to gather, know each other, connect and interact. In few words network. It has many columns with a range of variety. For people to just post and publish almost everything. It could be an idea, a project proposal, a work of art, a college senior project, journals or more.
The globally so called ‘millennial generations’ are known to be poly-skilled and lethargic due to the two faces of the era of technology: the good and the worst. That conviction being generally true, here in Eritrea, it is not entirely accurate. We simply are not exposed to the world yet. We hope for Mentor to bring about change. And so far so good, the number of youth interested is growing by the day.

Now, let’s move to the second topic. Here is your chance ‘oh you feminist’!

It is witty how you put it. There are so many aspects, perspectives and movements deriving from the term feminism. So it’s vast.

Yeah. And I always think that generally many of them have emotional connotations. Some sort of sad stories of revenge.

It could be. I don’t disagree. Speaking of our community; we have yes, overthrown countless of horrible traditions against women. Our freedom fighters-mothers have made that possible. But there is still discrimination against women. Not only in Eritrea but also around the world, and surprisingly enough, even in the countries of the First World; women have for example less salary than men.

Coming back to us, what we want in our country to prevail is a mindset change. Many young girls’ students and professionals, are proving themselves right by taking risks and standing against communal conventions against women. How the community looks at women must change; big things have been achieved but there are some things left. Something that looks at women’s rights as basic human rights. For the simple fact that when we say ‘girls’, we mean ‘women’, we mean ‘mothers’, we mean ‘families’, we mean ‘communities’, we mean ‘population’ and we mean the prosperity of human life!

Thank you so much Saba. Best of luck for you, MENTOR and human continuity ??

Best of luck to ERITREA PROFILE!