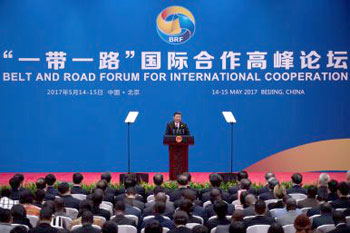 Eritrea has participated in the “One Belt One Road” initiative forum in the People’s Republic of China.

Asmara, 17 May 2017 – Eritrea has participated in “One Belt One Road” initiative forum in the People’s Republic of China.

29 Heads of State, 1500 representatives from130 countries as well as representatives of 70 international organizations attended the summit which mainly focused on interlinking countries around the world through viable infrastructure.

Reiterating that the PRC  would extend financial support and deploy construction experts, President Xi Jinping of the People’s Republic of China, called on other states to make due contribution towards the success of the project. In view of the fact that Eritrea is located in one of the world’s strategic maritime route in the Red Sea makes it an important partner.

Ever since the PRC leader announced “The Belt and Road” initiative in 2013, the project was expected to include 64 countries with a total population of 4.4 billion covering 1/3 of the world’s global wealth. According to the already mapped out plan, the project would be divided into two strategic roads and maritime routes that link Asia, Europe and Africa.

“One Belt One Road” project was initiated in a bid to create viable connection and cooperation among Asian, European and African countries, particularly in economic interaction and energy supply.