Pledge to reflect true image of their country 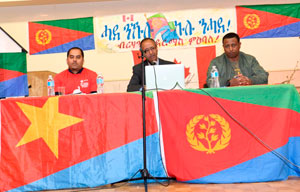 Eritrean nationals residing in Toronto, Canada, as well as in Kassel, Cologne and Northern Germany expressed resolve to enhance unity and reflect the true image of their country

Asmara, 18 May 2017- Eritrean nationals residing in Toronto, Canada, as well as in Kassel, Cologne and Northern Germany expressed resolve to enhance unity and reflect the true image of their country.

At a seminar the nationals held in Toronto on 14 May they explained that they will strengthen organizational capacity and unity and resolve to foil the external conspiracies against their country.

At the event, Journalist Elias Amare gave briefing on the huge sacrifice the Eritrean people have to pay for independence and national sovereignty as well as the commitment they are demonstrating to build a developed country.

The Chairman of the YPFDJ in Toronto, Mr. Fitsum Afwerki pointed out that the external conspiracies against Eritrea will not weaken the resolve of the Eritrean people and instead will

embolden their unity and determination.

In the same vein, Eritrean nationals residing in Northern Germany conducted seminar on 13 May in the city of Hanover.

At the seminar the nationals conducted extensive discussions as regards the significance of strengthening organization and timely information exchange as well as on the progress of the national development endeavors.

Eritrean nationals in Kassel and Cologne also conducted similar seminars aimed at strengthening organizational capacity and back up the national development programs.