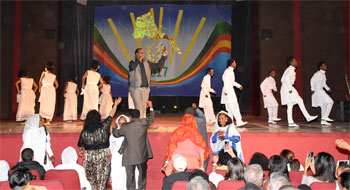 To walk in the streets peacefully and stay out as late as it can be, to remain at home and sleep well without any worries of what might happen during that night or the next morning was just a dream to Eritreans 26 years back. Freedom to the freedom fighters and the people of Eritrea was priceless. Every family shared same pain and memory, which is why now even a little kids know the value of freedom and the history behind it. May 24, is a huge day for Eritreans to remember, unite and celebrate.

Surely, these days are the busiest times of the month for the streets and cinemas of Asmara. Annually, different entertaining and historical programs are organized. This year, as usual, the streets have been vividly decorated and filled with people enjoying their independence along with families and friends for the past two weeks.

The history of Eritrea is uniquely addressed in many ways. However, the sacrifice people extended in the bid for independence and sovereignty is inimitably distinctive. In fact, the narrative is an Odyssey. One of the many instances was made into a documentary and presented in Cinema Roma on 19th May evening. The story told about forefathers of Eritrean armed struggle. It narrated about the early days in 1960s when fire for freedom was just starting thanks to the patriotism of several forefathers, one of whom, a legend Mr. Deglel Ibrahim Kulu: an early revolutionary from his young age who killed his own brother for a great cause. The brother with whom he’d spent his childhood. Also the brother who, when grown-up, sided with the Emperor. The documentary film showed the challenges Mr. Deglel had to face even after independence, facing family and friends.

Once more, the next days, the cinema was crowded as there was a program of music and dramas with melodies of the nine ethnic groups along with the mix of modern and traditional dancing crews. The audience could not just sit down and keep watching; they danced and applauded their emotions out throughout the songs. It was an event the audience enjoyed from start to the finish. It got even better when a duet of a father and son was sang: Tesfai Mehari aka Fihira, one of the most famous and loved artist of Eritrea, came out to the stage with his son born after independence. They blasted the stage with such an enthusiasm as they sang a song “Aleku” meaning “I am here”.

Moreover, one of the numerous dramas and comedies, a Tigre musical drama Meiras, was presented at the occasion- a true story drama of a village which was attacked in 1885 by enemies. The people were few in number but managed to unite and win a battle of a huge army. The drama reflected that everything can be achieved if people unite and work as one.

As an occasion of celebration and entertainment, it was also a comeback of an Eritrean star. Kahsai Berhe, an artist of a great fame and whose songs are cherished by many. The

artist came back for the celebration of the 26th national holiday, after many years of being away abroad. He presented a song titled “A’deyn adeyn” implied as “my country and mother”, which threw the crowed in excitement.

Furthermore, part of the events that has taken place on the Harnet Ave. are the Japanese SEISA drum group. They go by the name Dako-on. The group has been preforming at cinemas and streets of Asmara, grabbing the attention of everyone since the first drum hit. The group was first formed in 1993 and developed to be a non-profit organization which aims to improve the ability of youth through education and sports and also help them understand the value of the Japanize culture. Again in 2006, the group was able to come up with a cultural drum group which is now the number one drum group in Japan. They showcase over 140 concerts per year. They are the champions of numerous competitions. Despite travelling to many countries to perform, it is their first time here in Eritrea. The Dako-on brought out pamphlets written in Tigrigna so the Eritreans would know about their dreams and goals. Members of the group are of college level and university students. During an interview with the members, they told us that even though it is their first time in Eritrea, they felt like at home. They added that they enjoyed the weather and the hospitality of the people. At last they expressed their gladness in the fact that both of the cultures have several similarities. They furthermore recommended for more programs to enable the people of Eritrea and Japan exchange cultural legacies.

On the other hand, the Chinese Confucius Institutionin Asmara has displayed a mesmerizing show on the same street. The institution teaches Chinese languages, culture and sports. What makes this program unique and special is that it was prepared and performed by Eritrean students. The aim of the institution is to help exchange of the diverse cultures of the countries come to reality. The students displayed songs, dramas, and poems in Chinese language along with traditional wears and dances.

The independence programs have continued since the 8th of May with different schools organizing events at schools. Sport events, children programs, karaoke, art exhibitions, magic shows, concerts, are few of the events that have taken place.

It is time to celebrate the difference, the variety of the cultures. This is what the Eritreans live to enjoy, what makes them unite, and they bring out their best in doing so, in May.

May is the month they go out and stay out on the streets with the different activities, kids holding their toys and balloons listening to songs, elders standing to watch the drams that reflect the past, which takes them way back. Happy holidays to Eritreans, Happy birthday Eritrea.