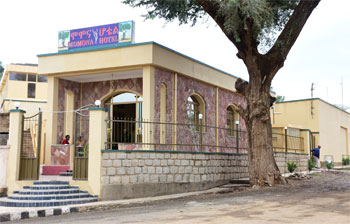 This past week I made a trip to the Zoba Debub region and my first stop was Mendefera, the capital of the region. With its brand new regional referral hospital, its landscape and farms. Its climate is appreciated and I was lucky to be welcomed by the rain.

This town is a point of transit between southern cities of Adi Quala, Areza and others to Asmara. As I arrived in the city, I noticed this new hotel which had opened just a week before my visit. The hotel’s owner is still making the latest arrangements and adapting to the new responsibility. I congratulated him and asked him a few questions.

Many people of Mendefera are members of farming communities and depend heavily on agricultural income-generating activities. Many travelers also stop by the city to have a drink or meal before continuing their journey. Youngsters living in surrounding villages also come for macchiato or a change of scenery while others would come to the market to buy fresh fruits and vegetables from farmers.

Thus, Mendefera remains a place to visit and a place to stop by, and the Hotel Momona is a “must visit” place. Its owners, Mr. Araya Gebreab and his late brother, Mr. Habte Gebreab, abandoned their career as pharmacists to embark onto a new adventure – a hotel business. “We always wanted to do something for the place to where we come from”. Clearly the emotional attachment was the driving force. Both brothers were born and raised in Mendefera.

As the initial idea was taken by the late Habte Gebreab, his brother Araya had to multiply efforts on his own for the last two years before opening his business. A difficult time but at the same time motivational for the name of his late brother. After eight grueling years and 10 million Nakfa worth of investment, Hotel Momona finally became reality at the beginning of May.

Besides its location right at the centre of Mendefera, the refreshing atmosphere and friendly staff are clearly the strength of this new hotel. The manager and owner is still settling down to his new profession. The hotel serves a variety of dishes and its open space at the back is already charming young couples and groups of young people chitchatting around.

“When my brother and I decided to open up a hotel in our hometown, it was an adventure and our aim was to provide good service to the local inhabitants and tourists”, Mr. Araya said.

With about 22 employees, Mr. Araya’s goal is also to boost employment by recruiting local staff. As the procedure dictates, a week after the official opening, representatives of the Ministry of Tourism came to assess the new hotel as well as provide information and advice on best practice. After the meeting, the owner is planning to expand his place by adding a conference hall and perhaps more.

In terms of tourism, investing in areas outside of Asmara is a strategically well-thought idea especially in areas such as Mendefera where many dwellers will transit. “I am thinking on the long-run, when our economy will be better. Zoba Debub could be a great tourist destination for those green lovers”, Mr. Araya added. From his words, Zoba Debub, a region commonly known for its green areas, agriculture and farming, water dams and check dams such as Gergera and Adi Halo; Mendefera is located right at the centre point linking the capital city with the rest of the region.

After spending a night at the new hotel and experience its quality service, clean environment and fair price, I am sure future visitors will find it attractive. Hotel Momona provides a much needed weekend break especially for those who would like to unwind after a busy week in Asmara.