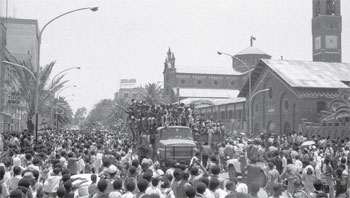 As individuals we seek freedom and privacy, because that is what we need to exercise our wishes. It has never been replaceable. By the same token, groups, communities and societies always demand liberty. That is why societies all over the world fight many battles not just to survive but to lay a peaceful foundation for the generations that succeed them and keep the nation’s independence.

Liberty, in a broad sense, means tranquility and freedom where people enjoy every part of their living and time. That may be the reason for many countries in the world celebrate Independence Day in a very colorful and respectful manner that appreciates the patriotism of the past with its huge contribution to the present day.

Celebrations of Independence days can be of different events, covering the history the country observed as a base. Eritrean’s Independence Day celebrations include carnivals, local and other nationals’ cultural shows, public get-togethers, freedom fighters’ commemorations through art and literature as well as sport activities all over the nation.

As history puts it, the road to African independence was very hard and tortuous often through bloody fights. Most African countries (17) gained their independence in the 60’s except few, but the struggle for Eritrea’s independence started at this period. Eritreans in these days needed to feel they belong to their home-land, however, being under colonialism, they couldn’t resist it. As other African nations were celebrating their independence triumphs over Europeans, the first bullet of armed struggle was fired by Hamid Idris Awate from the mountains of Adal, in September 1, 1961.

“In an attempt to suppress the Eritrean revolution, both the regimes of Emperor Haile Selassie and Mengistu Haile Mariam did not differentiate between military and civilian targets. By applying this strategy, the successive Ethiopian regimes committed gross violations of human rights during the course of the war” (Amina, July 2001). The aftermath of these violations fueled the armed struggle and it grew super in towns and the battle fields. People along with their freedom fighters had an immense role in taking the war into its last limit and eventually won Independence Day.

So many lives had been sacrificed in the three decade war and eventually Eritreans stepped into this particular and significant day, May 24. Independence days are now celebrated as national holidays in most countries of Africa and other continents.

When freedom fighters entered the liberated towns being in the Tanks and Lorries, one above the other, their over-joy showed what the day meant and how much they have been waiting for it. The flag of the enemy was replaced with the Eritrean flag waving in the skies. Mothers waving their Awlie (olive leaves) here and there felt extremely sensational to finally see a liberated nation after a long thirty years of battle.

The meaning of Liberation is something intangible, nonetheless is a very delighting moment for Eritreans living inside and outside the country. Hence, every year the liberation day is celebrated in spectacular and memorable fashion, a tribute to the gallant martyrs.

The participation and dedication of every citizen in making this day as shining as ever can be easily noted. Independence for Eritreans is a remarkable day of joy, peace, calmness, a stepping stone for future national development. Surely, this year’s theme of Independence Day, Laying Pillars for Vibrant Growth, highlights the nation is steadily growing and is on a promising avenue.

As a newly independent nation, Eritrea is employing its national efforts in various development plans and create partnerships with many countries. Establishing partnership with countries is not limited to the mutual economic benefit rather it also looks for creating societal interaction among the various societies and sharing the indigenous cultures that are out there.

At Independence Day celebrations, not only citizens but also foreigners from across the world share their cultures and be part of the stunning moments of celebrations. This strengthen the bond that is initially built between the partner countries in diplomacy, culture, politics and, most importantly, both societies get clear image of what each country is all about. To mention some, in the beginning days of the 26th Independence day celebration I witnessed the Dako-on, the renowned Japanese Drum Team performing a breath-taking drum show that reflected the Japanese culture and customs in the Asmara Theatre.

Such endeavors and partnerships are mutually benefiting the people of the two countries through diplomacy and cultural interchanges. These in general shows that Eritrea as a nation, no matter what the occasion, always strives for mutual benefit.

Independence Day celebrations clearly reflect how big Liberation is for any nation and, particularly, for Eritreans. The celebrations in the last few days have been appealing, making people get out of their houses just to enjoy the essence of Liberty in the streets. The taste of liberty is found where people walk down the city enjoying the fresh and calm air. Overall, its implication is comprehensive, as it honors nation’s privacy, people always appreciate as they perform anything on anytime