Live streaming on the streets of Asmara 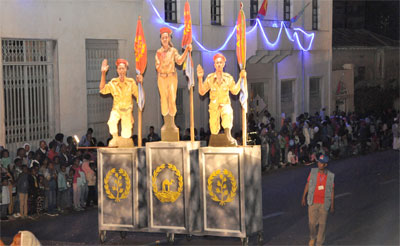 How many carnivals are there in the world? Plenty. So many in fact that carnivals have become a number one touristic attraction, a ‘got to do at least ones in a life time’ activities and just gatherings that bring together people from all walks of lives in one venue, as simply as, to rejoice.

Colored faces, crazy lighting systems, lively music, accessories in the air, vivacity and, don’t call me audacious, but I believe that carnivals in nowadays definition are the ultimate expressions of humanity.

Let’s take some of the biggest examples. There is the Carnival of Rio de Janeiro in Brazil where an estimated 2 million people rally in the venues of Rio twisting their legs to Samba rhythms; the festival goes on for 4 days. In London, UK, 1 million people gather annually in August for the Notting Hill Carnival. In India, during the Goa Intruz Carnival 100000 flowers are thrown in the air! And… e viva for the Carnevale di Venezia. Probably the longest carnival in Italy and maybe even the world. The Carnevale di Venezia stays for a lengthy time of good 20 long days. It includes a masquerade affair and several centuries old refined Italian traditions and customs; you’d better watch out for Arlecchino!

And here at home, we do have several carnivals. The biggest Eritrean carnival, differently and uniquely from the rest of the world’s, is of deep significance. Yes, it does include the dancing and the lighting; however, it also encompasses meaningful connotations.

The biggest carnival in Eritrea is the annual independence Carnival. It gets prepared in connection to the Independence Day anniversary in May. Although it is a one day, one evening event, it surely is highly expected and beautifully conducted every time.

How is it different from other festivals? Well, for starters if it is scheduled in the month of May, then it is obvious that the Carnival’s theme is more of ‘free people, free country’ kind of thing. And the interpretation of freedom in Eritrea is bottomless and profound. Hence, the carnival almost always evolves in such essences: freedom to be free, freedom to be culturally beautiful, diverse and united, and freedom to build the nation. Just free, free and free.

Several organizations, administrations, neighborhoods, PLCs, schools and unions take part in the carnival. They each prepare their best definitions of freedom. They normally depict it in artistic ways. It may be through paintings, musical performances, comedy, mobile theatrical recitals, dances and many more ways.

Normally big, well more correctly, very long trucks serve as the medium of the parade. After the organizations, administrations, neighborhoods, PLCs, schools and unions finally finish the months’ long preparations and mount their arrangement on these long, long decorated trucks they line up in one extended line, and all together, one after another start to slowly dash through the avenues of Asmara.

It is such an incredibly beautiful scene that nobody wants to miss out. And, yes of course, the independence week is astoundingly celebrated by nationals. So the crowds out in the street every evening for multiple days is massive. Nevertheless, comparatively, the crowd for the carnival is a lot bigger. On the day of the carnival all the venues, especially those around the center of Asmara, are reserved and closed for it, and therefore, this is how one perceives its worth. I think that people are especially fond of it because in its massiveness it brings many people together. I mean, it includes so many activities and exhibitions that to the minimum you’ll find at least one that interests you most. And maybe two, three, more or even all of them! Stay for the Carnival, and in a length of a couple of hours, you’ll get all the basic info on the Eritrean people, its culture, history and tradition.

It is actually quite daring to be explaining it in few words and in one page of the newspaper. The people’s emotions, life style, history, current endeavors and more are the main constituents of the carnival. In few words, a live streaming of what Eritreans are all about.

Let me now take you back to 2016, the Silver Jubilee of Eritrea’s Independence. The carnival was, of course, amazing but one wagon shined the most. It depicted the first day Eritrea ever became free. The very first May 24 in 1991! A community of one administration literally served as a time machine that zoomed us back to 1991. They all wore humble and gloomy outfits typical of those days and performed astonishingly how the people of Asmara enthusiastically welcomed the freedom fighters. It was so real, so believable that it brought tears to many.

By the way, I should mention this in case you don’t know or maybe you know but it’s been so long since then. When the freedom fighters first set foot on Asmara on a happy Friday of May 1991, people literally run out to the streets like fools. They were overjoyed, so much so, that they cried like little babies. They spent days out on the streets without bothering to close the doors of their houses welcoming every freedom fighter. I hear my aunt ran to the streets wrapped in her shower towel. That was how much it meant and still means that Holy Friday of May 1991. They kissed them and kissed them again. They hugged them and hugged them tighter. They lifted them on their shoulders and even higher. They run after them and followed them longer. They welcomed them with gratefulness; a thankfulness expressed in loud cheers and delighted welcome back home folk-songs invented on the spot.

Fast-forward to 2017 and everybody still dearly feels exactly the same. And since the carnival is prepared by the people for the people, it is a bit more emotional and expressive.
This year’s carnival was held on Monday the 22nd of May. A brilliant idea was topped to the ordinary making of it. This time there was a whole subtext to it based on the calendar: the Eritrean calendar. What I mean is, that the parade was divided in the 12 months of the year, according to the National events that took place in each of them.

The sub division of the month of June had sections depicting the altruistic heroism and martyrdom of Eritreans, both for the Nation’s independence and its sovereignty. That was in connection with the 20 June Martyr’s Day. The July section adorably depicted the very first round to Sawa. And just wow and wow again. Young boys and girls acted it so realistically taking the crowd back to 1994 when Sawa welcomed its first children. The show believably portrayed the youthful enthusiasm of the youth of 94. 23 years later, now, Sawa is home to youngsters of the 30th round!

The wagon of December showed the Algiers Peace Agreement. The launching of Dimtsi Hafash in 1979 was illustrated in the section of January. March gave a picture of the liberation of Nakfa, the demise of Nadew Iz and Women’s International Day. The wagon of April, on the other hand, brought to life the bloody massacres of Hirgigo, the Black Friday, that of Wekidiba in the villages’ church yard and painful memories of many years that took place in April.

Moreover, every wagon depicted the traditional life style and beautiful dances and costumes of each ethnic group.

The parade was definitely historic and very significant in terms of depicting the diversity and unity of the Eritrean people. The young and old joined hands in making this year’s carnival once more better and higher. Shout out to every single one that was there, job well done! Cheers for Independence!