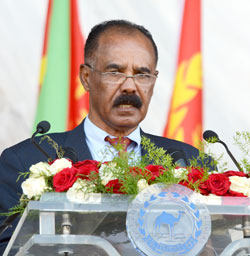 Congratulations to the people of Eritrea inside the country and abroad.  Words of gratitude to those who have organized and embellished the celebrations of Independence Day.

Congratulations to the people of Eritrea inside the country and abroad.  Words of gratitude to those who have organized and embellished the celebrations of Independence Day.

The current year is the first year of the second quarter century of our independence.  It is occurring at a juncture of a quarter of a century that has elapsed in numerical terms and in which important changes and transitions are unfolding in global and regional developments.

Eritrea’s independence and sovereignty have special attributes in comparison to other analogous cases.   In the first place, the people of Eritrea were entitled to, and should have been allowed as, or more so, than other peoples in Africa, to exercise their inalienable right of national self-determination.  But the powers that emerged victorious in the Second World War unfairly decided to suppress these inviolable rights and subdue the Eritrean people through brute force.  In the event, the people of Eritrea had to wage, without any external succor, an arduous struggle and vanquish the biggest army in Sub-Saharan Africa that was alternatingly supported by the two super-powers.   Their military victory notwithstanding, the people of Eritrea chose to respect the rule of law and assert their inalienable national right, which is solemnly enshrined in international law, through a referendum.

But the Eritrean people’s spectacular achievement of liberation and sovereignty did not come to an end in 1991.  They have also foiled, in the past years, subsequent machinations of the forces of domination that subscribe to the rule of the jungle.  As it happened, the people of Eritrea have challenged, both through defensive force and legal means, the litany of putative border disputes – from Hanish to Badme and Dumiera – that were willfully concocted to deny the Eritrean people time and space to rebuild their nation devastated in the long protracted war of liberation they had fomented.   Unfortunately, these forces have not accepted their failures.  Instead, they seem bent on inflicting yet more harm to the

people of Eritrea by fomenting interminable crises.  To this end, they continue to flout the rule of law and to occupy and inculcate unwarranted damage in sovereign Eritrean territories.

To cover up their incessant failures, these same forces continue to dwell on mendacious smear campaigns against Eritrea.  Eritrea’s impeccable fight against terrorism – that spans the period prior to independence to the time when Bin Laden was in the Sudan in 1996 and thereafter –  has thus been sullied and distorted so as to rationalize spurious accusations and  to impose unfair sanctions against the country in 2009 by the UN Security Council.  Apparently, this charade has not mollified their appetite and they have subsequently resorted to demonization and farcical campaigns falsely accusing Eritrea of “human rights” violations.

Indeed, the various malicious schemes they have unleashed in the past years are too appalling to comprehend and rationalize.  These include: subtle subterfuges woven to destroy Eritrea’s economy; transparent campaigns waged to bring about diplomatic “isolation” of Eritrea; incessant psychological and propaganda wars peddled day in and day out; and the open military assault that was launched in Tsorona last year.

How about the people and Government of Eritrea?  They have vanquished all machinations and subversions.  They have managed to safeguard their sovereignty and independence.  They have scaled numerous obstacles and hurdles.  They have consolidated their national unity and cohesion.  They have overcome formidable economic challenges – both natural and those created by the machinations of Eritrea’s arch-enemies.  They have registered spectacular achievements in a quarter century without flinching or capitulation.  They have imbued greater radiance to the independence they achieved in 1991 and they are now poised to embark on a new chapter of development.

And the forces of arrogance, domination and their minions?… The various machinations and subversive plots they have woven have failed inexorably exacerbating their frustration and anxiety.

Eritrea’s independence in 1991 coincided with the end of the Cold War and the advent of chaotic upheavals associated with a unipolar global order.  The second quarter century

that we embarked on last year symbolizes the last phase of the global crises spurred by misguided policies in a unipolar international order.     Although it is difficult to predict now where and how long the transition will take, it is imperative to seriously assess its contours and possible trajectories in view of the upheavals that continue to rage in our region and the world at large.

In the event, we must build on the national progress achieved so far and continue our struggle, taking into account all scenarios of international and regional changes, for a more robust, comprehensive and sustainable development with greater pace and more refined strategy.  This is not a matter of choice but our historical obligation.  I have no doubts whatsoever that the people of Eritrea – both inside the country and abroad – will emerge triumphant in the expansive undertaking that they have embarked upon.

On this occasion, I urge the UN Security Council to respect the rule of law, for its members to shoulder their responsibilities and to ensure eviction of occupation from our sovereign territories.  I further urge the UNSC to rescind the unjust “sanctions” imposed on Eritrea and to redress the damage that this has inculcated.  I also appeal to the friends of Eritrea who stand for justice to further strengthen their solidarity.

Best wishes for good Kremti (main) rains!
Glory to our Martyrs!
Glory to the indomitable Eritrean people!
Victory to the Masses!

Adulis: The Ancient Port-City of Eritrea Part I