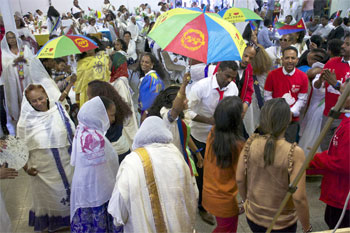 Eritrean communities in Italy, Norway, Kuwait and Kenya have celebrated the 26 Independence Day Anniversary with a patriotic zeal.

Asmara, 25 May 2017- Eritrean communities in Italy, Norway, Kuwait and Kenya have celebrated the 26 Independence Day Anniversary with a patriotic zeal.

Pointing out that the Government and people of Eritrea have demonstrated strong perseverance to safeguard national sovereignty and to build a prosperous nation, Mr. Russom Ghebreyesus, Head of Consular Affairs at the Eritrean Embassy in Italy, said that commendable efforts have been exerted to  promote national identity, empower culture of work and productivity.

The Eritrean nationals residing in Bergen, Norway also celebrated the 26th Independence Day with different activities. The nationals expressed resole to transfer the noble national and societal values to their children.

Similarly, Eritreans in Kuwait have colorfully celebrated the 26th Independence Day anniversary.  Mr. Idris Mohammed Ali, Charge d’Affairs at the Eritrean Embassy in Kuwait, said that the national celebration are indicatives of the respect the Eritrean people have to the fallen heroes and platform in which they renew their pledge to build a develop nation.

Eritreans in Kenya on their part celebrated Independence Day with a patriotic zeal. Mr. Beyene Russom, Ambassador of Eritrea to Kenya and Tanzania, said that Eritrea’s peace and stability is the result of the strong harmony, mutual respect and commitment of the Eritrean people. “If such values are carefully nurtured they will have strong impact in the efforts being conducted to build economically developed country and thereby to ensure economic emancipation”, Ambassador Russom added.