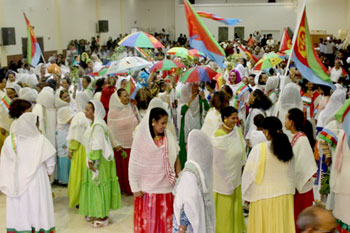 Eritrean communities in Jeddah, Riyadh and Dammam, Kingdom of Saudi Arabia, and New Orleans, the US have celebrated the 26 Independence Day Anniversary with enthusiasm.

Asmara, 26 May 2017- Eritrean communities in Jeddah, Riyadh and Dammam, Kingdom of Saudi Arabia, and New Orleans, the US have celebrated the 26 Independence Day Anniversary with enthusiasm.

The Independence Day celebrations in Jeddah was featured with sports and cultural activities as well as with programs presented by students from the Eritrean International School.

Mr. Saleh Mahmud, head of Public and Community Affairs at the Eritrean Embassy, said that the people of Eritrea have come out victorious against the different external conspiracies and that the

Independence Day celebration will further consolidate to unity and resolve of the Eritrean people.

At the celebration in Riyadh, Ms. Weini Gerezgiher, said that Eritrea’s peace and stability is the result of the strong harmony, mutual respect and commitment of the Eritrean people.

Reports indicate that Eritreans and friends of Eritrea residing in Montreal, Canada have celebrated the 26th independence anniversary through staging various cultural and sports programs.

Likewise, Eritrean nationals in New Orleans celebrated the 26th Independence Day with different activities including cultural and artistic performances. The Eritrean flag was also hosted at the building of the city Municipality.