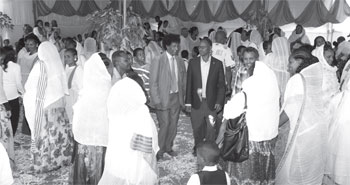 Coming together to set up a place and preparing feasts to celebrate their victory is a dear culture of the Eritrean society. On this specific day of grand victory, the Eritrean people celebrate with passion. Regardless of religion and ethnic differences communities gather in the neighborhood to celebrate this important day.

The Independence celebrations have become a corner stone of Eritrean cultural values.

Comawi Das, communal gathering, is the main way of celebrating the day with in different parts of subzones in each region of Eritrea. The ultimate goal of communal gatherings is to reflect on the common struggle for independence and to renew the resolve to protect the sovereignty of the nation. At the same time, being together gives the people a sense of ownership of their history.

National holidays in Eritrea are meant for Eritrean people to strengthen their solidarity. Hence, a communal gathering is a wonderful moment and a heart touching gathering which is hard to explain in simple words. Everybody rejoicing together and cutting cakes for Eritrea’s Independence.

It is also a juncture in which values and history are handed down to the youngsters. I saw freedom fighters sharing their experiences of the armed struggle.

Though every administration has its own beautifully decorated, amazing, outstanding and splendid communal gathering, I chose to focus on few to serve as an example. I went to Abashawl administration, Arba’ete Asmara administration and Akrya administration. And I can proudly say that my visit was wonderful.

In her speech, Ms. Asgedet Luel, administrator of Hadsh Adi and also a member of the organizing committee in Abashawl administration, congratulated the Eritrean people inside the country and abroad and, especially, members of the Eritrean Defense Force, who are dearly preserving Eritrean sovereignty. She continued to say that the Eritrean Independence Day is precious and valuable, and the liberty was achieved through heavy sacrifice. Ms. Asgedet additionally said “good is yet to come” as the last 26 years of independence were years of development that have led us to the beginning of a new stable era.

“Getting freedom means building long lasting peace as an inheritance to the masses”, Ms. Asgedet said and added that Eritrean people, especially those involved in the Nation Building Process, are to be thanked for preserving Eritrean sovereignty while foiling external conspiracies. “Eritrean youth have worked hard and toiled even harder by the day” said the administrator thanking the young generations for developing their nation. She highlighted also the country’s achievements especially in the sectors of communication, transportation services, foreign investments, mining and tourism.

Similarly, Mr. Rusom kbri (wedi kbri), present at the occasion to celebrate in the Arba’ete Asmara’s communal gathering, explained that such occasions are not conducted to dance or have fun but to show how much Eritrean Independence means. He also added, that communal gatherings are basically a way of passing down the value of unity to young generations.

Akriya is famous for the big number of its inhabitants. Muslims and Christians live peacefully in a rather small neighborhood. Their cohesion was wonderful as always.

Mr. Beshir Salh from Akrya administration, explained that he was happy to be celebrating the day of independence with his fathers and mothers in the communal gatherings showered with love and respect to one another. He also said he has been enjoying the warmth of communal gathering. He said he was able to understand the true meaning of independence and that youngsters like him can learn about the struggle for Independence, sovereignty and development.

Ms. Senayt kfle from Akrya administration said: “Even though there are some kinds of malign maneuvers towards Eritrea it is not formidable to the Eritrean population as they have had so many worst instances, hence, to develop a peaceful Eritrea we have all dreamt of for long will be easy.

Teacher Abdelwas’e Abday from Akrya administration, on his side, said: “in today’s world where people are fighting caused by ethnic and religious differences, Eritrea is an exception. People of Different ethnicity and religion celebrate together. This is basically an Eritrean way of living which existed in the past and still exists. Eritrea has been free for 26 years against long and evil conspiracies. And now the youngsters are very well aware of their identity and proud of it.”

The Eritrean struggle for independence was conducted with limited weapons, great self-reliance and major belief, trust and unity amongst its people. And after independence, the young generation is working hard to develop Eritrea to become a great, developed and respected African country. Eritrea is dearly treasured in the hearts of the young and old, and so shall it perpetually be!

Eritrea at 26, Even the Little Rock Matters