Eritrea at 26, Even the Little Rock Matters 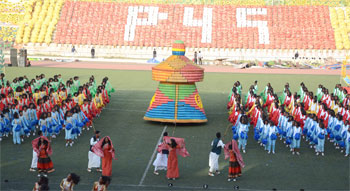 This past Wednesday between a mix of a chilly wind and sun, Asmara, the capital city, was getting ready for its official ceremony of Eritrea’s independence. As tradition dictates, the 24th of May marks the closing of festivity after a night on Independence Avenue marked by the customary fireworks at midnight. After a night out for the pleasure of bar and club owners, the sound of the artillery awoke people as a symbolic of 24th of May.

Flags were waving on the streets, each neighborhood celebrated through music and dance at community tents and families gathered together in the morning hours for the coffee ceremony and a breakfast taking a couple of hours watching EriTV. Later on, after taking a nap and resting from a night out, it is time for the official ceremony at the Asmara Stadium.

In the afternoon, ladies and gentlemen wearing their best outfits were rushing to get at the Stadium on time. Guests showed their invitation card at the entrance to youth volunteers of the National Union of Eritrean Youth and Students (NUEYS) wearing their blue uniform and handing over the program of the ceremony and the Eritrean flag while showing direction and helping the elders and the disabled.

Elder women were already dancing to the sound of music played while the organizing committee was making last minute arrangements. Protocol was welcoming ministers, PFDJ officials, Eritrean diplomats, resident ambassadors and representatives of UN agencies and the EU.

The marching band was getting ready at the back and at 4:30pm, right on time, the ceremony began. Already the ‘elelelel’ by women echoed and flags were raised high by the audience while the marching band concluded with the official salute to the President of the State of Eritrea, H.E. Isaias Afwerki. After a minute of silence in memory of Eritrean fallen heroes a welcome speech was made by the Commissioner of Sport and Culture, Ambassador Zemede Tekle. The Ambassador expressed his gratitude towards the National Holidays Coordinating Committee for the preparation of the weeklong celebrations taking place nationwide and stressed the importance of synergy among all stakeholders in making this year’s celebrations a success.

Following his words, President Isaias Afwerki gave a keynote speech to the attentive crowd. After welcoming guests and congratulating the people of Eritrea in the country and abroad, he mentioned how Independence Day is the time to reflect on the way forward and how the existence of the nation is always challenged as it “coincided with the end of the Cold War and the advent of chaotic upheavals associated with a unipolar global order”. He also stressed how Eritrea, compared to other African countries, had to fight for its right to self-determination. He mentioned that Eritrea faced several challenges but continues to overcome them despite the repeated attempts to challenge the country’s existence including through border disputes in Hanish, Dumera and Badme. In his speech, the President also highlighted the resilience of the people and called upon the strong mobilization of Eritrean people, the diplomatic efforts, the financial contribution and mobilization in the diaspora to support their nation financially and acting as informal ambassadors.

Importantly, he stressed how Eritrea is now engaged in a new phase of development and how the attempts from the outside continue to be a failure. In fact, Eritrea is now engaged in its second quarter of century since last year which “symbolizes the last phase of the global crises spurred by misguided policies in a unipolar international order. Although it is difficult to predict now where and how long the transition will take, it is imperative to seriously assess its contours and possible trajectories in view of the upheavals that continue to rage in our region and the world at large. In the event, we must build on the national progress achieved so far and continue our struggle, taking into account all scenarios of international and regional changes, for a more robust, comprehensive and sustainable development with greater pace and more refined strategy”, the President said.

After wishing for the best rainy season to come, the ceremony continued with the military parade representing all the Eritrean armed forces, accompanied by instrumental music of the renowned song “tsnatna iyu natsenetna” translated as “our steadfastness is our independence”. The singer, Semhar Yohannes, sang for the first time at the stadium “kem qedemki” or “as you have always been” a tribute to Eritrea and how the history of yesterday shall be remembered today.

Simultaneously, air force planes were parading and youngsters were preparing the stage of the next musical performance entitled “kbrti emni”, the symbolic rock. Through human made rocks and wood, the musical told the story of Eritrea’s struggle to break free from the chains of colonization and domination. Beautifully represented through music and dance, actors were trying to break those chains followed by the arrival of freedom fighters and Hafash Wudubat (clandestine EPLF mass organizations) in trying to deliver the mountains of rocks symbolically representing Eritrea. The audience was completely immersed in this show comprised of songs in Afar, Hedareb and Tigrigna. Slowly the rocks were transformed into green and the human made camels marching while pillars of development were laid as the theme of the year: “Laying Pillars for Vibrant Growth”. The marine resources, the sea, the graduates, the farmers were all represented as actors of those pillars for growth. Throughout this long musical drama, the stones were a representation of the land and how Eritrea finally made it through. Literally, it depicted Eritrea’s determination and how even the smallest rock matters for Eritrea to completely deliver itself from the chains of colonization and occupation.

The show continued representing progress and challenges with the border war, the sanctions and unrelenting people’s resilience. Songs continued with Nahom Yohannes singing “Ynges zegelgele” translated as those who serve rule” in tribute to the people since the 1960s until today defending the country and serving their country in all forms. While mosob, symbol of the collective stood tall in the middle of the stadium.

The wonderful first part was followed by the contribution of about 2,300 youngsters from secondary schools in the Central region under the theme of “our colors”. Some were in front of the crowd holding banners of colorful flowers highlighting the stadium while words were created such as our colors, agriculture, mekete, our flag, independence, while wearing the colors of the flag, other young dancers moved in unison. A wonderful representation of how the basic foundation or pillars are vital for vibrant growth. Songs continued in chorus under the theme of colors and a special unique one spelled out with its reggae beats.

From the speech of President Isaias Afwerki and the symbols throughout the ceremony combined with the year’s theme of building pillars for growth; a new phase of Eritrea and focusing on mekete showed Eritrea’s willingness to engage further in promoting the nation’s image and boost its economy in the future. As a final, the esteemed singer, Helen Meles, wearing a beautiful traditional dress continued to impress year after year with her closing ceremony song, “Adi Sewra”, “Nation of Revolution”.

Instantaneously, the Mosob opened slowly for the curiosity of the audience letting gold and silver colors out representing the mining resources while the national emblem of the camel stood tall. The official ceremony came to an end with the national anthem sang loudly by all while keeping their right hand on their chest.

A beautiful ceremony, which put the bar far higher than last year, thanks to its musical drama and how it depicted the history of struggle, the resilience of the people and the continued challenges at independence while highlighting the beauty of Eritrea’s diversity through colors.

From the eyes of the audience and from a media perspective, many would appreciate to see more diverse artists and adding a mix of legendary artists and young ones together while adding perhaps translation services to invited guests from the diplomatic corps and others. Laying pillars will continue for the nation while engaging all layers of society under one mosob of colors.

“We must further strengthen the multi-dimensional cooperation between Eritrea and Egypt,” President Isaias