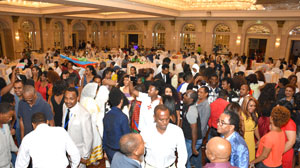 Eritrean communities in Sudan, Dubai and Oakland celebrated the 26th Independence Day anniversary in a colorful manner, according to reports.

Asmara, 29 May 2017- Eritrean communities in Sudan, Dubai and Oakland celebrated the 26th Independence Day anniversary in a colorful manner, according to reports.

In the celebration held in Khartoum on May 23rd in which a number of Eritreans, Sudanese government officials, members of the Diplomatic corps as well as friends of Eritrea were present, Mr. Ibrahim Idris, Charge d’Affairs at the Eritrean Embassy in Sudan, stated that the Independence Day has a special place in the hearts and minds of the Eritrean people for they have paid heavy sacrifice to realize it.

In a speech he delivered on behalf of President Omer Hassen Albashir, Mr. Mussa Mohamed Ahmed, Vice President of Sudan, explained on the  existing historical and fraternal relations between the peoples of Sudan and Eritrea and expressed admiration for the strong unity and harmony of the Eritrean people and the love they have towards their country.

A number of programs were presented reflecting the culture and customs of the Eritrean people and a pictorial exhibition was staged depicting the history, landscape and natural resources of Eritrea, the challenges encountered to achieve independence as well as the beauty and art deco of Asmara city among others.

In the same vein, the Eritrean Embassy in Sudan has organized a workshop pertaining to the history and civilization of the Dahlak Islands. The workshop was chaired by several Sudanese scholars including Dr. Tajedin Nur, Professor Ali Osman and Professor Entisar.

The Eritrean communities in Kassala region, Port Sudan and Gedarif have also enthusiastically celebrated the 26th Independence Day anniversary in which a cultural troupe from Asmara staged cultural performances thus adding color to the event.

A number of cultural and artistic programs and performances by students of Eritrean International School were staged thus receiving broad acclamation from the participants.

Mr. Mohamed Omer Mahmud, Eritrean Ambassador to Saudi Arabia, stated that the people and government of Eritrea have scored a number of tremendous development programs and expressed conviction that Eritreans residing in Saudi Arabia will reinforce their participation in the ongoing national development drive.