Health is a Right to Women too… 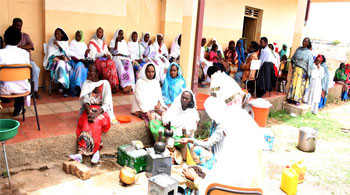 A mother of nine from the village of Mai Aini in the Zoba Debub region, Elsa Kebede, is one of the many women suffering from fistula in Eritrea. “I am waiting for my fifth surgery”, she said. One of the many patients of Dr. Habte Hailemelekot is delighted to be taken care of at the Fistula Centre in Mendefera Referral Hospital. As my colleagues and I randomly walked in the hospital during our time in the region this month, we witnessed a group of women sitting together alongside health professionals. To our surprise, among the patients, a group of sixty women from the National Union of Eritrean Women (NUEW) of the Segeneiti subzone were present and paid a solidarity visit to those sojourning at the centre.

The doctor left the group of women sitting together on the outdoor and approached us. Dr. Habte, an obstetrician by profession, was delighted to see a media crew in his premises. He quickly explained to us that the issue isn’t solely about fistula but also prolapse, a less known condition affecting a large amount of women in today’s Eritrea.
He showed us photos of cases of prolapse which may be disturbing to one’s sensitivity. In fact, prolapse is commonly known as female genital organs going beyond their normal anatomical structure due mainly to long hours of labour, several pregnancy and pressure in the abdomen due to lifting heavy weight and malnutrition. With quite a heavy introduction by the Doctor, we asked more questions as we further understood the daily suffering those women are going through.

Dr. Habte, who has been working at the hospital for the last 17 years, and since 2004 at the centre, conducts surgeries to women with fistula, prolapse and other conditions on almost a daily basis. Prior to the opening of the fistula centre, he explained how it first started in Massawa after a radio announcement in which about a hundred women presented themselves and were treated. Similar appeals were made in Afabet and showed comparable results.

Finally, the Ministry of Health (MoH) established the fistula centre in Mendefera to provide services to women. “I’m waiting for the 5th surgery as I have been suffering from fistula. I’m waiting to fully recover. The centre provides us with all we need, be it food, sanitation and care. When I went to Adi Keyih Hospital they told me to go to Asmara and that’s when they sent me to the Fistula Centre here”, Mrs. Elsa said.

Women such as Elsa living in remote areas have to carry the burden of traditional beliefs and the burden of the household. Women’s health is often neglected in less developed countries while many cultural beliefs continue to be the causes of women’s suffering throughout the world. Eritrea, also, is known for its cultural beliefs which have been used to subordinating women and girls. Female Genital Mutilation and Cutting (FGM/C) and other traditions that impact women’s health and violate their rights are strongly condemned and enshrined in Eritrea’s laws.

Despite efforts by policy makers, works remain in changing popular beliefs and traditions, particularly in remote areas. One of the regions, Zoba Debub, is still facing challenges in terms of child marriage, FGM/C as well as awareness on women’ health in general.

“The initial cause of obstetric fistula occurrence in Eritrea is due to long hours of labour during delivery without the presence of medical professionals in addition to cultural beliefs trusting that surgical intervention isn’t a solution and even less in childbirth through caesarean due to lack of awareness”, Dr. Habte stressed. Another important factor of such complications is child marriage and as the body of the girl isn’t developed enough to carry a baby and even less to give birth; many young girls who come to the centre become vulnerable and abandoned at very young age by their family and husbands. In fact, obstetric fistula leaves woman incontinent of urine or feces or both which causes the woman to be marginalized from the rest of the community. According to the Fistula Foundation (2016), an obstetric fistula is a hole between the vagina and rectum or bladder that is caused by prolonged obstructed labour which goes unattended and can last up to six or seven days.

However, some communities are showing different view such as the Afar, the Doctor said, “when I was working in the Danakil region and even those who come to the centre are accompanied by their husband; they support them and I haven’t witnessed any cases of divorces due to the women’s health conditions”.

Throughout the years, with the mobilization of NUEW and the MoH, cases of fistula are decreasing. Conversely, cases of prolapse are growing in number. “Many of our patients are more and more suffering from such conditions than fistula”, he said. Clearly, with the different sensitization programs and more and more educated population, many women who have been living with prolapse for 10 years or more are now coming out from the cold and have the courage to be treated at the fistula centre.

With about 208 surgeries conducted so far, since the beginning of the year, for fistula, prolapse and other female genital complications, the centre continues to be an important “healer” for those women. “I wasn’t even able to walk and now look at me, I am walking around and I could even go and see my kids in between surgeries. My husband is still around and, of course, he needs me to heal to take care of our nine children.” Mrs. Elsa said. Her last words are just reflecting how women continue to perceive themselves and how their household perceive their role in Eritrea.

Although in terms of the law, Eritrea has taken strict measures in ensuring women’s right as equal to men, in terms of societal values, yet, there is room for improvement. “We believe that through seeing real cases of women suffering from such diseases it’s the best way to raise awareness among our community and raising understanding that the impact of FGM/C and child marriage can cause such heavy damage… The question is “Do we have a same level of understanding and awareness nationwide? We need to conduct research and collect data on which areas continue to be affected, I believe that it’s a long struggle”, said Mrs. Aberash Mesfin, Head of NUEW Segeneiti subzone on a visit to the centre.

Clearly, raising awareness as well as giving access to such centre is vital for women and girls in the country by ensuring free health care, food, accommodation and transportation. In fact, the Ministry of Health and NUEW provide financial support to travel to the centre to those who can’t afford it.

In terms of raising awareness, women who recovered, are the best tools of sensitization upon their return to their community. “When one woman recovered, and she is accepted back to the tent of a wedding or she is in the middle of the village, the others would say “her uterus has healed and I want mine too”, in other words, five others would come in search of treatment”, Dr. Habte said. For that reason more and more women suffering from prolapse or fistula are now coming to the centre as there is an understanding that there is possibility to heal.

In regards to healing, the centre makes sure that patients are fully recovered prior to going back home. The minimum stay is about 6 months up to 18 months according to the number of surgeries. Elsa was able to visit home before conducting her last surgery which is due in a few days.

“We want to make sure that the patient is back in shape because once she’s back she will have to carry the burden of the household such as carrying heavy items, fetching water and even the husband expects to have intercourse again, which may put her at risk if not properly healed”, the Doctor further added. While recovering at the centre, patients are given the opportunity to learn new skills such as sewing or pottery but the end goal is that they return home. However, many remain in the centre as they have been abandoned by their families.

Healing, reintegrating to the society, being able to work again are all dreams coming true for many women who have been under the care of Dr. Habte and his peers at the Fistula centre. Without doubt, challenges in terms of human resources need to be addressed “we clearly lack manpower and what we are doing at the moment is training young staff coming from MOH aiming at giving health care to women in remote areas, but it requires strong commitment and passion”, the doctor added. Besides providing health care and vocational activities and counselling, former patients are also admitted during pregnancy at their 7 or 8 months and can stay up until post-partum.

The Fistula centre is clearly an example and a place of healing to those women’s suffering due to traditional beliefs affecting their health and status within their community.