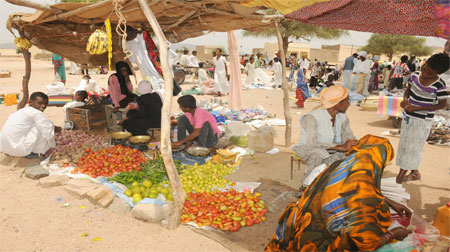 The northern most region of Eritrea has strategic significance for military purposes and that is why the successive colonizers, from the Turks up to the Ethiopians, built up their military bases in this sub-region. As a result, the people of this region were victims of enemy atrocities and were compelled to live in scattered settlements with almost no of social services.

There are many documented cases of such atrocious acts by the British war planes, the Italians and, more significantly, the Ethiopians on the people. Moreover, this region was the rear base for the 30 years of war of independence and the two successive regimes of Ethiopia who embarked early on to crush the just question of liberty. This sub-region is administered under Afabet sub-zone which is the largest sub-zone in the Northern Red Sea region, with 7,500 square meters. It has up to 80 thousand population, under 14 administrative areas who live predominantly by farming, pastoralism and trade. Here is covered some of the progress registered during the past 26 years of independence.

After independence one of the biggest objectives of the sub-regional administration was to mobilize the scattered settlements into a central area. The main centers selected for mobilization, besides the town of Afabet, are Kamchewa, Kubkub, Felket and Klamet. Toady all of them have basic social service provisions. All of the 14 administrative areas give access to potable water supply powered by solar panels, hand pumps and generators. And in Felket and Klamet administrative areas preparations are underway for electrical power supply.

The town of Afabet was founded during the Italian colonization as a military base. Until its liberation in 1988, after the annihilation of Ethiopian’s, it was a small town with small number of people and poor social services. But from then on it has grown at a fast rate to encompass up to 40 thousand people and various social services such as electricity, water supply, education, road and transportation, telecommunication, market, bars and restaurants, bakeries and other basic social services. After independence a master plan was designed and gave the town its current shape. With the flourishing social services it attracted more people and the scattered population is encouraged to settle at the center to become beneficiaries of the social services and for administrative convenience.

Most of the sub-zones people’s life relies on pastoralism and agriculture. In order to help the people with agricultural productivity, soil and water conservation activities are done. The rivers are diverted with the help of machineries for irrigation. Mr. Hagos Geberrtnsea, director of the Ministry of Agriculture in Afabet sub-zone, says “since the area is sandy and covered with powerful rivers from the Sahelian mountains, we cooperate with the people in routine preparation of water diversion systems for irrigation purposes and to minimize the erosion of farm land along the river basins”. Five check dams have been constructed in order to enrich underground water.

The Ministry of Agriculture in Afabet sub-zone cooperates with the farmers in providing facilities and advice in farm management. Most of the arable land is rain fed, with around 9440 hectares of land mainly producing maize and sorghum. Moreover, they have established reserved areas to increase and protect the forest and wildlife.

Through such efforts some spectacular agricultural developments in irrigation have been made. There have developed irrigated farm lands mainly in Kamchewa, Felket, Kubkub, Klamet around Hikano and in Western Afabet on 1688 hectares. The Kamchewa irrigated farm land from the Mogae River, with around 250 hectares of land is an example. Here, farmers produce mainly pepper and date palms. The pepper produced in the Mogae river basins is famous in Asmara and Keren markets and is sold at high price. What is notable here is that this garden was founded in 1996- 97 in an area previously covered with trees. Pepper is not widely produced in our country. Annually we import large amount of pepper from abroad. This means that we are losing the hard currency. The produce of pepper in this sub-zone weighs up to hundreds of quintals and its contribution in stabilizing the market price is not insignificant.

Moreover, hundreds of families are sustaining their lives by working and producing in these farm lands. The establishment of irrigation farms have created job opportunities to hundreds of families. Many farmers were pastoralists and farming has helped them to settle permanently. During the early foundation of these farm lands, every farmer was allotted one or two hectares and in the following years due to rise in the number of farmers who ask for land, the size of land distributed has been reduced. In different villages of the sub-zone there are hundreds of farmers engaged in agriculture.

The area around Afabet is a locust breeding area. Mr. Hagos says they carry out a routine control of locusts annually. As a result, the damage of crops inflicted by locusts has decreased in the last few years.

One of the priorities of the Eritrean government has been to educate the people to increase skilled man power. Education is a basis of development. It is among the sectors which registered great improvement within the past 26 independence years in Afabet sub-zone, says Afabet sub-zone administrator Mr. Ahmed Mohammednur. Before Eritrea’s independence there was only one school, from elementary to the secondary level that primarily served the colonizers’ families. But after independence, the number of schools in Afabet sub-zone has grown in to more than 5 pre-schools, 26 elementary, 11 junior and, two secondary schools. All of these schools are playing a remarkable role in the teaching-learning process. As a result, the illiteracy rate has decreased significantly.

The secondary school in Afabet has a laboratory and IT technology teaching aids. The quality of education is improving through the efforts of parent-teacher associations (PTAs) and by organizing tutorials and awareness raising campaigns. Annually hundreds of students participate in the summer civil service to engage in activities such as building soil and water conservation and others. The number of students dispatched to complete their 12th grade and participate in the matriculation examinations is increasing from time to time. Regarding female’s enrollment, although in the early grades it is satisfactory, their continuation up to the secondary level of education is not as much as what is desired, according to Mr. Abdullahi. But those who managed to complete their education are now in different administrative posts and institutions such as telecommunications, schools, hospitals, banks…etc.

Concerning the health sector, the people is getting more efficient services. Two hospitals (in Afabet and Kamchewa), and three health stations have been established for the remote areas that can’t access the health centers easily foot medics are deployed. From 1968 up to independence, only one hospital was giving service to all of the sub-zone, and the people at the peripheries were neglected.

The hospitals have their own ambulances. The physicians in the health centers work to improve the people’ health awareness through campaigns. Today, most of the mothers are giving birth in the health centers. Vaccination coverage has reached above 90% within the past few years. As a result, the mortality rate of mothers and children has gone down remarkably. The hospital in Afabet gives an OPD service, has a laboratory, and around 70 pre and after-natal mothers’ treatment department. Moreover, the malaria mortality rate has been reduced to the lowest level. Dr. Alamin Mohammed Ali, director of Afabet Hospital in Afabet, says “the area around Sahel is renowned for its salty water. Some of the health problems seen in the hospital are related to this. And we advise the people to boil the water for drinking”.

Despite all these efforts transportation service is not yet developed. The road paved to Nakfa is a seasonal road and in the summer it is difficult for transportation.

The government of Eritrea gives great attention to the rural areas. Development in a country is relative, development where one section of a society benefits from a country‘s resources while another section is neglected can’t be defined as development. Mr. Ahmed Mohmmednur, at the end, briefed us about some of the projects outlined to be completed in future in the Afabet sub-zone.

“Although Eritrea may have a variety of resources, the only resource we have ever relied upon is the strength of our people”, President Isaias Part III & final

More Works to Save Energy