More Works to Save Energy 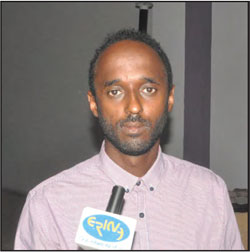 It was started by my Father, Andom Ghide, who was previously working in a ceramic company as a mechanical manager. He was in charge of repairing machines which made tiles for a wall. He tried to combine the electric heat with the clay and made some pan-like ceramics eventually turning in to Mogogo. He had fine results, and so was Andom Mogogo founded and launched its business.

The enterprise was established in 1970s and officially started its work in 1974. The business went well but generally the only changes that were made to the ovens were on the appearances. Until now, there hasn’t been any improvements regarding technical efficiencies. The electrical consumption of the ovens in the country are measured to be from 3 KW to 5KW; which is one of the main reasons for the power shutdowns and transformer blow-ups in the country.

Not only should we think about the electrical consumptions but deforestation as well. Most of the ovens that are used by people in rural areas are wood intensive ovens that are a cause for a loss of great number of trees. With this in mind, we wanted to do our part in reducing the unnecessary consumption of energy, particularly concerning trees.

Many points were raised to come up with the improved ovens and to provide the society with efficient, fair priced ovens. We did a lengthy research: more than two years. We had the assistance of the Ministry of Mining and Energy. Ovens which are easy to use, environment friendly, much lesser in size and most of all efficient with less power consuming are now finally introduced to the market. It is a work that has taken a great amount of energy but we couldn’t have done it without the help of the Renewable Energy branch of the Ministry. Director General Tesfai Ghebrehiwet of the department and his staff have done so much to give us insightful advices to our work.

Basically, we previously introduced the electrical Mogogo, wood intensive mogogo, smokeless mogogo (Adhanet), Gas mogogo and other stoves; so currently we prioritize to reduce the energy consumption besides the additional improvements on regards to sizes and effectiveness.

Changes in the smokeless Adhanet mogogo focused more in upgrading it to be mobile oven so as to make it usable wherever. More upgrading of it is that it can be separated and be used as a grill and hitter stove as well. Moreover, the previous smokeless stoves which were hand made so there was no uniformity in the making of smokeless Adhanet mogogo, as such, we have the molding machine that keeps the exact consistent shape as the Adhanet sample stove at the labaratory. Now the efficiency of the oven is raised to 26% from a 10%.

One of the main changes made to the electrical mogogo is the reduction of the possible electric hazards. We have managed to minimize it by starting the cooking heat at 800W to 1.5KW with a diameter sizes of 40, 48 and 53 for the pan. It’s efficient, so now it can be put away on top of the cabinets and under a table, and just anywhere. It has a durability of five years even if constantly used. The same goes for the different rocket ovens. We have two types of rocket ovens; wood and charcoal rocket ovens. We have upgraded the charcoal oven to an 8% and the wood stove to 26%.Costumers are also granted with the ability of acquiring more ovens over the years with grants provided by the enterprise.

We had positive feedbacks from the attendees. It actually was very encouraging. The aim was to display the improved products to the public and raise awareness on the loss of energy that has been taking over the years. People found the added values very interesting and learned so much during the exhibition. The products are a big help for energy and financial savings, also, a major step up in lowering health problems for mothers and children caused by the heat or smoke coming out of a conventional mogogo.

We are also looking forward to export the products. This is an additional plan besides fully serving the society by producing more competent and more user friendly ovens.

Mainly the production are expected to deliver great result on the country’s energy consumption. Further, the production is expected to reduce the electric bill of thousands of households with an expected 50% downsize. Health problems that used to be caused by conventional mogogo are also our greatest point of interest, we are certain that this new approach won’t be futile on those regards. And once these products are put to use, the matter of deforestation will no longer be an issue. But personally, I think that there should be constant campaigns and discussions to raise awareness of our society on energy saving.

I want to thank the Ministry of Agriculture for all their support, especially, Minister Arefaine Berhe. He made everything possible and he has helped us with more than we could have imagined. More thanks to the Director General of Renewable Energy Department Mr. Tesfai Ghebrehiwet and his staff for the persistent efforts they have put up. I would like to give my gratitude to Futsum Hagos from the Ministry of Agriculture. I am grateful for all the assistance our project saw.