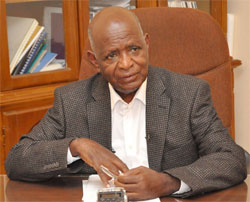 The Eritrean Government has issued a new proclamation No. 179/2017 and Legal Notice No. 127/2017 for environmental protection, administration and restoration of environment.

Asmara, 05 June 2017- The Eritrean Government has issued a new proclamation No. 179/2017 and Legal Notice No. 127/2017 for environmental protection, administration and restoration of environment.

In an interview he gave to the local media outlets on 01 June, Mr. Tesfai Gebreselasie, Minister of Land, Water and Environment, indicated that the new proclamations will serve as guidelines to properly administer and conserve as well as to restore the environment.

Minister Tesfai pointed out that as every citizen has the right of use of resources has also the responsibility to readdress the environment. He further said that every member of the society and the concerned institutions have the duty to make follow up and take correctional measures to those involving in activities damaging the environment due to lack awareness or deliberately.

The Minister also stressed that prior to implementation of any project, appraisal on its environmental and social influence as well as the interest and rights of future generations should be taken into consideration.

The Proclamation comprises 7 Chapters and 42 Articles including general regulations, objective, administrations and control of environment, National Assembly for environmental administration among others.

The Legal Notice comprises 4 Chapters and 17 Articles including evaluation on environmental influence and permission, environmental pollution control among others.

The Proclamation has been issued at the Gazette of Eritrean Laws.

Likewise, the Ministry of Land, Water and Environment indicated environmental sanitation popular campaigns has been conducted on 04 June in all cities and semi-urban centers in the country in connection with June 5, International Day of Environment.