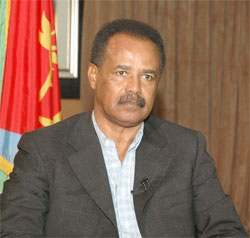 President Isaias Afwerki has sent messages to several Heads of State and Government urging them to use their influences in the UN Security Council to redress the injustices perpetrated against Eritrea.

Asmara, 06 June 2017- President Isaias Afwerki has sent messages to several Heads of State and Government urging them to use their influences in the UN Security Council to redress the injustices perpetrated against Eritrea.

In his message, President Isaias stressed that the UN Security Council has the obligation, primary responsibility and legal mandate to ensure and promote the security and peace of sovereign countries and thereby guarantee the maintenance of international peace and security.

The President referred to the border war between Eritrea and Ethiopia that raged for two years from May 1998 until June 2000 entailing a huge loss of life and enormous destruction of property.  The “border dispute” was a simple ruse as the boundary between the two countries was defined and determined without any ambiguity in colonial times. But Washington feverishly worked at the time, through the State Department, to drive a wedge between the two peoples who have deep historical and strategic ties in order to foment a crisis and micromanage the affairs of the Horn of Africa.

President Isaias went on to highlight that even though the “border conflict” was legally adjudicated on the basis of the Algiers agreement, the US Administration used its clout in the UN Security Council to further exacerbate the crisis and to block the enforcement of the final and binding arbitral decision.

The final and binding legal Award was not, however, amendable to alterations through diplomatic maneuvering, President Isaias noted.  In the event, the US and its allies concocted a fictitious case accusing Eritrea of supporting “Al-Shebab” to impose unwarranted sanctions against the country in December 2009 in the name of the UN Security Council.

Demonization campaigns that have been underway under the bogus pretext of “violations of human rights”; periodic military attacks launched against the country; and organized criminal networks of human trafficking set up to precipitate and incite illicit migration of Eritrean youth are part and parcel of these schemes of harassment,  President Isaias added.

President Isaias finally stressed that it is high time that the flouting of the rule of law; the violation of international law; and, the prevalence of the rule of jungle are terminated once and for all. He further reiterated that the UN Security Council is bestowed with the legal obligations and responsibility, above any other body, to remove occupation from our sovereign territories; rescind the unwarranted sanctions imposed against Eritrea without factual substantiation; and, bring to an end the incessant attacks perpetrated against the country through various forms.