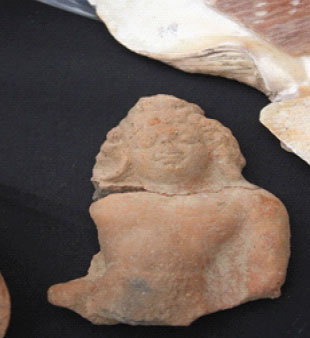 The surveys of 2003-04 in Adulis by the National Museum of Eritrea, University of Asmara, University of Southampton and the Northern Red Sea Museum have identified eight types of amphora ceramics dated 2 millennium BC to 7th C AD, which were imported from Greek, Egypt, Tunisia, Italy and the highlands of Eritrea. This evidence shows how active Adulis had been in trade routes with different parts of the world.

Hence, the surveys had established the exact location and size of Adulis and the direction of the two feeder harbors (Gabaz and Semedi) which significantly heightened the awareness of the surrounding community on the conservation management of the site. Archaeological evidences and literary sources both suggested that there were other coastal settlements or anchorages that were probably part of the Kingdom ruled by the main port of Adulis. The architectural style in Dahalak Kebir and Adulite pottery found in the Dessie Island, for instance, are similar.

In 2005 David Peacock and Blue Lucy from Southampton University had conducted research in Egypt on pottery believed to have originated from Adulis. The Adulitan pottery was found at Egypt’s ancient ports of Myos Hormos and Berenike together with ivory and tortoise shells exported via Adulis. Pieces of Obsidian from Roman contexts at Quiser (Myos Hormos) have also been analyzed and showed to have an Eritrean origin. The discovery of shipwreck at Asarca Island by Mr. Pederson in 1999 also represents a rare archaeological opportunity to study the ancient seafaring of the Red Sea. It is probably dated from 4th to 7th century AD in Eritrea`s Adulite period, a heyday of ancient trade on the Red Sea. Amphora from the Asarca Island may be of Mediterranean origin and have archaeological parallels on terrestrial sites of Eritrea, Egypt, Spain, Tunisia, etc.

Based on different ancient accounts there were different belief systems in Adulis before the introduction of Christianity, in the 4th century, and the religion of Islam in the 7th century A.D. For instance, beliefs in the Greek gods of Zeus, Ares, and Poseidon were among the most common and famous during that time. As it is confirmed in the book “The Christian Topography and The Kingdom of Axum,” the governor of Adulis, Asbas, asked Cosmas to copy the two inscriptions on marble thrones in Adulis. The Greek inscription, which is probably buried in the ruins of Adulis, was “decorated with figures of Hercules and Hermes, a more elaborate version of the thrones set up by the Axumite kings and dedicated to pagan gods, to commemorate their victories.”

The first stratigraphic excavations in Adulis started in 2011 in five sectors of excavation in the framework of a project involving the National Museum of Eritrea, Northern Red Sea Regional Museum, the CeRDO, the Università Cattolica and the Politecnico of Milano and the Università di Napoli “L’Orientale”. They have focused investigations on the stratigraphic and chronological sequences through radiocarbon dating and pottery analysis and through the study of distinctive architectural features. So far, four main phases have been identified, dating from the 1st to the early 7th C. AD. Thus, the Eritrean-Italian Mission confirmed that important trade relations and cultural exchanges had been maintained with the Mediterranean basin, Far East, and the African hinterland. Imported materials point to connection with Egypt, Sudan, Jordan, and the Arabian Peninsula as well as with the central and the eastern Mediterranean, Iran and South Asia.

The Byzantine church as a religious center was common from 5th to 15th century AD in Greek, the Roman Empire, Egypt, and Syria and so on. Thus, the early Byzantine Church unearthed and revealed in Adulis dates from the 5th-6th century AD as Christianity officially entered the region in the 4th C AD. Islam also expanded from Mecca in 615 AD through the Red Sea to Massawa and Adulis via the Sahaba, followers of the Prophet Mohammad.

The most outstanding findings since the 2011 excavation at Adulis include a human figurine representing the Gupta Art (well-known in the Indian religion) and dated to 4th to 6th century AD, a contemporary “Tannur” (a pit for roasting fish and that is still functional in the coastal region of Eritrea and South Arabia) dated to 5th to 6th century AD, gold and bronze coins, tiny gold chain fragments, imported mortar from the Mediterranean area bearing the stamp dating the 2nd century AD, an imported lamp from North Africa and Roman Empire dated to the 2nd century AD (well-known and adopted in the culture of the highland peoples of Eritrea), Neabtian pottery from Jordan dated to 2nd to 3rd c AD, mortar from the central Mediterranean area(1st- 2nd c AD), human burial remain (dated to mid- of the 4th c AD), etc. Until the present times, more than 50 different local and 7 types of imported potteries have been identified in the excavations at Adulis.

In conclusion, the ancient port city of Adulis was located in a very strategically important position along the Red Sea coast. Thus, we can determine from the ancient literary sources and earlier and recent archaeological excavations that Adulis had maintained a strong and autonomous power of economy and social relations with different parts of the world and was governed by the local king Asbas or Abas.

It was a ground base for the Adulite-Aksumite civilization, its development and expansion, a place where diplomatic relations, military expeditions and trade connections had taken place and was the main gate of Christianity in the 4th C AD and Islam in the 7th century AD in the region. The development of Adulis as a port had started in the Ptolemaic time (3rd century BC) rather than during the Aksumite Civilization from the 1st -7th century AD. Therefore, excavation in the virgin land of Adulis would provide and reveal to the world and the region the history, trade relations and socio-cultural interactions with different parts of the world. Future plans include developing an Archaeological Park in the ancient port city for every domestic and international tourists to enjoy.