More Green in the Market 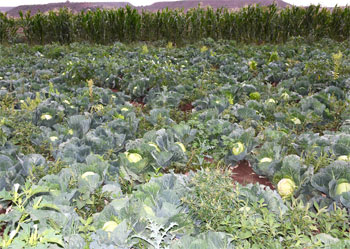 “I managed to build a house in my village for the joy of my kids, with their own bedroom”, said Mr. Efrem Abraham, 45, a farmer and father of 7, I met him in his field in the outskirts of Mendefera. He is an exemplary farmer in the subzone. With his 15 hectares of cultivated land, his hard work is paying off. Farmers such as Efrem are now organized into a cooperative of vegetable and fruits farmers. The 700 members’ strong association, including 15 villages, is working in partnership with the Ministry of Agriculture which provides them with technical assistance among others.

As the region is known for its rich cultivated land and better rainfall than any other parts of the country, important has been given in recent years to move into modern method of farming for sustainable growth.

Mr. Bereket Tecleselassie, Head of the Ministry of Agriculture branch in Mendefera subzone, explained that farmers in the region are organized into associations such as the bee farmers, milk producers and the vegetables and fruits cultivators. Getting organizing in associations allows farmers to have access to training, technical assistance, pesticides as well as subsidized seeds and fuel.

“I have been working on this parcel since 2014 and being a member of the cooperative gives strength and voice to all farmers”, stressed the farmer who grows onions, cornflower, tomatoes, zucchini, cereals, among other vegetables, and fruits. “The aim of the Ministry is to motivate our farmers to go beyond producing for their family and surroundings and aim for the nation as a whole”, said Mr. Bereket while explaining the vision and aims both of the cooperative and the Ministry of Agriculture.

The tradition of growing vegetables and fruits in the region is well known. The question now is how to actually shift from traditional method to industrial cultivation in the near future. To enable such development, irrigation systems and access to electricity are essential tools. Thus, Zoba Debub is progressively working on the development of multiple micro- and large- scale dams and water points. In this regard, Efrem’s crop growing endeavor is facilitated with a water dam as well as an electric water pump he installed himself.

As I walked through Efrem’s field, the rain of the previous night brightened the green landscape of the area, a breathtaking scenery! Legumes, fruits, cereals surrounded us.

With only ten people working on a daily basis, commitment and long savoir-faire of this farmer have clearly revealed his success. “I have learned to be a farmer and take pride in it since I was a child. I come from a farming family. However back in the days, agriculture was very traditional and all we produced was just enough for the family”, Efrem explained.

Through time, when he acquired this parcel for rent and when he became member of the cooperative, he said that he was able to strengthen his capacity by taking courses and training, including quality control mechanism under the guise of the Ministry of Agriculture. “I can buy seeds from Halhale and get any assistance when needed”, he said when listing the benefits he gained by being a member of the association.

About 80% of the inhabitants of the region are farmers and they depend heavily on livestock and crop production. Efrem, manages to have a steady income and sell his products directly to the local market. Thanks to his built up reputation and quality of his products, Efrem is increasingly gaining multiple costumers who go directly to his field and buy firsthand acquisition.

Without doubt, the job isn’t without challenges in terms of human resources, fluctuation of prices as well as expensive seeds affecting farmers’ revenue. Nonetheless, organizing into cooperative is noticeably giving greater voice to the farmers.

Besides cultivating, the farmers come together for further collective gains which include capacity building aimed at boosting production. In this regard, the Food and Agriculture Organization’s (FAO) findings of the year 2000 pointed out that out of 12,200,000 hectares of farm land is available in Eritrea, only 4.62% is rain-fed while the irrigated land accounts for the 0.18%.

As the records of 2000 refer to a time when Eritrea just came out of the border war, the scale has evidently gone up since then. Self-reliance in food and water provision are the top priorities of Eritrea’s National Development agenda and the nation rejoices in food provision schemes.

Developmental schemes which include the construction of water dams and more are surely motivating farmers like Efrem to contribute to the overall national productivity. A joint endeavor of individual farmers and their private sectors partnering with the government, are boosting productivity that matches up the increasing food demand of the country. It may as well give an impetus for future export opportunities. Let’s just wish for more green in the market!