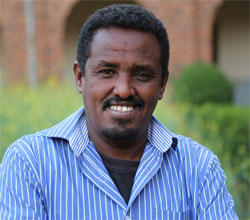 Back when I was just a kid, I was part of a church group which had artistic activities. I was interested in reading: books, journals and especially poems. One day I presented a poem to the group; it got me a round of applause from everybody there. It was that poem that triggered my potential to be exposed. After Independence in 1992 we formed an art group called Omega. There, I gathered all of my energy and presented many works which got positive response from the audience. I wrote numerous plays. My first one, “Menqb” got a lot of attention and made me want to work more and harder.

During Omega’s prime time, it was time for me to join the National Service. I went with the 1st round to Sawa. In Sawa I turned my potential to profession. With many other artists present at the place, we formed a cultural group. The spirit was high and we were really competitive. I was writing, yes, but I also did some acting.

The youth’s impressive tokens became my prime source of inspiration. I finally made a drama worth airtime, Shimti Nebri (Guts of a Tiger). It was aired in Eri Tv! The drama was about a guy who was torn between the love of his nation and the love for his woman.

My national duty, then, took me on a journey towards Nakfa. A place with diversity of culture and history. I continued writing on scripts and different articles for the National newspaper in Tigrigna Haddas Eritrea. Then when I was assigned to the capital, Asmara, I joined the newspaper and then moved to a private newspaper of the NUEY’s Tirgta. In addition to doing my job I continued pursuing my artistic profession in directing movies and dramas.

In 1998, I went to and lined up in the trenches alongside heroes and heroines when the Ethiopian aggression begun. It was a historic time in which Eritrean youth united to defend their country. We proved that nothing changes when it comes to National matters even if generations go by. During the war I was working as a reporter from the battle fields. We also formed cultural groups which, I believe, were very entertaining and motivating for the army.

Later, I worked at the HRD department in NUEYS. Starting from 2006. I had worked as an administrative head in many regions, including Gash Barka and Anseba. And still I never ceased writing and directing plays and movies. I wanted to keep working and coming up great works, and that is why I used each moment I got to write. To mention few of the movies I have directed; Sikta semaiat, Gual intetkoneley, Qelebet and recently Zeyregefet Enbaba, a film which was made here and in America. All this movies were very popular at the time.

In 2004, when the Youth Festival started, I was able to present plays at the opening ceremonies of the festivals. Specifically at the 4th youth festival in 2010, I was a chairman of the event and presented a play which got a lot of positive response. It was one of my biggest works.

Speaking of biggest works, during the 2012 independence celebrations at Gash Barka, I came up with yet another play that reflected the Black Sunday. It is a story of the massacre of Aqordet, a time where so many innocent Eritreans were killed outrageously for a traitor’s murder. Another is Qelebet, a documentary film I directed with the help of

Amanuel Barya from the Ministry of Information. The film showed the event that took place on 24th May 2000, a battle between Eritrea and Ethiopia at Adi-Begio’. Many Eritrean youth paid their lives to keep the liberty. It is a historic moment.

Again this year we had planned to make two documentary films. However, we were able to complete only one because of budget problems. Deglel Awla, we studied the story together with Akal Mebrahtu who is a news reporter in Gash Barka. It is a great story which reflected the great love and willingness to sacrifice everything for freedom. I was also lucky to present a musical drama that mirrored best the theme of Independence and also the core philosophy of our nation building. Eritrea is what it is now because of all the stages, rough and smooth, that it went through.

We have a rich history. The history of our people is abundant. We should learn to explore it and complete the mosaic of our history. A myriad of great events are scattered in memories of many people and they need to be documented for people to know and learn of the great history Eritrea has. There is so much that we need to know.

Working on different documentaries, we have come across interesting stories which we weren’t even looking for in the first place. It is like you discover something only to uncover another greater thing. This makes me and my colleagues in the field of arts wonder how many more great chronicles we haven’t uncovered.

Today’s generations are just lucky, in the sense of owning an awesome history, and because many history makers are still alive –old but alive. We should tirelessly document their stories for posterity.

Also, personally, I would like to convey my gratitude to the people and institutions that had helped me a lot in my works. The PFDJ Cultural Affairs has sponsored many artists, including myself, to study Theatrical Art at SMAP Institute. I should also mention my gratitude towards different officials who facilitate my projects. Also to the administration of the Southern Region, for allowing me to advance my education. I am currently studying advanced literature.