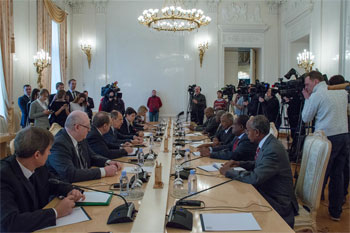 On June 12, 1990, the Congress of People’s Delegates of Russia adopted the Declaration on State Sovereignty that opened a new phase in the development of Russian statehood.

Today Russia is a country with high potential for steady and stable development, a country that is able to defend itself with the most advanced armed forces, yet consistently pursues peaceful foreign policy. We stand for maintaining stability and security on both regional and global levels, advocating diplomatic settlements of crises and counteracting WMD proliferation.

Today, Russia Day is one of our major national holidays. We honor our country, our Russia, which we love and take pride in. The civic, labor and military valor of the Russian people is evidenced by the many victories and achievements throughout our history. Today, feelings of patriotism and love for the Motherland are truly invaluable for our vast multiethnic country. These noble qualities and the steadfast civic-mindedness of our people underpin the country’s unity and sovereignty.

Of course, many factors are essential for the security of the country and its stable development. However, they are only effective if people believe in their Fatherland, have respect for it and support it, if they consider our country the best and aspire to live and work for its prosperity.

June 12 in Russia is a date that marked the beginning of a fundamental transformation. It was necessary at the time, but just like many radical reforms they created great difficulties and, at times, dramatic moments for our country and our people. Today, we remember that time as the distant past, though not much time has passed. Things that were absolutely new, unknown and complex have now firmly taken root in modern life.

Russia has proved that it is able to improve itself, strive for the best, make dramatic breakthroughs toward a new political, economic and social order, and not just adapt to changes but achieve great success, overcome difficulties by relying on a foundation of civic and ethnic harmony and bolster its sovereignty. We have clearly defined our national interests, declared them and steadfastly defended them. We look ahead with confidence and set strategic objectives.

Russian people are proud of their great country by right. At the same time, we neither aspire for any exclusive rights whatsoever, nor patronize anyone or try to teach others how to live. We respect historic heritage of all countries, their cultural traditions and choice of the socio-political system. Russia is against interference into internal affairs of other states, financing and inciting activities aimed at overthrowing legitimately elected leadership, altering political system or constitutional order of other countries.

African direction is becoming more and more significant in Russian foreign policy. Russia has been consistently advocating the creation of comprehensive architecture of equal and indivisible security, cooperation and sustainable development with consideration of legitimate interests of all countries of the region.

On this basis, Russia is building relations with the State of Eritrea. Today it is no exaggeration to say that Russian-Eritrean relations are friendly and dynamically developing. I should underline a great role of the two leaders – President of Russia Vladimir Putin and President of Eritrea Isaias Afwerki, who target their governments to intensify bilateral and multilateral mutually beneficial cooperation for the benefit of Russian and Eritrean peoples.

Today the Russian-Eritrean relations are developing in various areas, including economy, finance, industry, trade and education. The positions of Russia and Eritrea on the topical international issues are similar or very close.

A new impulse of Russian- Eritrean relations was achieved in January 2017 during the visit of the high-ranking Eritrean delegation led by the Minister of Foreign Affairs, Osman Saleh, to Moscow. The Russian and Eritrean sides have achieved agreements in the fields of trade and economy. As for the bilateral relations between Russia and Eritrea, I would like to note that our country’s leadership has repeatedly stressed the importance of the development of mutually beneficial and long-term relationship. So, President of Russia, Vladimir Putin, in his message to President of Eritrea Isaias Afwerki on the occasion of the 26th anniversary of Eritrea’s independence day expressed confidence “that the relations of friendship and cooperation between Russia and Eritrea will continue to actively develop for the benefit of our peoples and in the interests of ensuring stability and security on the African continent”.

Taking this opportunity, I would like once again to congratulate the Eritrean people on the 26th Anniversary of Independence of Eritrea.

Today I would like to express my gratitude to all friends of Russia and colleagues who joined us to celebrate our National Holiday – Russia Day. I wish the friendly Eritrean people happiness, prosperity, and new success in building a prosperous nation.