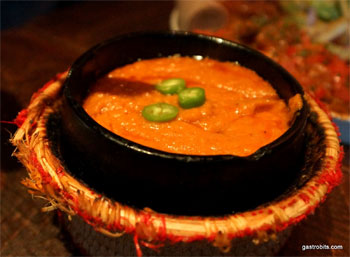 Shiro is a traditional food. Rating this food could be one of the most important ratings ever needed in local context. Because there are some people who mock some foods without knowing how these foods have come to be served.

Every society in the world either culturally influenced or through emerging lifestyles adopts a habit of cooking and consuming a favorite food on a regular base. The Italians relish Pasta, the Chinese Sushi, the Sudanese Ful Mesellah (stew of grinded beans), the Saudis rice with roasted chicken (Dijaj) and the sticky vegetable stew or Mulukiya and Eritreans have Shiro, a typical cuisine served any time of day.

Basics of readying a tasteful Shiro may seem a piece of cake for any local consumer. The genuine formula behind it needs careful planning and mixing of several spicy ingredients that would make the Shiro recipe delicious and colorfully appealing. When fresh hot Shiro is served atop a hot Enjera, one who is eating can’t help it and simply adds more and more. Its limitation is that it stays not more than a couple of hours in the belly unlike the other junk foods. But, it is tasty.

Shiro is basically sourced from a legume known as Ater (chickpea), an originally Asian plant served in various forms of dishes in several countries. After mothers get this legume from the market or a relative farmer brings it to the house, it is made to boil in water for some time and spread in the compound to dry by the sun before it is taken to be ground.

After the Ater dries, it is roasted and later ground at a mill. Before the Ater is placed in the grinding machine, the chaff needs to be purged. Spices are added to ground the Ater. The spices add flavor to the Shiro powder. Spices such as garlic, Xaeda Azmud (White Cumin), small pieces of Chena Adam (Rue plant), Abaeke (Fenugreek), Seseg (Basil), pepper as well as salt are added. To eat a luscious and colorful Shiro, mothers have to at least prepare and make up all these ingredients and eventually feed the family.

It does not stop there. On the other hand, in days where Meat stew gets family members bored or in some chilly days cooking Shiro is one of the preferred dishes. However, what annoys me most is when I hear locals say that they hate eating Shiro. They have no idea how much it is adored abroad. It may not be some kind of food that you would like to have daily, but at least these types of people should have been grateful for their mother’s efforts in making this especial type of meal. What they say is just like an American telling me he doesn’t like eating Donuts or the Hotdog and the Arab ceasing to eat rice.

Shiro comes with many stories and funny events. My mother used to tell me that my father didn’t like it. Once in a family of three, father, mother and a child, Shiro stew was the only regular dish in the house. The stew made it all days in a row, breakfast, lunch and dinner, except on holidays. The day after holiday, in school, a teacher asked his class what got them excited in holidays? The child, with excitement, raised his hand before all the students and the teacher gave him the chance to answer.

“We get a “therefore mark” meat stew in our family Shiro”, referring to the three thrown meats in the Xahli (a traditional clay pot) of Shiro. Such a habit of consuming Shiro might sometimes be irritating, but the tradition teaches people should live according to their standard reflect not their neighbor’s.

The Shiro that is cooked in our houses is very delicate but we only know how it tastes not how it is actually processed from the beginning. I can even dare to say some of our sisters (not mine) do not know how it is made. These girls could have been called Bosorotat or Inapt (in that particular skill) traditionally.

The accurate and most common Shiro cooked in Xahli by our skillful mothers has its own procedures, unlike we think; adding the Shiro powder in a boiled water and getting it off the stove minutes later. Adding the desired amount of chopped onion with some amount of oil and frying the onions is the first step. Putting a tomato paste and frequently steering it until the onions wilt.

Some salt is then added to get the right taste. Some chili pepper is added before filling 80% of the pot with water. The timing to get these ingredients into the dish might depend on how hungry a person is while the cooking starts. The moment the water in the stove reaches a boiling point and starts to wriggle the Shiro powder makes its way to the pot and now is when the patience and proficiency of the cook is tested. Now is the time to do the Mshraw or simply steering the powder until it is fully mixed with the water. Finally throwing a green pepper and adding a table spoon of ghee would make the dish yummy. Shiro is served to a members of a family sitting in a circle or Meadi.

It is commonly believed that crunching green pepper with the stew opens appetite. The Shiro can also be served mixed with shredded enjera and eaten with a spoon; this variety is known as fit fit Shiro.

When food stuffs take such procedures to be delivered in a plate, they are especial plates. The society gives credit to Shiro serving it anytime of the year. In the times of fasting, particularly, Shiro and lentils are among the usual recipes. If you ask me how much I would rate this food in comparison to other local dishes, I would give it seven out of ten.

“A child has the right to be healthy too …”

“Eritreanism” – An Identity of the Disciplined