Eritrean Diaspora honoring our martyrs by fostering their families 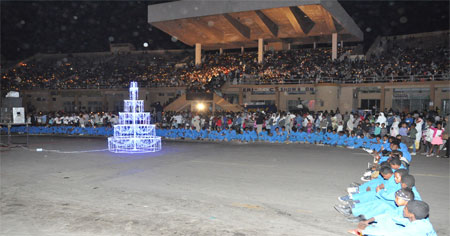 One of the noble cultures of the Eritrean people is caring and supporting one another. In summer many Eritreans in diaspora come to visit their home land. They come not only to visit their families but also to commemorate Eritrea’s fallen heroes on June 20th. During the armed struggle and in defending Eritrea against the war of aggression of TPLF, the Eritrean diaspora played their role. Eritrea has a great place in the hearts of the diaspora.

The Eritrean diaspora have been assisting their families as well as their state in many ways. One of the most formal ways of giving assistance is the 2% they pay from their income. The government uses the money on different aspects of state development. The Eritrean diaspora have also been engaged in efforts to help the families of Eritrea’s martyrs. This is done with full consent and motivation to give what they could to ease the government’s burden.

The government of Eritrea takes full responsibility for the welfare of the families of the martyrs who gave their precious life for the love of their country. Since 2004, the government has been giving money to the families of martyrs. In the first phase of the compensation program every family of martyrs received ten thousand Nakfa. However, the money was not sufficient to bring a promising result in the lives of the families. Taking this in to consideration the government is giving five hundred Nakfa every month to every family in order to minimize the problems.

Supporting martyrs’ families should not be only the burden of the government, but the duty of all Eritrean citizens. It was superior and fair to play part in the fostering programs. The initiative to assist the martyrs’ families was taken by the diaspora themselves.

Eritrea has a significant number of families, which lost their fathers, mothers, sons and daughters in the struggle for liberation and in defending the nation against TPLF aggression, with no means to support themselves. It is important to go back and refer to the history of diaspora Eritreans and learn from our past experiences that helped us to remain steadfast, united and, finally, achieve our collective goal of independence. In continuation of that history, the care of those families of the martyrs rests in the hands of the government and the diaspora. When it comes to supporting our disabled veterans, orphans, widows and families of those who gave their lives during the liberation struggle and the border war, there is no doubt that the diaspora are giving whatever they have and could. Some are providing support on regular basis and others support for certain period of time.

The main aim of this assistance is to share the responsibilities of the government of Eritrea on fostering and supporting the families of martyrs .The government of Eritrea has been working hard for the wellbeing of Eritreans no matter which part of the country they live. Among the most in needing of help are the families of the courageous martyrs’ who gave their lives for others to live in this hopeful and strong independent state. Realizing this, the Diaspora have initiated fostering the families of those selfless citizens.

In addition to that giving families the care they deserve and making sure that they don’t feel deprived of the love they need in the hearts of their fellow Eritreans.

The Ministry of Labor and Human welfare acts as the main arm of the government in giving assistance to the families who are economically unable to lead their lives. To make this a reality, the ministry set strategies and procedures.

The first procedure was to do a thorough study about those who were totally incapable to lead their lives with the resources they had and the support the government provided.

Although life outside the home land may be challenging, the Eritrean diaspora are giving the government a helping hand in caring for the families of martyrs. The history of our martyrs and the struggle for independence are the corner stones of our history and we should always remember that. This is what makes us great as Eritreans.

20 June: Not in Sorrow but with Pride, We Remember You