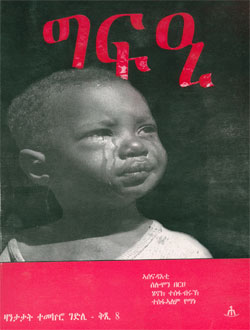 “….the neighbors couldn’t handle their grief. They saw Dawit, the 10 month old baby, shot in the back while his mother was breast-feeding him, lying dead on the ground….”.One of the short true stories that are published on the event of the 20th June. A day dedicated to remember the heroes who paid their lives for us to be here today. This is a day to remember those harsh days which torture our people.

The book titled, ‘Agony’, is the continuation of seven volumes that were published before. The previous books talk about different true stories of the past heroic deeds of the Eritreans and the details of what it took to get free Eritrea today. Also this book consists of over 40 stories of the anguish that took place across the country. On the occasion of the book inauguration of Gfee’ , Agony, I had a chance to talk to some of the editors, writers and also eye witnesses of that time.

On the occasion of the 20th June, Q&A would like to say, “Glory to those who had given their precious lives to give us nonviolent life. May their souls rest in peace!”

Eight volumes have been published so far: ‘Stories of the experiences of the armed struggle’ is a collection of many booklets that contain a myriad of narratives. The volumes are important in documenting the history and enlightening young generations. The idea was raised at the 25th national celebrations. The first volume was published during the 25th anniversary of the demise of Nadew in Afabet to remember the war. It consisted of about fourteen different short stories. After the first volume, everyone agreed that the work should continue, and, as a result, we published the second volume Meqeyro (Harbor of change) on the event of the demise of the Northern East Sahl. Regarding the 25th anniversary of Fenkil operation, which resulted in the liberation of the port city of Massawa, we had the 3rd volume published, Fenkil. These books were very important as they tell stories of the times, true stories. In political history books, the topics only focus on the general happenings. It doesn’t always focus on the stories of the families but all in all of the society. Which I think, by the way, is important to be documented. Honestly speaking, in this involvement I have learned a lot. For instance, when you hear that 200 people were murdered somewhere, to you it is just a number. However, when you know it deeply as in those books, you feel the pain and the agony these people suffered.

Again, as the continuation of the volumes, we had three different volumes on the occasion of the silver jubilee of Eritrea independence. Mefexemta (the conclusion), is a book that tells the stories of the final battles around Dekemhare and the surrounding areas. The other volume talked about the EPLF stronghold of Sahl. The 6th volume was about the struggle Eritrean women went through. This year Nakfa, the 7th volume was published on the 40th anniversary of Nakfa’s liberation. Plus this last one Gfee’ (Agony). This book takes you back to the dreadful times of the colonization and you can see how people suffered. Towns were destroyed and innocent families were killed without a cause. It also has got letters and documents from the Ethiopian administrators, saying how many people were killed and towns destroyed.

There are three more volumes to be published by the end of this year and in 2018. It is the work of many writers. These writers research and find the right people who were actually there and, thus, write the stories. It is a lot of work but it is worth doing as we are documenting the real history of the past.

It is a great experience for me. I have felt every pain that the story tellers had to tell. Compared to what really happened in the different places of the country, the stories written

aren’t many. There should be more books about our history. Listening to those people narrate their pains emotionally made it much harder to write their stories as I am afraid not to ruin it or make it look easy. We have got a deep history as Eritreans. Also, their stories make you go back in time and see how the peaceful people were suffering like that in their own home land. We had to be selective to write the right story as we were given limited pages. Every family had something to share regarding the outrageous times of colonization; some of them died in fire, some with stones. This makes it hard to choose which to write. Because, honestly, every single story we heard is worth documenting.

I have covered three short stories that took place in Keren, Geleb and Sheib. The story of Rora biet Gebru in Keren, which the enemies burnt, and on another day killed 45 people who they accused of having a hand in helping the EPLF. But, fortunately, three people got away, who some of them are the story tellers on this book. Also the story of Geleb, they hanged 26 men and burned women alive. Furthermore, what makes the Shieb story different is they run over 80 people with a tank. Their bodies couldn’t even be buried. And also over 400 people were killed brutally. I personally think that the new generation should read this book to know the stories of their people and appreciate the freedom.

On December 28, the Ethiopian soldiers came and took us in the middle of the night with my father and brother. They asked my father that if it was true that he let me marry a

freedom fighter. My father wanted to prove them what they heard is a lie, he travelled more than 40km to get my husband. They also took other men, but we thought that they were just taking them for a witness. It was not, what the soldiers wanted to do was to kill Eritrean civilians to avenge one Ethiopian solider who was killed by the Eritrean fighters.

My pregnant mother was with me, scared to death that I might be killed. Once they got my family and neighbors, they spared me. They have been walking all day in the sun, and when they get to Debresina they asked my father if he was happy that they let me go. He told them yes. And they ordered to chain them all immediately. My father begged them to leave his son alone but offered that they can do whatever they want with him. They never did, they killed them all in a ruthless way. Thank heavens for our children who spared us from the evil enemies we had.