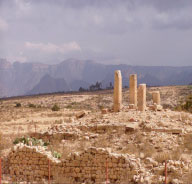 The history of archaeological research in Eritrea has been to a large extent characterized by a focus on the central highlands of the country. Investigations have focused principally on the periods from early 1st millennium B.C. to the early 1st millennium A.D. This age, in Eritrea, as in other parts of the northern Horn of Africa, featured the growth of sedentary settlements into fully-fledged urban centers.

Urban hinterlands appeared in much of the central highlands, evincing the construction of monumental architecture, the use and elaboration of bronze and iron metal work, and the eventual creation of a state that would dominate the Southern Red Sea, parts of the south Arabian Peninsula and substantial areas of the north-eastern Africa south of Egypt during the first half of the 1st millennium A.D.

Archaeological sites whose density and extent correspond to the 1st millennium B.C. and early to mid 1st millennium A.D. are particularly apparent in the central highlands of Eritrea, where a bounty of heritage falling in the realm is observable today as impressive surface remains of archaeological ruins and settlement bundles.

The archaeology of the central highlands of Eritrea featured since the 19th century due to the interest of past and current researches on the monumental centers and due to the Horn´s connection to other complex societies such as South Arabian civilizations, Meroe and the Roman and Byzantine Empires. It should be emphasized that the major socio-economic changes witnessed during the periods, including the development of intensive agricultural traditions, had enormous consequences for the ensuing development of the northern Horn as a key participant in the economies and politics of the Red Sea worlds during the periods.

The central highlands of Eritrea, like the highlands of the northern Horn of Africa, are positioned at the nexus of three major areas: eastern Africa, Nile Valley, north eastern Africa and south west Asia. The highlands were connected to the Red Sea via the Haddas and Komaile canyons of the eastern escarpment. The caravan routes running from the Gulf of Zula through the Haddas valley to the communities of Der´a-Hawatsu and through the Komaile valley to Matara have been important since ancient times. The position of the highlands along these major crossroads played a major role in the peopling and interaction of different cultural groups. The unique geographical attribute at the nexus of the above mentioned world areas had consequences for the development of the highlands as important centers for agro-pastoralism in Africa. The proximity and direct geographical linkages

to the Sahelian-like western lowlands, to the central and southern Ethiopian highlands and to south-west Asia are important to understand the origin of agriculture in this part of the Horn during antiquity. The geographical position thus helps comprehend ideas about the origin of agriculture in as much as understanding the origin of language groups and of cultural exchanges and trade contacts. The northern Horn´s role as a gateway between presumed points of origin for Afro-Asiatic and Nilo- Saharan language families and as a center of ancient trade routes are also important to consider when discussing the archaeology of central highlands of Eritrea.

The ancient settlements visible today in the archaeological record of the central highlands of Eritrea were located in relatively well-watered, agriculturally productive areas of the Eritrean highland plateau and the fertile soils in the area from just north of Adi Keyih to south of Senafe seem to have made the highlands ideal for human settlements throughout much of the last 3,000 years. The settlements contained both specialized religious and administrative centers as well as settlement areas, and despite limited archaeological research, the diversity in site size and function suggest a complex settlement system in central highlands of Eritrea and northern Tigray. Urban centers such as Matara and Qohaito as well as religious sites including Keskese, Hawelti-Melazo and Yeha, as a matter of fact, started to appear during this period.

Specialized craft production, sophisticated ceramic traditions, elaborate monumental and domestic architectural forms and writing are central features attested to the period. The rearrangement of settlements along an axis spreading across much of the central highlands of Eritrea to the Red Sea Coast ushered in a period of the cultural transformation preceding the rise of the commonly known Aksumite cultural period and the formation of the Aksumite state. A reference has been often made as “Pre-Aksumite“ and “Aksumite“ periods to the 1st millennium B.C. and 1st millennium A.D. respectively. This chronological assertion, whatever form it takes according to preferences of researchers interested in the archaeology of the Horn, constitutes important hallmarks of each period in the archaeological record of sites such as Matara, Keskese, Qohaito, Dera-Hawatsu, Adi-Gramaten and the like in the central highlands of Eritrea.

The evidence provides a rich source of data from which to develop understanding of cultural contacts and the development of complex urban administrative and religious centers in highland Eritrea during these periods. Consequently, the archaeological record contained in the archaeological sites of Qohaito, Matara, Keskese, Dera- Hawatsu, Adi-Gramaten and the like will be presented in the subsequent editions of Eritrea Profile under the column.

Eritrean Diaspora honoring our martyrs by fostering their families