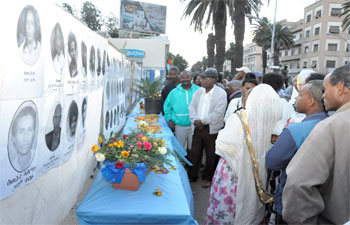 In May, Eritreans fly to reach the heights of happiness and delight by the wings of independence. In June, they are immersed in the sea of commemoration. Happiness is accompanied by remembrance and reverence. Exultation like inebriety is fading without a trace after temporary delight and fervor. June 20th is a special day in Eritrea, one which we set aside to remember our martyrs and renew our commitment to advance their dreams. Martyrs Day and Independence Day are symbolically and politically the most important – inseparable – national holidays of Eritrea.

Martyrdom is an expression of great love, a readiness to give every inch and everything you have. Martyrdom is a deliberate, conscious and sensible passing away to advance public good. Martyrdom is a supreme sacrifice with pride and consciousness made for truth and justice, for dignity and liberty. Napoleon Bonaparte draws a line that differentiates martyrdom from other deaths by saying, “It is the cause, not the death that makes the martyr.”

Martyrdom has become one of the values of Eritrean national identity. Eritrean national identity and independence demanded all kinds of sacrifice including opportunity, time, effort, and life. Martyrdom and Eritreanism are like a face and mirror where on the face of Eritreanism we can see martyrdom and on the mirror of martyrdom we see Eritreanism. The sacrifice paid by the people of Eritrea for its identity and dignity is unparalleled. In a struggle to bring and maintain independence Eritrea sacrificed over 85 thousand martyrs. Due to its small population, it is impossible to find a family in Eritrea that is free of martyrdom. The certificate of martyrs with their photos and short history hangs on a wall of almost every house in the country. Herbert M’Cleod, representative of the UNDP, expressed the phenomena well: “There is a big difference here compared with the rest of Africa . . . . People are much more interested in their country than in themselves. They all made sacrifices.” Martyrdom is the price of freedom. Quite unique in Africa, Eritrea as a free and sovereign country and Eritreanism as identity were acquired by heavy sacrifice and dedication of its own people, the Eritrean people. In the truest sense, freedom cannot be bestowed, it must be achieved. And we did it.

The death of our martyrs is unique and special in that they did it with informed choice, consciousness and tenaciousness to plant and cultivate Eritrean national unity and identity. Our martyrs celebrated eternal victory in a battle against enemies by spiritual power rather than military power. Honest and absolute love of country compelled them to accept death. The courage, strength, moral, faith and determination in adversity are the qualities of our martyrs that we struggled to enhance and embrace and make the foundation of our personality. Our martyrs had a firm belief that darkness is the source of light, despair is the source of happiness and martyrdom is the source of freedom. In the national anthem we find this verse:

Its archenemy was humiliated in defeat

And sacrifice compensated by liberation

Eritrea proves the old saying that says “the patriot’s blood is the seed of freedom’s tree.” Truly, our martyrs were nurtured by the love of our motherland. They made us proud and allowed us to stand high among nations. Each one of their sacrifices adds a new chapter to our national story. Every fallen hero of Eritrea stood firm until the last microsecond of their life. During the long and bitter decades of devotion, they remained resolute and proved that truth can win after all.

Tenacity can be understood as being on the same mind in the line of resistance without losing strength. Tenacity is the source of faith. In the absence of faith it is impossible to show determination and readiness to martyrdom. The faithful and the one that placed hope on its faith cannot face defeat. The jewel of our martyrs is faith; faith in the struggle, faith in posterity, faith in Eritrea’s identity. Our martyrs have passed away for public safety, national unity, national identity and dignity and, above all, for a prosperous Eritrea for all Eritreans. The combined effort of the genuine sacrifice of our martyrs, the popular leadership of the People’s Front and the gallant people of Eritrea fills the Eritrean national identity with meaning, purpose and unity. Now, the century of humiliation is fading into the distant past as Eritrea finds itself on the verge of development. The people of Eritrea have become masters of their own destiny and hold their future in their own hands.

The national heroes of Eritrea are all those who lost their lives in the struggle for winning and continuing independence. Among the first gifts of the EPLF to the people of Eritrea was independence that demands continuous vigilance and 65 thousand martyrs that deserve remembrance and honor. To indicate that independence was achieved by martyrs, the EPLF announced and prepared a certificate of heroism for every martyr and gave it to the families of martyrs. The certificate of heroism includes the full name and picture of the martyr, the date of recruitment, and the date and place of sacrifice. The People’s Front made no distinction between veteran and newly recruited, leader and rank and file, and called all of them martyrs. Through this act of recognition, the People’s Front constructed a statue of remembrance and inscribed the names of our martyrs upon the conscience of Eritreans. The People’s Front, as the leading political organization of Eritrea, came to power through the sacrifice of thousands of Eritreans and it knew very well that its existence and continuity depended solely on respecting the memory of the martyrs. Everything has to be done after honoring martyrs. The living are leaves hanging on freedom’s tree.

Forgetting martyrs would mean that you were a leaf without a tree.

The success of any country relies on the commitment of its leadership to develop a functioning and unifying national culture. The National Charter of Eritrea expressed the importance of culture and summarized it as follows:

“We must tirelessly strive to make Eritrea a country where culture can flourish…. Further, commemoration of our martyrs, as an expression of indebtedness and nationalism, should be considered an integral part of Eritrean culture and identity, and be passed from generation to generation.” (PFDJ National Charter, 1994)

Every year on June 20th, the people of Eritrea observe the Commemoration of Martyrs Day. As we remember those who gave up their lives for the sake of our nation, we are also reminded that no sacrifice is too great in the service of our motherland. Observance of Commemoration of Martyrs Day is also a gesture of respect and appreciation of the martyrs, and an expression of commitment that Eritrea stands by its people at all costs. The highest sacrifice to make for your country is to generously sacrifice your soul for your homeland, which is truly exemplified by our heroes in the armed struggle for independence (1961-1991) and during the Ethiopian invasion and occupation (1998-present). We are proud of them and we support them as they are our strong shield. Our martyrs gave their lives and wiped away tears from all faces forever. There is no material worth the sacrifices of our fallen martyrs other than working to build this nation for posterity. Let us ask ourselves: what would be the best way to honor our fallen valiant heroes and heroines? What about for those who have been orphaned or widowed or aged and lost their sons and daughters?

Our debt to the fallen heroic men and women of our country can never be repaid. They have earned our eternal gratitude. We will never forget their sacrifices. The people of Eritrea, despite the challenges, are striving to fulfill the aspirations of our martyrs. Those who sacrificed and were disadvantaged by the struggle must not be forgotten. Eritreans acknowledge that it is the collective responsibility of all Eritreans to care for the families and children of martyrs. Even the Diaspora hold regular meetings to discuss issues to support the martyrs. Faithfulness and commitment are our fortress. Eritreanism is an identity which at its core reflects sacrifice and martyrdom, and we can only continue by honoring our martyrs. Martin Luther King once said, “A man who won’t die for something is not fit to live.” He was right. An Eritrean who won’t die for Eritrea is not an Eritrean. Eritreanism is an identity gained at best by the readiness to die for it.

Pace of Communication Technology To Date