Martyrdom Does Not Mean Death 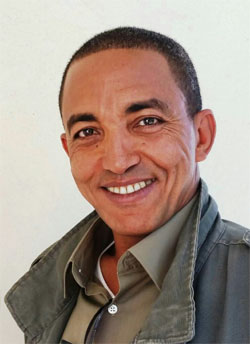 In 1986 I was severely injured and was hospitalized. I had a lot of spare time in my hands lying there almost half paralyzed; so I decided to put resonating words in ink, on paper. So from then up to now it has been some 30 years of poetry. Nevertheless the keenness for poetry started when I was way younger. I perfectly remember the first poem I ever recited; I was in 4th grade. But growing up I didn’t think of going to school for it; a hobby that I enjoyed vastly in my teenage days.

For the generations of the 1960s, 70’s and 80’s, hobbies and passions were some sort of unaffordable leisure activities. We had a common dream and passion and that was the freedom of our country. If I am to take you to my childhood I’d say it was probably the most animated part of my life. Due to our young age we knew little about the politics and meaning of independence but what we knew for sure was that we hated to be under oppression. While playing in the afternoon we would see someone shot dead, we would hear of strangled youth in city squares, we would notice how neighborhoods were by the day deserted as youngsters were either killed or left for the fields. So our shared dream was to be a Tegadalai. You will never believe me how many times we would go through life threatening trouble to get out of the capital’s borders and reach the closest units of freedom fighters. They always forced us to go back home, they refused to recruit us mainly because we were too young for it. And after many failed attempts I was finally old enough to be Tegadalai.

My many attempts of fleeing home and to be part of the revolutionary struggle were several. So my mother kept on high guards on rebellious young me. She tried to send me away from home to Massawa and other places just to keep me away from my friends… Nothing ever worked for her. I would still find a way to the fields, but then sadly be rejected by the freedom fighters because of my age. Any ways once enlisted, I saw my name was registered in the Bet Timhirti Sewra list. There was no way on earth that I was going to school. I wanted to fight. I snack away from the queue and joined the freedom fighters. They let me join… Well, it was not easy to convince them but I still made it.

So a couple of weeks after my mother heard about my whereabouts, she went through the same troubles I had gone through to reach the fields and be a freedom fighter, only that she was there to make sure I had made it safe. In the meanwhile two young compatriots and I had by then completed our training and became radio operators. So one day they called me and told me that my mother had come to visit me. I seriously couldn’t believe it, ‘why was she there?’ I felt wronged… and scared that she was going to take me back home, although I had my certainties that my new skill had by then made me useful for the liberation front. The freedom fighters humbly welcomed my mother, with the little food they had. I went to the bunker where she was resting, and she couldn’t believe her eyes at the sight of actually holding an AK47. We talked for a while and I asked her “When are you going back?” She must have been surprised at how fast I grew up.

From then until Independence Day I lost all contact with my family. Until one day a poem of mine entitled ‘Words of Your Son’ was aired on Radio Dimtsi Hafash and my brother in Asmara recorded it and sent a picture of my family with writings: “Words of Our Mom” in the back. It is interesting how the picture made its way to the fields. My brother sent it to EPLF branch offices in Europe and from there they sent it to me.

“I choose martyrdom to avoid death”. It is one of my favorite poems. There is a reason why many Eritrean youth glorify dying for our country and for our people. It is an altruistic act that you rarely see in other communities. Every one lives for his or her own. While in Eritrea people live and die for each other. The sole method through which Eritreans defeat death is by scarifying their lives for peace and stability of their people.

Although as a poet I did try to raise the significance of martyrdom I don’t think I have been able to fully explain it. And generally speaking none of the artists, writers, journalists, politicians… nobody has been able to describe Eritrean martyrdom in its core significance. We respect our martyrs and every Eritrean soul is not afraid to give life for peace, but who can explain this extraordinary innate thing of Eritreans?

Have you ever been able to explain a mother rejoicing in the martyrdom of her own child? “I waited for you in the door steps. I have my cane, I wait for you seated my weak and old legs won’t let me come out. And I waited for you to come in the way you left. I waited, I waited but you are not here. They told me you were left behind. Well done my child. It’s green because of you, it is warm because of you, and it is peace thanks to you. Well my child I think we have been far apart long enough, age has me, I’ll come to you, wait for me.” This is how an Eritrean mother grieves her child. Can you explain it?

Besides fighting enemies, freedom fighters had to also fight Nature. For years we lived outside. Like animals we took away the jungle from the wild animals. We lived in mountains as tall as 2Kms and more. We did our daily chores walking up and dawn these elevations. It is just unbelievable. And as young people living together we enjoyed coming up with names and nicknames for everyone and almost everything. Similarly, we named even our monstrous habitat, the mountains of Sahel… our homes with rocks rolling from top down every now and then. Every unit had different names and the locals called them their way.

A new name would be instigated by different occasions and events. The names we would give were extremely meaningful for us… Examples? They dearly meant something. There was ‘The Socialist Mount’ because it was short and fair for everyone to climb. ‘Mount Shell’ had the unit of logistics. ‘Mount Caribbean’ was just so beautiful and so green in the middle of the desert. ‘Mount Weini’ was dedicated to a beautiful young girl who died there. A group of freedom fighters were there to fetch water and she sadly was the last one to get up when an enormous rock came rolling and buried her. Nobody could move the rock, not even if all the units had gathered. And so she rests there until now.

I have neither fixed style nor techniques. I like to try out different styles. My themes normally revolve around martyrdom, freedom, liberation and so forth… I don’t sell my poems. I never wanted it to be the source of my income. I have one book, a collection of my war poems and essays. Those I wrote after Independence… I think I should publish them along with the essays. I have been collecting and translating many of them into English.