Pace of Communication Technology To Date 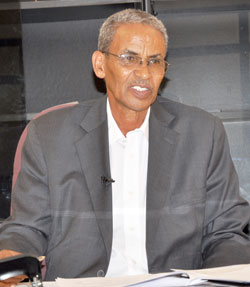 Disseminating information from one spot to another requires people to use today’s fast paced technology. Communication today is utilizing technology and transferring information. The exchange of information can be between people, people with devices as well as between devices. Smartphones nowadays are used as controlling devices connected with other electronic devices. Exchanging data via devices is also part of communication.

Information exchange via postal service, telephone line, short messaging service (SMS), and the internet are the ideal modes of communication. The authority in charge of this endeavor in Eritrea is the Ministry of Transportation and Communication (MoTC). The mission of the ministry is to deliver fair priced transport and communication services to the public.

Telephone communication historically is tied with the coming of the Italians to Eritrea. Following Eritrea’s independence it made some strides through steady maintenance until 2003. In the years that followed, telecommunication services improved dramatically and allowed people to enjoy mobile, land line as well as wireless telephone services anywhere they moved. Since early 2014, all of the telecommunication equipment and accessories have been replaced by new and modern machines which doubled the operational capacity.

By late 2016 more than 110 towers were mounted throughout the country to provide telephone services. Forty percent out of these towers operate using solar power. Since it is not practical to mount towers in the whole country because of the topography of some lands and costly copper wire, wireless telephone communication (CDMA) was preferred and introduced. Today there are around 22,101 CDMA clients. The CDMA telephone service is accessible and more efficient, because it only needs less towers and a radio installation in these towers. Then through the antenna people can use their wireless devices just like the other telephone line. Installation takes only ten days. Currently, the personnel at the Eritrean Telecommunication (Eritel) are able to install radios, adjust antennas and microwaves as well as maintain technical failures through the experience gained over the years.

Instituting mobile service enabled the number of mobile users to dramatically increase and reach 512,412 customers while the number of land line telephone customers is 42,307.

Geographically, telephone service covers from eighty to eighty five percent of the country, with some places not fully getting access on which the authorities are working actively to improve the situation. Places such as Mahmimet and its surrounding areas in north-eastern of Sahel are slated to get telephone service soon.

As the communication technology is growing rapidly catching up with it is a necessity. The ministry has a plan to upgrade the capacity from 3G to 4G and later to broadband, which demand huge capital investment. Minister of the MoTC, Mr. Tesfasillasie Brhane, said that Eritel responds to customers’ demands.

The minister added that the three types of telecommunication (landline, mobile and CDMA) are used according to the geography of places. Further, around 875 public telephones are set in the cities, where 473 function inside the central region and the rest are in the remaining five regions of the country.

Awareness of the society about telephone usage is rated as poor. According to Minister Tesfasillasie, people should use their telephones as a means of transferring relevant information instead of chatting aimlessly over the phone, thus instilling the habit of saving in people and helping the overall economy of the country. The minister further recommends SMS should be adopted by people to encourage the habit of saving and open the door for other operations through mobile phones; operations such as mobile banking and bill payments.

Apart from the mobile service provision, internet service is another endeavor the ministry has been engaged with since 2001. The internet service, which started in kilobytes per second, has now grown six hundred percent times to reach 300 megabyte per second. This simply explains the government is working passionately in all zones to make people advance with their communication. Minister Tesfasillasie believes investment is key to advance all of the communication services, particularly the internet. Internet service is needs an improvement and the ministry is working hard to advance it into a broadband system from satellite based service.

Communication technology generally requires collaboration as it is technically complex. The MoTC manages its work in partnership with different internal and external stakeholders and arms itself with the needed software, hardware, accessories and technical assistance when necessary. Regarding technology imports and how, why as well as which suppliers to choose depends on a fine organizational research. The ministry has recently been making arrangements to do infrastructural works across the country.

The impact of information these days is huge. Information is traded just like other commodities as it is necessary for people to accomplish their tasks. That is why the Ministry of Transportation and Communication is making efforts to upgrade its technology as in other parts of the world.