“I will Move Back and Buy 50 Chickens” 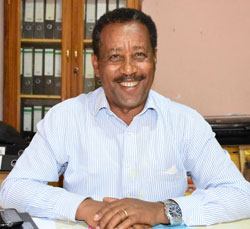 Eritrea’s policy of development focuses on increasing its production in agriculture and ensuring food security for its citizens. Agriculture covers both the cultivation of crops and raising of animals and animal feed production, a less known sector in Eritrea, is crucial for livestock development.

With about 80% of its population engaged in farming, ensuring food supply and production are key for the success of Eritrea’s development efforts. Mr. Teklu Ghebrehiwet understood it well when he decided to move back to Eritrea. “I used to tell my friends that, as soon as my country is free, I will buy 50 chickens and make a living out of it”, he said. With a strong educational and professional background in management of agricultural system and farming styles and strategies and postgraduate specialization in animal sciences and nutrition, Mr. Teklu didn’t hesitate a second to come back to Eritrea after living in the Netherlands for more than twenty years. After collecting years of professional experience in this field, primarily in South East Asia, he started working at the Ministry of Agriculture as a technical advisor in 1993. “My initial contract was for three years and then got extended to seven”, he said. By the end of his contract, Mr. Teklu decided to stay but this time by opening his own business within his specialized field.

Driven by passion and expertise amassed from his international experience, specifically on the South East Asian region, Mr. Teklu was finally ready to take upon a new journey by founding Dubarwa Animal Feed Factory.

His wife and two children came along with him from the Netherlands. “I was finally able to settle back in my hometown Dubarwa, where I spent my childhood and where my roots are”, he added. As the town is located close to the capital city and is connected easily with the rest of the country, Dubarwa Animal Feed Factory instantly attracted customers from every corner of Eritrea. Operations started in 2001 following a two-year feasibility study.

Many countries depend on big companies such as Cargill or Monsanto but Dubarwa Animal Feed Factory guarantees a “Made in Eritrea” products to its clients. Small to large scale farmers come to Mr. Teklu’s door to get best products to feed their livestock. The primary beneficiaries are located in the Anseba region followed by the Central region, the Gash Barka and Southern regions.

With twenty employees, nine of whom are women, the factory can produce up to 400 quintals of animal feed products per day for poultry farming, cattle, pigs and rabbits

depending on demands. “We used to produce only 136 quintal per day and it was enough”, the owner said. Clearly, the current inflation and the use of banking checkbooks, the current numbers of clients have decreased. However, the company works closely with the government and the livestock corporation in buying its raw materials.

“The customer is a king, that’s what we believe in”, the owner and general manager said. Providing the best products and services are key for this entrepreneur. The company provides house-to-house delivery nationwide. In terms of quality control, Mr. Teklu said that there are nutrition formulations which are important to follow as it impacts on the health and farming production. The job of the feed manufacturer consists of buying commodities and blending them in the feed mill according to the specifications outlined by the animal nutritionist. The company, thus, has two production lines using different raw materials in its formulation such as maize, sorghum, forage and other seeds beneficial for animal husbandry. The quality of the products of Mr. Teklu’s factory are monitored by regulators from the Ministry of Agriculture prior to going onto the market.

Dubarwa Animal Feed Factory is an example where natural products are used to feed animals in the country. Expanding its production and diversifying further its products particularly for rudiments are part of future plans. Mr. Teklu is expanding his factory in Dubarwa to continue serving his clients who come from all corners of the country. In doing so, he continues to be an example of realizing one’s dreams by coming back to the Motherland.