Of Sambusa, Mekhlil and Eid 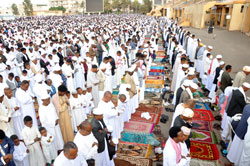 Ramadan is a Muslim religious observance that takes place during the ninth month of the Islamic calendar, believed to be the month in which the Qur’an began to be revealed.

The name Ramadan is believed to have derived from the source ramad, meaning heat or, more specifically, the intense heat of the sun. This most probably relates to the daytime fasting that Muslims are expected to perform during Ramadan.

In Islamic belief, Prophet Mohammed was spoken to by Allah on a date known as Laylat al- Qadr, or the Night of Power. Allah gave Mohammed the teachings of the Qur’an and set him on his path to becoming a prophet and the founder of the Islamic faith.

All Muslim sects believe that the Night of Power occurred during the month of Ramadan, although there is some disagreement as to the specific date. Still, the event is so much a cornerstone of Islam that the entire month is given over to its remembrance.

Ramadan is a time when Muslims are supposed to slow down from worldly affairs and focus on self reformation, spiritual cleansing and enlightenment, establishing a link between God Almighty and themselves by prayer, supplication, charity, good deeds, kindness and helping others.

When I was a kid, I used to love Ramadan, of all other similar fasting seasons that  belong to other religions, for during the month of Ramadan our daily supply of dates, pastry and other sweet meats was assured.

Saleh is a classmate and we Christian friends thought it was our inalienable right that he fed us with sambusa everyday. This resulted in creating strong bonds of unity between the followers of the two religions. For a while, we forgot our backgrounds and prejudices altogether.

When I look back, I feel that somehow we were unfair to Saleh because we never shared our food with him during our religious feasts or our fasting season.

When we were kids the month of Ramadan and the feast began each day at dawn, when the “white thread becomes distinct from the black thread”.

The air was filled with all kinds of sweet fragrances coming from Oriental pastries displayed in the streets. Frankly speaking for us Christians, Ramadan is a feast par excellence. A season of joy and fellowship of the followers of all religions, for during that holy month, Muslims and Christians in Eritrea ate and drank together in a spirit of unity untainted by religious or racial bias.

In fact, we were so much attracted to Ramadan that we even detested our Muslim friends who failed to observe the fast, not because we felt righteous indignation at their disobedience, but we didn’t want to miss friends like Saleh who brought us various Oriental pastries and invited us to their houses during Eid Al-Fitr. After all we were only kids and we thought and acted like kids.

The Asmara souk were busy with street vendors hawking their sweet scented merchandizes displayed on a long table for all to see and smell.

Feturek Yasaim! (Eat with healthy relish O thou who are fasting) they would shout. We enjoyed the show, the smell, the chanting from the nearby Mosque, the hustle and bustle of the people, bicycles, wheel barrows, taxi’s, etc. We toured the food sites with our small allowance, we bought some pastry and ate them on the spot, a practice unthinkable to our Moslem brothers; for they had to wait until a white thread became impossible to detect in the dusk.

When we were school children we always wondered how a person could abstain the whole day from food and drink. How about in the scorching sun of the lowlands? And imagine performing a heavy task at the same time in order to earn one’s living.

But the idea is to instill in the individual physical and spiritual discipline. Besides, it serves to remind the rich of the misfortunes of the poor and imparts on the believer a sense of solidarity and mutual care among Moslems of all social background.

After the final days of feasting, the holiday of breaking the fast, i.e. Eid al-fitr, begins, lasting, in some countries for three days.

How we longed to attain that day when we were kids. For Eid al-Fitr meant school was out for two days. They say that in Cairo it starts with a blast of a canon. A blast of simpler times, before most people owned a clock or watch and there were no loudspeakers or TV channels to announce maghrib.

Every Eid al-Fitr I had friends inviting me to their houses. And I always anticipated the joy and fellowship that the feast provided for one and all. It is the day of joy when people get together. It is a day of wedding feasts and for family gatherings, for visiting relatives and old friends.

But all this time I never learned to use the correct words meeting with my hosts. I went there to eat and thought more with my stomach than with my brain. Finally did I learn the words. They went like this: Kulu Amm Wo Antum Bikheir or even Eid Mebruk. These were the magic words that opened the cornucopia of fruits, dates, peanuts, biscuits, pantone, aba’ke, coffee with ginger, caramels, sweetmeats, popcorn, you name it you have it.

Three years ago…I was invited for the feast of Eid al-Fitr by Saleh. On my way to his house I met people going to mosques wearing their brand new Jelebias and some carrying praying mats. I saw a proud father with his sons who had already learned to perform their salat preceded by ablution. His sons were probably rewarded with ice-cream on their way back home.

Saleh was waiting outside his house; he was in his best Eid attire and greeted me with a beaming face. He led me to his house. His mother at the door seemed busy preparing a banquet, I was made to sit and was given aba’ke. The room was filled with a strong aroma from the burning Ud (sandalwood). Gradually, brothers, sisters, relatives and friends arrived one by one. When finally the father arrived, the banquet started which comprised chicken stew, mutton, rice, followed by all things pastry.

Outside, by the patio Sahel’s uncle took out a packet of cigarettes from his pocket and started to smoke with great relish. It was his first daytime smoke for a solid month.

Phone calls once in a while broke the lively conversations.

“That was Ahmed, a relative from Jeddah conveying his Eid al-Fitr greetings.”

Those who did not fast for a good reason (traveler and sick people) had to make up the days they missed at the later day. But on that day, together with those who observed the fast for the entire month, they were the happiest people on earth having sanctified the fourth pillar of Islam which is, by the way, known as Som which rhymes with the Tigrinya word Tsom.