From one Cow to Industrial Farming, the Journey of a Woman Entrepreneur 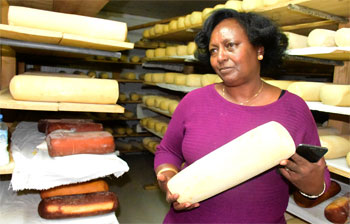 Women are often the main food producers in agriculture-related activities especially in the ‘Global South’. Research by the Food and Agriculture Organization of the United Nations (FAO) through participatory rural appraisal (PRA) shows that in Eritrea women work on average more than 15 hours a day during the cropping season (FAO 2016).

According to findings by the Ministry of Agriculture (2016) 16 to 24% of Eritrea’s GDP comes from the agricultural sector which is the main source of income for more than 60% of Eritrea’s society. Within this sector, the participation of women is high especially at the lower level in farming, livestock, and search for rural energy among other activities. However, at the high-level or managerial position; participation of women in agriculture continues to be low. For instance, within the bee farming cooperatives of the Central region; out of the 84 members only 6 are women. The long hours spent by women in agricultural-related activities plays a significant role in a household’s income; yet only few women upgrade themselves to large-scale productivity in Eritrea. The Eritrean Women in Agribusiness Association (EWAA), established in 2013, is currently working to narrow the gender gap with its 76 members engaging in different areas of agriculture.

One of those women entrepreneurs is Mrs. Azieb Tsegay, an illustration of the motto “hard-work pays off.” Azieb founded the Azieb Poultry farm in the outskirts of Dubarwa and over the years she has established a reputation for herself. In today’s edition, I will give you a glimpse of our conversation.

Azieb started her business with the idea of poultry farming and chicken meat production. From 2001 to 2007, her business focused on producing and selling eggs and chicken meat at the local market. Poultry farming wasn’t as satisfactory as Mrs. Azieb and her family had thought. The outbreak of the bird flu epidemic at a global scale which caused fear locally and high expenses in poultry feed and farming discouraged Azieb to pursue her original plan.

“In 2007, I bought two cows for our home consumption and quickly bought three more”, the owner said. She couldn’t keep up with the high amount of milk produced, averaging 15 liters per cow a day. “It was too much for private use so I started to make homemade cheese”, she added. From then on, Azieb slowly shifted her business from poultry to dairy farm and transformed her production capacity from homemade foodstuffs to small-scale industrial daily products.

Gaining in popularity for her fresh products, Azieb is willing to expand her business. Her son, Abraham, studied agriculture and broadened his know-how by pursuing his master’s degree in the Netherlands and by taking several courses in Italy and the Netherlands, specifically in dairy farming. “We wanted to make high quality products, and, we brought an expert from the Netherlands to teach us the job and give us advice on best practices”, Azieb said.

Shifting towards dairy production and expertise allowed this family business to grow through time. “It’s a family affair, everyone is passionate about the job and I couldn’t ask for more than having my son on our side to run the company”, she added.

Situated in the outskirts of the town of Dubarwa Azieb’s farm accommodates about 55 cattle and about 67 calvesare growing up with 17 others in Dogoli. Each day, her cattle produce a total of 700 liters of milk and the rest is bought from milk producing cooperatives located in Mendefera, Dekemhare and Dubarwa. The important amount of cattle requires a high amount of animal feed products where an impressive warehouse was built up for storage. As I continued walking around the factory, I saw high quality machineries and enforcement of sanitation rules prior to entering any rooms. Her employees where busy working in the yogurt production department. “When it comes to yogurt, the production line applies strict rules to keep the products for a maximum of two weeks.

While we continued our conversation, I noticed this immense compartment and freezers where chees and milk are stored. “We accept any amount, be it big or small as we have the appropriate infrastructure for storing”, the founder said. Azieb Company produces mozzarella, ricotta, butter, provolone cheese, semi-hard with a firm texture and mild, smoky flavor; fontina cheese, a semi-soft cow cheese; grana, a hard and mature cheese; cream cheese, yogurt and also the traditional clarified herbedbutter locally known as tesmi flavored with onion, garlic and ginger. As a result, the amount of milk needed remain significant and on average the industry receives about 1500 liters of milk per day and during the fasting season, when many people do not consume dairy products, Azieb receives up to 4000liters of milk per day. As the milk comes directly from the cooperatives of milk producers, it goes through strict quality control mechanism under the loop of the Ministry of Agriculture.

With rising demand for her fresh products, Azieb opened up a shop in the market area of Asmara close to Independence Avenue. Her son is in charge of the marketing and winning

bids as superior to Bisha and Zara Mining companies, big hotels such as Asmara Palace Hotel and pizzerias around town. Many individual customers also choose Azieb’s products for wedding or other events.

As we took the time to sip a tea while enjoying tasting some of Azieb’s cheeses, I noticed an area for employees only. She explained to me that there are 16 staff, including 4, women who stay on site. The work requires waking up at night; hence, accommodating workers was the best solution. The dairy farm created jobs for the local communities. “There is a cook and cleaners and they have a common area where they have their daily coffee time together”, she added.

Azieb also built her own home by the factory. “It’s not just a common 8 to 5 job but a life-long commitment, and I have to be present at all times, waking up with my employees”, the entrepreneur said.

Starting with just two cows and aiming big allows this woman entrepreneur to set an example to others on how commitment and hard work in addition to strong family ties in business leads to success. Azieb’s business did not go unnoticed and is often visited by Minister of Agriculture and members of EWAA. The company will be expanding and bring more machineries to move towards a large-scale and highly developed factory able to serve the whole nation.