“Do you really think women can hold managerial position?”… The Strive against Occupational Discrimination 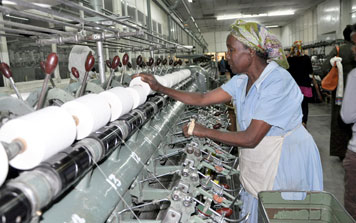 Women played a tremendous role in bringing independence and peace to Eritrea by fighting along their male counterparts. Efforts to promote gender equality have been underway through policies calling for equal opportunities in terms of access to health care, education, work, land ownership, etc.

In practice, however, women and girls continue to face numerous challenges due to cultural beliefs and practices. Accordingly, under the theme “Development of Eritrean Women in a Quarter of a Century (1991-2016)”, the National Union of Eritrean Women (NUEW) held a symposium at Arag Conference Hall, NUEW’s head office in Asmara, on June 29-30, 2017, aimed at sharing, debating, assessing and disseminating the achievements, challenges and opportunities of Eritrean women in the last 25 years and way forward. Despite the short timespan given in preparing their research papers, the presenters were able to present great work. They managed to bring out facts and forward recommendations on the role of women.

One specific topic interested me in particular: the role of women in the workplace and the discrimination women continue to face in the country. This fascinating subject was lively and urged the audience to discuss and think of future solutions. Mr. Hagos Mebrahtu, Head of Employment Department at the Ministry of Labor and Human Welfare (MoLHW), gave an extensive presentation on a topic entitled Growth and Development of Women in the World of Work. Another presentation by Mrs. Zeferwork Fessehaye on Friday titled, Eritrean Women in Development (1991-2016): Opportunities and Challenges in Trade and Industrial Sector complemented Hagos’s paper. Today’s article will focus on women at work as this subject intrigued me and should concern all layers of society.

Hagos firstly highlighted that by law there should be no discrimination based on gender, religion or ethnicity but within the Eritrean culture, gender-based stereotypes and discrimination persist.

Indeed, I noticed in most of the presentations, the presenters, women or men, stated that “women are naturally more sensitive, good listener and more compassionate than men”. That in itself is a social construction shaping girls’ and boys’ role and behavior from young age. I even had discussion with female colleagues, journalists, who take this

statement as a natural fact. This social construction putting women in a certain category and men in another is actually a return to backward belief.

Interestingly, Hagos said that two worlds were formed for women in Eritrea: one during the armed struggle in which equality of women to men wasn’t a question of debate and the second world, created after independence, where the traditional role of gender made a comeback.

In his presentation, Hagos spoke about disabled women and how they have to carry two disabilities, i.e. being a woman and having a disability. This specific comment was contested by one of the participants, Mrs. Halima Mohammed, from the Ministry of Education. Halima said that “being a woman is not a weakness but a strength that many won’t understand”. Indeed, the perception of a woman, first, as a sensitive person and, second, as one with a disability is something that the society needs to work on. Nevertheless, the debate here is about Eritrean woman at work in today’s Eritrea. This particular topic was sensitive and made clear how much work remains to be done.

According to the World Economic Forum (WEF), “It will be 118 years before women have the same career prospects as men” (WEF 2016). Besides, most female workers are still excluded from managerial positions, are underpaid and overlooked, as stated in the WEF report. In addition, the ILO-Gallup report 2016, shows that the majority of women are willing to work in any paid jobs as the survey conducted in 142 countries illustrated. But, women’ willingness to work is not translated into today’s global labor force.

In Eritrea, as stated in Zeferwork’s findings, women constitute 55% of the total population and 47% of the total number of employees of medium and large scale enterprises. However, the number differs according to the salary range. In fact, women count for 71.61% of employees earning between 400-700 Nakfa whereas in the wage ranging between 2,001 and 3,000 Nakfa, the majority 78.90%, are male workers and those earning 3,001-4,000 Nakfa are men making up 75% of the workforce (MTI 2016). Clearly, while women dominate in low paid occupation, the number dwindles as the income increases.

This gender imbalance among the high income bracket was also highlighted in Hagos’s presentation in which he explained that there is an occupational discrimination based on cultural beliefs that need special focus. The occupational discrimination, despite equal rights to work, often confines women to lower position and this can be seen in ministries, schools and other companies. Several reasons may cause the situation.  One is early marriage which accounts for 20% of women (EPHS 2010). Childbearing and rearing, lack of mother-child service at enterprise level or women’s low level of education are also possible causes. In recent years, there have been some change in education sector with women making up more than 50% of graduates from higher education. But women are still given less chance to pursue higher education especially at master’s degree level. For instance, under the Ministry of Agriculture, only 140 women compared to 1,550 men were given the opportunity for training abroad and only 5 women were given an opportunity to study for their master’s compared to 130 men.

Within the educational sector for instance, numbers are also alarming with female teachers in pre-primary schools amounting to 1,300 and men close to zero whereas at higher level of teaching the trend shifts tremendously with 80% of male teachers at secondary schools compared to only 20% women or 641 nationwide (MOE 2013-2014). Indeed, according to the MoLHW’s findings of 2006, Eritrean women account for 15.9% legislators, senior officials and management positions compared to 59.5% at clerk post. In addition to these, the informal sector such as selling goods and foodstuffs on the streets continue to be dominated by women.

Despite having three women Ministers in Eritrea, at director general, director and unit head, women are almost nonexistent. Similarly, in schools, the number of women as director of schools remain close to zero. Hence, this assessment of the last 25 years comes at a critical juncture to allow the country to fulfill its obligation and achieve its target for the 2030 Sustainable Development Goal (SDG) 5 to achieve gender equality and empower all women and girls. This discrimination in the workforce will need further efforts starting from the Ministry of Information. In fact, the Ministry remains to be male dominated in key positions with almost no women as head of unit, none at director positions whereas secretary positions are filled by women.

This critical topic area includes all ministries, companies and civil society groups as the situation of women at work remains similar nationwide. Improvement in this area requires willingness by policymakers and education and awareness campaigns. “Do you really think women can hold a managerial position?” This is a question I was asked by a young educated woman yesterday and this type of question illustrates how society shapes one’s mind to think in a certain way. “If we don’t work to make culture profitable for us all, then we won’t see any changes”, said Hagos at the end of his presentation. While most of the work needs to be done in changing cultural beliefs and remove this gap in occupations, policymakers, on their part, are required to show goodwill by enacting laws securing, protecting and providing social services such as daycare in all institutions and longer maternity leave for women in the workforce.

Eritrea is now entering a new phase of development where gender role shouldn’t be an obstacle to its achievements. The initiative by the NUEW to bring all stakeholders under one roof and share gender-related issues came at a critical juncture and as often said “gender equality is not a woman’s issue, it’s a human issue. It affects us all”. Let’s close with Zeferwork’s recommendation that “stakeholders must be aware that women’s economic empowerment is not only a key challenge for women but a development concern for the society as a whole”.

Beyond the Conventional Wisdom of Development