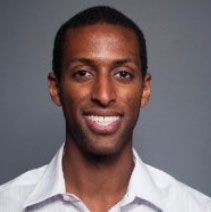 I didn’t originally start out in software; in fact in college I majored in mechanical engineering. Programming was always more of a side hobby for me. I wasn’t until my first year after graduation that I seriously considered turning my hobby into a profession. After a year as a website engineer, I went to graduate school to study robotics. Besides coding, I enjoy running, hiking, and watching way too many movies.

It’s great that you asked, because I recently completed a master’s degree on the topic! Most of my school projects involved writing code for robotic applications. Robotics is an interesting subject because it combines both hardware and software to create an autonomous machine. Some common examples include drones, self-driving cars, Roombas, and automated welders and so on. The problem can be incredibly hard and has only recently moved from the research phase to commercial reality. For instance, a single car-maker might employ hundreds of people to develop a relatively basic autonomous driving system. In addition to roboticists, you might need electrical engineers, controls engineers, computer vision experts, embedded programmers, mechanical designers, machine learning experts, PCB designers, RF engineers, testers, and all sorts of specialists depending on the size of the project.

At the core of robotics lies the algorithms used to give the machine artificial intelligence, or AI. This is typically what a roboticist studies. These algorithms help the robot navigate new environments, make decisions and coordinate with other robots, all without human intervention. Right now, there is a lot of interesting work being done with neural networks to make robots more “human like”.

Robotics has a few niche applications that can be useful to developing countries like Eritrea. One killer app is the use of drones to deliver medicines and other critical supplies to remote areas. Here, the drone can be used to bypass difficult terrain and deliver small packages in a timely fashion. Since the last time I checked, two different startups were working on this idea, Zipline and Vayu. Zipline has already conducted successful trials in Rwanda, a remarkable achievement.

Another interesting application is Project Loon, a moonshot program being developed by Google X. The main idea is to use high altitude balloons to beam the internet into remote locations. Computers on the balloons help them navigate and loiter over a particular region (essentially an unpowered drone). Transceivers on the balloons beam data between small ground antennas in remote villages and larger base stations that are connected to the internet backbone. Satellite internet already operates in a similar fashion, but is much more expensive and limited. Project Loon has already been tested in a number of countries, including Indonesia and parts of South America.

Finally, there are a number of remarkable technologies that are not related to robotics but will nevertheless help improve lives. One major example is the use of mobile phones for health initiatives such as agriculture, banking and education. According to the World Health Organization, “The penetration of mobile phone networks in many low- and middle-income countries surpasses other infrastructure such as paved roads and electricity, and dwarfs fixed Internet deployment”. In countries with limited physical infrastructure, mobile phones are a critical tool to provide basic services, often over SMS. Another example is solar panels, although it is not a new technology, in recent years the price of a panel has fallen tremendously as global production has ramped up. This, coupled with other renewable energy sources, will allow even the poorest and most remote villages to afford basic electricity. Renewables are especially helpful in developing countries, because they are often the most vulnerable to spikes in global energy prices (i.e. imported oil and coal). A third example is 3D printers, which are typically used to quickly prototype small plastic parts. In poorer countries the kill app is 3D printing custom-fitted prosthetics. Traditionally, prosthetics were either poorly attached with a series of belts and straps, or custom molded and cost thousands of dollars. The new process is both cheaper and faster than existing methods.

Right now, I just want to improve my programming skills and hopefully work on a few robotics related projects. In July, I will start to work at Google as a Software Engineer. The project I will be working on is still to be determined, but I am excited to join such a large and well renowned institution. Furthermore, I will focus on developing both my technical and professional skills. In addition, I will take advantage of their extensive mentorship network to gain more from my experienced colleagues. Finally, I want to have some fun over the weekends and learn the guitar!