And the narrative of achievements goes on! 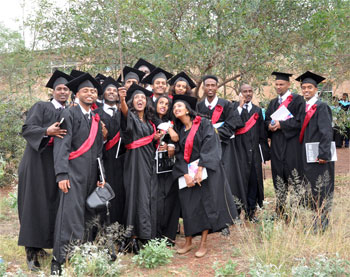 On the early hours of Wednesday the 6th July, the roads of Asmara to Mai Nefhi were clogged up with traffic jam. Well, again, not an extraordinary scene for this specific time of the year because it is the season of commencements. It is in this beautiful chilly begging of the rainy season that Eritrean colleges send off their young ones to the world of professionalism. The Eritrean community celebrates the welcoming of new assisting hands and fresh minds with zeal.

Thousands of vehicles, carrying friends and family of the graduates, slowly dashed through the roads towards EIT, the institute of technology. Once everyone was seated and ready to welcome the newly graduates, then the music started: saxophones, trumpets and drums… a celebration of the 2017 praiseworthy young educated heroes.

Also, a surprise visit to the students by the villagers of May Nefhi area. Elders wearing traditional garments, fathers swinging their swords expressing their pride and mothers and some young boys and girls came waving the Eritrean flag and congratulatory banners; ‘we are proud of you’ posters. Topping the surprise visit, making it even more excitingly emotional, was the mandatory ever beautiful cheers of our mothers… they simply do it right. Tossing flowers and popcorn, pulsating their hands on their chest! And what not to expect from these amazing human beings? They baked gogo, the traditional Tigrigna bread, with an engraving of the EIT emblem in the middle. Gogo is the traditional brown bread made of barley, it is believed it straightens up the back bone. The bread is presented after hard days of work during farming and harvesting. It is a traditional sign mothers bestow to hail a job well done.

After a minute of silence of tribute to the fallen heroes who made and continue to make a peaceful Eritrea possible, the ceremony officially began in the presence of Ministers, PFDJ officials, Zoba Administrators, Ambassadors, Religious Leaders, Members of the National Commission of Higher Education, Deans of Institutions of Higher Education, parents, family and friends of the graduates and least but not least the graduating class of 2017.

The day was a special one for the institute as on the 6th of July EIT observed its 10th anniversary. Being one of the first institutes of higher education established in Eritrea as part of the national project of expanding educational access to all, while responding to the growing number of college students, the EIT has in these past 10 years graduated 13571 students; and this year 4663 students move their tassel from right to left!

In his speech, Professor Gebrihiwet Medhanie Vice President of EIT, explained prior to the valediction of the students that the “institute is striving to meet the needs of the country by upgrading and improving the activities of the three colleges of Education, Engineering and Technology and Science, which are housed, all encompassed in the Eritrean Institute Technology. Under these colleges there are 23 departments and the ICT and Tele- Education Center which enable students become beneficiaries of a broad access to education.” He went on to express that the Institute is now to embark a new era on to a promoted level as: “Currently the Institute is in the verge of drastic changes both in its infrastructure and teaching facilities. The infrastructure changes are observable, both in the College of Science and College of Engineering. The College of Science will move to a well-furnished new modern building complex in the coming academic year. This new complex has all the basic facilities including conference and lecture halls equipped with multi-media systems, libraries containing both digital and book circulation sections with study rooms.” The professor went on to describe that the new building contains 24 laboratories and other facilities that certainly attest to the growing interest of students in education and the government’s willingness to respond. The professor reminded the students that education means change in attitude and also an aptitude to live up to the people’s expectations.

One of the main problems of the institute and the Ministry of Education in general as disclosed in the graduation event is shortage of qualified faculty. The government has heavily depended on foreign professors but hiring and developing Eritrean professors is the way forward. Indeed, to tackle the issue the People and Government of Eritrea sends students abroad for Masters’ and PhDs.

This academic year in fact five Eritrean staff members returned after getting their PhD’s. Moreover to address the shortage by augmenting human resources the institute has

recently opened postgraduate studies in different fields of specializations. In the College of Science there are, in fact, five departments offering Master’s Degree in Biology, Chemistry, Mathematics, Physics and Statistics. It was also disclosed during the event that the department of Earth Science is shortly to start an M.SC program in the field of Geophysics. More post graduate programs are set to begin in the coming academic year in Educational Administration, Educational Psychology and English Language Teaching.

Next on the schedule for the morning of the 10th commencement of the Eritrean Institute of Technology was the award giving; the graduates were called to get their certificates from department heads, deans and members of the commission of higher institutions. Amongst this year’s graduates 34 graduated with Masters.

To conclude the ceremony with a touch of the graduate’s hand, towards the end of the program, songs were presented by the graduates themselves. When participants and graduates left the hall for pictures, the Institute’s yard was literary full with smiles ready for a ‘selfie-cheese!’

Several partners do join hand in the implantation of the Eritrean educational endeavor: the Government of China, Finnish Government and Finnish Church, Eritreans in the diaspora and many other Universities of the world. The joint venture of the Government and People of Eritrea and stakeholders thrives beautifully as once again thousands of students from all colleges spread nationwide.

In its 25 years rather short and hard period of independence the Nation of Eritrea has adamantly marched towards development setting eyes on the principles of equality and respect to one another. The Eritrean people within its differences joins hands to produce educated generations. Making education free at all levels for every citizen is surely not an easy task. The success of these students goes out the people who aspire and sacrifice for a stable nation toiling to make sure that the narrative of war and labor force ends with them, while the narrative of development, education, peace, stability and prosperity goes on and on with the younger ones. Congratulations EIT!

FT the brand of the people