Celebrating the Zenith of African Solidarity 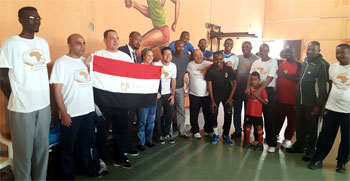 Africa Day, formerly known as African Freedom Day and African Liberation Day; is the annual commemoration of the foundation of the Organisation of African Unity (OAU) (now known as the African Union) on May 25, 1963. It is celebrated in various countries on the African continent as well as around the world.

What began on 25 May 1963 as a day marking the foundation of the OAU, Africa Day has evolved into a platform for creating awareness about all things Africa, in Africa and around the world.

Each year on May 25, the continent celebrates Africa Day in various ways. In Zimbabwe, May 25 is a public holiday, in Senegal’s Goree Island, which was a slave port, a new movement dubbed “Africans Rising” is being launched to reclaim peace, dignity and justice for Africans on the continent and in the Diaspora.

Elsewhere, concerts and ceremonies are held to mark the day. Africa Day is also celebrated by Africans abroad as Diaspora communities of different nationalities come together in cultural attires and swap traditional dishes.

In Eritrea Africa day was celebrated from July 1st to 3rd 2017.

The sounds and tastes of nations ranging from Egypt to South Africa were on offer on Saturday.

The annual Africa Day which was celebrated in Eritrea in 2015, was a one-day event. As a result of its successful 1st ever African day merriment, African embassies found in Eritrea in accordance with the Foreign Affairs of the State of Eritrea as well as with the Commission of Culture and sports have been hosting the event come each year. This year’s celebrations were the third installment. The celebrations were planned, just like the previous year, to host different events. Sports, documentary films, photo exhibition and a gala dinner were all order of the week.

As preparations were finalized by the organizing committee, the commemoration began in the morning of Saturday July 1st with very competitive football matches. Each African Embassy in Eritrea was represented by one team and the competition saw the participation of six teams, drawn against each other. In what was a day of friendly foot-ball kick about, the commission of Culture and Sports men were as the winners of the “Africa week” sport day. In a day of spirited competitions what triumphed biggest at the end of the day was a sense of harmony, and camaraderie created on the pitch. For the organizing committee, checklist number one was successfully crossed out! Next, Movie night at Cinema Asmara!

Africa week was planned in a way that could involve every African Embassy in Eritrea to come together in a cultural, artistic and fan way, in order to achieve the desired effect of

sentiment of Africanism. There is no continent more blessed with striking natural beauty and diversity than the African Motherland. It was this physical and genetic diversity that allowed Africans to parent the rest of humanity. Indigenous Africa is testimony to the full spectrum of skin tones, hair textures, and rich religious and cultural practices. Though the second largest continent Africa is home to 1,022,234,000 people. There are an estimated 3000 tribes in Africa and each consisting of their own unique culture, religion, history and fashion. Great ancient Kingdoms and empires are known to this area. Egypt, an ancient land of Pharaohs, Pyramids architectural genius and skill. Sub – Saharan Africa is the birthplace of Mankind. The inhabitants of Sub-Saharan Africa are black, which is why it’s normally referred to as “Black Africa”. In sub Saharan Africa are hundreds of Tribes and on the land once ruled Great civilizations and Kingdoms. Descendants of Mama Africa are now spread worldwide. Scattered around Sub-Saharan Africa are Bantu-sent tribes all consisting of Darker skin peoples. The tribes have Bantu-sent tongues and all consist of similar culture/practices. The land is blessed in abundance with natural beauty and wealth. Plains, Rain forests and Deserts are natural ecosystems/landscapes in the area. The Masai are normally tall and thin while the Yoruba of Nigeria are normally much larger. The Himba of Namibia are light skinned. All these different looks are attributed to different tribes/areas of Africa. All Africa possesses the natural beauty of its land and the physical beauty of its people. That’s what makes us identify, our love for each other and our love for our land. All of us together celebrating our continent, a continent where it all began, a continent ravaged by colonialism and the devastating effects it left, a continent rich with natural resources and cultural diversity, simply a continent worth celebrating.

Screening night at Cinema Asmara, which was open to the public, was edifying in its content, with each African embassy contributing what they considered was the right promotional videos of their countries. The documentary films which were quite invigorating, spoke a million folds of words, from Egyptian Pyramids, South Sudan is biggest Swamps, Sudan’s Black Pharos to Libya’s immaculate architecture. Small, yet big, parts of Africa were immortalized on the big white screen of Cinema Asmara.

Next on the itinerary, more sport activities! Sunday July 2nd saw a Volley-Ball match in the morning and table tennis and chess games in the afternoon.

After a busy weekend, the third and final day of the celebrations were capped off with a Photo exhibition at Club Sudan. Monday 3rd July 2017, put two hours of hard labor were put to turn the insides of Club Sudan into a photo gallery that would break par with that of London’s Hamilton’s Gallery. The white tents of the venue were decorated with Pictures, Photographs, paintings, fliers, travel guides, banners and the first of its kind, cultural delicious cuisines from each African Embassy found in Eritrea, which gave the event a certain je ne sais quoi.

Photography is a staple of everyday life. It’s the kind of imagery that stops us dead in our tracks and causes us to reflect on life. Such was the case with African Photography and paintings put on display on that day. Add to it African cultural Cuisine such as Egypt’s Kushari, Sudan’s Stews, South Africa’s peanuts & Chakalaka relish, Libya’s Cuscus, South Sudan’s Kisra and Djibouti’s Skoudehkaris, you have an event that would last long into the memory of the mind and taste buds of the tongue. Africa Week celebrations was once again a hit!

FT the brand of the people