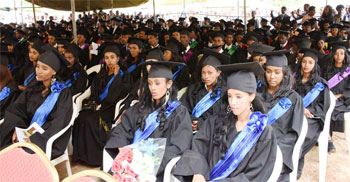 The Hamelmalo College of Agriculture graduated 440 students out of which 50% females in degree and diploma.

Asmara, 10 July 2017- The Hamelmalo College of Agriculture graduated 440 students out of which 50% females in degree and diploma.

236 of the students graduated with degree and 204 with diploma in the fields of Agricultural Economics, Agricultural Engineering, Horticulture, Agronomy, Land Resources and Environment, Animal Science and Veterinary Science.

Speaking at the event that took place on 8 July, Mr. Semere Amlesom, Dean of the college, stated that the 10th commencement of the graduation attests to the fact that tremendous achievements have been registered in the college since its establishment.

Mr. Semere also said that, the college is significantly contributing in producing professionals that will ultimately play a significant

Mr. Semere further called on the graduates make good use of the infrastructure already put in place and play active role in the effort being exerted to ensure food security.
Speaking at the event, Mr. Arefaine Berhe, Minister of Agriculture, congratulating the students and parents as well as the college called on the graduates to live up to the nation’s expectations.

The Hamelmalo College of Agriculture has so far graduated 43 students in Masters, 1,742 in first Degree and 2,050 students in Diploma since its inception in 2008.