Asmara in the World Heritage List: Between the Realities of Nomination and Beyond 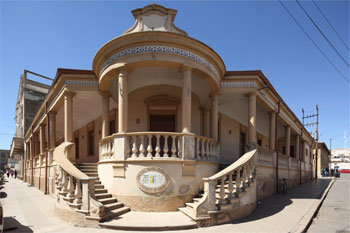 Throughout the world, there are cultural and natural heritage sites that are considered to have special importance to humankind. Among these sites, some are considered to be of outstanding value to humanity. A site becomes a World Heritage site when it is inscribed onto the United Nations Educational, Scientific and Cultural Organization’s (UNESCO) World Heritage List for its outstanding universal value.

The Outstanding universal value means a cultural and/or natural significance which is so exceptional as to transcend national boundaries and become commonly important for present and future generations of all humanity.

July 8, 2017 will be remembered as a historic day in the Eritrean Calendar as the city of Asmara was inscribed on the World Heritage List following a decision by the 41st meeting of the World Heritage Committee. News beamed from Krakow, Poland, created euphoric moments among Eritreans. With the decision Asmara has joined the likes of the Old City of Hebron in the World Heritage List, UNESCO´s inventory celebrating world´s unique testimony of human creative genius embraced in cultural heritages. The task of inscribing heritage sites has long become a crusade for many countries in the World as the technicalities and decisions of the World Heritage Committee often reflected disparities and, sometimes, cultural prejudices. Italy, France and Spain, for instance, have more sites than the whole of Africa.

Three years and a half passed preparing the Nomination Dossier for the Asmara Heritage Property and almost a year elapsed in the course of the evaluation process, to arrive at its final inscription. The inscription of Asmara as “Africa´s modernist city” in the World Heritage List further needs understanding of the Property in context of UNESCO´s criteria and humanity´s cherished values of heritage.

The built environment, to use the lexicon from ICOMOS, encompasses groups of separate or connected buildings which, because of their architecture, their homogeneity or their place in the landscape, are of outstanding universal value from the point of view of history, art or science.

Modern thinkers, from Nietzsche to Benjamin, Heidegger and Cesare Brandi have referred to the idea that – instead of a mimesis (i.e. imitation of nature) – works of art are produced through a creative process, which gives specificity to each object. Asmara was ideal blank canvas by the turn of the 19th century on which Italian architects could practice and realize these modern ideals in instilling global encounters with modernity.

The physical and social context of Asmara is phenomologically unmatched in the world. Nowhere are there such a large number of buildings designed and built in Modernist style in a single urban context. Nowhere does a complete colonial urban master plan from the early twentieth century still exists without alteration in the twenty-first century. Nowhere in Africa has a country actively sought to maintain, conserve and adapt a colonial legacy due to the value of its components and the charm of its wholeness.

In the early twentieth century, Asmara represented little more than a tiny highland village, which grew incrementally to become a well-established town by the 1920s and 1930s. The fast transformation of Asmara from a relatively minor town into Africa’s most modern and sophisticated city at that time overlapped with equally momentous events in the world of design and architecture, which involved the global proliferation of Modernism and its various forms, including Futurism, Rationalism, Novecento, and Art Deco. The spirit of the new age of travel and adventure was embodied in these architectural forms. From 1935 to 1941, thousands of buildings were constructed in the city, most of which reflect various Modernist styles and some of which represent unique architectural forms celebrating technological innovations of the age. In a nutshell, the spectrum of architectural ensembles encapsulated phases of development in styles ushered by the Neo-classic ideas in the 1920s and the Futurist perspectives by the 1930s. The architectural heritage of Asmara represents the highest concentration of Modernist architecture anywhere in the world. Nowhere else is there a city comprised almost entirely of Modernist buildings constructed in the 1930s, with so little subsequent development to detract from the original urban plan, and so many examples of genuine Modernist buildings in their original state.

The planning and design of a complete urban layout based on racially prejudiced principles and the segregation of urban spaces according to function and ethnicity is a uniquely colonial model, adapted by the Italians for this particular circumstance. The complete preservation of this physical model is unique and provides an opportunity for experts to observe firsthand the results of urban planners and the endeavor of colonial architects during the early twentieth century.

However, despite odious political and economic motivation of its creators, Asmara has evolved into an extraordinary functional and pleasant urban environment encompassing old age traditions with modern amenities over the centuries. The rise of modernism and its global dissemination coupled with the conceptual and material zenith might be considered the central facets of European colonialism.

Yet, the tendency to manifest exploitative processes and western values in the guise of the built environment are only partial interpretations as far as global encounters with modernity are concerned. Asmara presents the setting to understand the convergence of western values and non-western experiences in a uniquely African context. The resonant triumph of this reality can be summed up in Asmara’s sprit of a place, with myriad experiences of maintaining modern amenities with the old-age traditions of peaceful co-existence of its inhabitants. This remarkable intangible heritage enshrined in the unparalleled uniqueness of the city’s tangible heritage create an urban reality that demands conservation for the sake of preserving exemplary contemporary urban features rather than superficial melancholic references. Life has populated the built environment and unlike in many instances, modernism has not withered the amenities constituted in the Asmara landscape.

The blend of an internationally outstanding architectural movement, a cultural environment unique in Africa and the world, and a geographic setting that has supported human habitation for thousands of years, provides an incomparable setting that has become a haven for a unique urban environment. The city today represents a living museum reflecting one of the most important design movements in recent centuries. Modernism has subsequently altered profoundly almost every built environment in the world.

Asmara´s unique urban heritage was ironically protected since the 1940s till independence as no major construction took place during those years. The period was marked by the strong sentiment of Eritreans to own their capital amid the long struggle for independence and the city became the hallmark of pride after the liberation of the country from colonization.

The commitment by the Eritrean government to preserve and rehabilitate the Asmara Historic Perimeter initially took shape in the form of activities by the Cultural Assets Rehabilitation Project and recently under the auspices of the Asmara Heritage Project. The latter’s efforts culminated in the production of a Nomination Dossier for the property that combined a phenomenal job of multi-disciplinary encounter. The dossier has been awarded prestigious RIBA recognitions and subsequently the highest accolade in the form of the inscription of the Asmara Heritage in the World Heritage List. While the tremendous work accomplished along these lines should be hailed as a landmark in the Eritrean experience, the Inscription in the World Heritage List further assigns a responsibility on Eritreans and the entire humanity to conserve and preserve Asmara´s modernist architecture in the future. The implementation of the Conservation Master Plan developed for the Asmara Heritage Property will be as significant as its Nomination in the World Heritage List. Consequently, the harnessing of resources and training of local conservators and restorers shall be envisaged in the future as no one else would better realize the spirit of the city than Eritreans. The spirit of Africa´s modernist city shall resonate across the World to cherish the convergence of modernist amenities with a uniquely African experience for eternity. Long live Asmara and the spirit of Asmarinos!

Eritrea’s Victory in the Battle of Diplomacy