“The Mistake is that we don’t appreciate Eritrean Made Products” 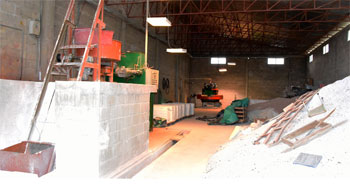 “At independence, I wanted to do something by myself in my hometown”, said Samuel Menghsteab, a father of six and owner of Dembe Menghsteab (DM) Factory located in Dekemhare. With hard work and determination, this former freedom fighter managed to start his factory in his native town. At home, his family parcel is immense and allowed him to install high quality machineries. “It’s kind of a revenge and in memory of my parents that I wanted to be at home and try to be self-reliant as it is the vision we fought for”, he added. Samuel’s childhood wasn’t an easy one. During the time of Ethiopian occupation, he witnessed the killing of his parents by Ethiopian soldiers.

It was devastating for this young boy at that time as he had to sustain himself and his sister from young age. He decided to bury his parents in their garden to keep them close to him. Later on, he decided to join the front.

At independence, he quickly figured out the benefits of his town, Dekemhare, as having high potential for tiles and bricks making due to the abundance of raw materials -sands and stones. As a result, Samuel established his factory, DM, in 1996. When I asked Samuel how he learned about the business, he said that he actually didn’t have specific knowledge about it but he learned on the job. He also saw the benefits of the raw materials available in his region. In fact, the owner was right. During the Italian colonial time Dekemhare and its surroundings were chosen for such type of business because of the raw materials and Dekemhare’s easy link to the capital, Asmara.

“I started at low scale and slowly grew up”, Samuel said while we walked around his immense parcel. Through time, DM factory gained reputation and contracts flew from all over the country including Massawa, the Anseba region, Southern and Central regions. “As demands increased we moved towards industrial production”, he added. This entrepreneur managed to bring his production capacity up to 2000 tiles per day in addition to producing bricks and cemented blocks.

With his welcoming family, Samuel showed me around and explained to me how the machineries were changed through time. In 2005, he bought new machineries from China allowing to move towards a digitalized method. “I can produce much more and with less time both for indoor and outdoor tiles and other products”, he proudly said.
Samuel’s business continued to grow in reputation allowing him to work with government institutions in providing materials for building asphalted roads and side-walks in

Dekemhare, schools in Nakfa and hospitals. The outdoor bricks and tiles used at Asmara Palace Hotel or Sembelino Club in Asmara were made by DM. The factory buys the stones, gravels and granite from Segen Construction Company and transforms them into tiles and bricks.

In his factory, Samuel can produce different types and sizes of tiles. It was a first in the country where the 20cm square was available. “Before, if one wanted to order bigger size, it had to be made manually, but with my machineries we can produce sizes up to 50cm square”, the owner added. Digitalizing his method of production has made the production of bricks and tiles faster and the burden of employees lighter. Besides, to make his business function effectively, Samuel installed his own transformer and a generator according to the health and safety regulations following an agreement reached with the concerned Ministry.

“If you have the good equipment, raw materials, good timing, monitoring and quality control, then you can only be successful”, Samuel said. Indeed, being meticulous and always ensuring good quality are what made DM one of the best factories in the country and, especially in the subzone of Dekemhare. As a matter of fact, the Ministry of Trade and Industry gave Samuel the quality control certificate level A for his products whereas the average in the subzone is C.

Samuel’s products go through strict production line making them competitive in local markets. Unfortunately, many Eritreans often perceived imported products as better than their local counterparts. “Many start to buy ceramics from Dubai or Sudan”, Samuel said. Cheaper products are surely influencing. But in terms of longevity, DM’s products cannot be surpassed. “While we have all the raw materials in our hands, we, Eritreans, make the mistake of looking outside and we don’t appreciate Eritrean made goods”.

Hence, with the economic hardship in the country, DM Company is also suffering and, as a result, 25% of Samuel’s income are now coming from quite a different sector of activity. “I just bought a cow in 1998 for my family’s consumption”, he said. As Samuel witnessed the economic difficulty, he then decided to increase the number of cows and make some profits. He now has about 35 cattle and 4 full time employees. “I didn’t realize it at the beginning but it’s always important to diversify”, he added. With his great parcel, Samuel managed to install modern dairy farm at home. He became a member of the milk producing cooperative and produces up to 200liters of milk per day which mostly is sold to Azieb’s cheese production factory in Dubarwa.

As being well-known for his production of bricks, tiles and other products, Samuel is also known in the region as one of the major milk producers. Samuel’s aims to increase his production and upgrade his business in the near future and hopes to one day pass on the torch of hard work to his children.