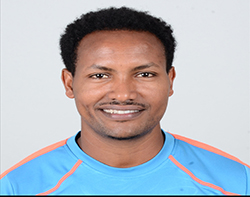 Meet Tedros Gebrezgiabhier, a microbiologist currently working as a lecturer at the Eritrean College of Sciences. After earning his bachelor’s degree in applied biology, he did an MSc in micro biology. He served in Sawa and EIT as a graduate assistant and is now paying attention to his research. With his project, Tedros wishes to make mushroom cultivation familiar among small farmers and families; a contribution that’ll definitely significantly influence the national plan of food security.

Meet Tedros Gebrezgiabhier, a microbiologist currently working as a lecturer at the Eritrean College of Sciences. After earning his bachelor’s degree in applied biology, he did an MSc in micro biology. He served in Sawa and EIT as a graduate assistant and is now paying attention to his research. With his project, Tedros wishes to make mushroom cultivation familiar among small farmers and families; a contribution that’ll definitely significantly influence the national plan of food security.

Welcome to our today’s Q&A. Would you introduce yourself to our readers?

My name is Tedros. I was born in Gash Bark in the Molki subzone, where I did my elementary schooling, and then moved to Mendefera where I completed my junior and high school education. I joined the 20th round and went to Sawa in 2006. Afterwards I joined EIT (Eritrean Institute of Technology) to complete my undergraduate education. I studied applied biology. I served in Sawa as a teacher and later on in EIT as a GA. In 2017, I began studying for my MSc. I did my postgraduate in microbiology. I am now a lecturer in EIT.

Your new research has been getting a lot of attention. Mostly because it is about something not common in Eritrea; can you tell us about it? How did it start and where has it gotten to at the moment.

What was the main scope of your project?

I wanted to take mushroom production to household level. I believe that families in Eritrea can profit from mushroom production. They can produce enough for their own consumption, and they can put the remaining amount out for the market. That would be a new contribution to the national plan of food security. That being said, mushroom production is not new to the world or even to some farmers in Eritrea. The different feature I aimed at studying was producing mushroom using kitchen waste that contains carbon and protein. The overall aim is to get families to produce mushroom with small and basic investment.

Are there any mushroom farmers in Eritrea?

There are; but few. They work under the umbrella of the Ministry of Agriculture. In fact, the first phase of my analysis was all about discussions and talks that I held with the producers. From there I started looking out for alternative methods to lower the production, like I said earlier, to household level. Speaking to the producers I realized that they have a recognized standard for their mushroom farming. That would be a bit costly if we are to promote it to small farmers and families.

So what is the alternative? Of course, based on your research?

As I told you earlier, the small production is very standardized. For example, they use sawdust, which might be expensive for small farmers or families to afford. So I did my experiment on materials that can be found easily at low price or no price at all. Kitchen waste such as used tea leaves and groundnut shells. These substances are found in every household. When collected they can serve greatly. Also, I conducted my experiment on cow dung, very common for small farmers in small villages and towns, and elephant grass as well.

So how do you plan to move on with the project? You have successfully done several experiments that assured you that edible mushrooms can be produced on kitchen wastes of Eritrean families as well as cow dung and elephant grass; also very accessible in towns and villages. What will the implementation look like?

The following part is implementation but before that people’s awareness should be raised. People are not aware of mushrooms. Shepherds in villages do know the edible mushrooms and they have them as snack but they don’t take them home for their mothers to cook. It is taken more as a woodland fruit. Only few people in the city are aware of mushroom dishes. After all, it is not a common food in Eritrea. For this reason,

mushroom is sold in a restricted market, at supermarkets, and in pizza houses as young people love mushroom on their pizzas. This clearly calls for integrated efforts of the media and the Ministry of Agriculture in raising awareness. People first need to know the value of it and then they can be taught how to grow it. Luckily, Eritreans are fast learners. In fact, we keep seeing new small businesses mushrooming in the cities and towns. People tend to follow new business trends. So if we, together, promote the idea, in a matter of two years mushrooms will dominate local markets.

Was it challenging to experiment with the production of mushroom?

The science of mushroom is a practiced science so common that it was not hard at all. Looking for materials that are locally accessible and cheap and experimenting mushroom growth on them was hard. I tried and failed many times. That is what was challenging. Other than that it was a very interesting venture because I had the vision in my head and I was determined to realize it despite the prolonged amount of time it needed.

Thank you and best of luck for future ventures. Would you like to pass any message before we end our interview?

I would like to thank my colleagues at the college and the Eritrean Ministry of Agriculture. Other than that I would just want to pass a reminder of how feasible household mushroom production is, and I call upon concerned bodies to take fast measurements.

Week of Festivity Winds up